Nick's Blog » My Criminal Past

You may think I’m just a chubby little guy who spends my days writing stories about cops and criminals, but you might be surprised to learn that I have a criminal past of my own. That’s right, I’ve spent some time in jail.

For part of my time in the Army I was a firearms instructor at the US Military Academy at West Point, which is located 60 miles north of New York City. This was back in the early 1970s, and New York had some very strange laws during that time period. When we weren’t training cadets, National Guard, and Army Reserve units, and providing support to local police agencies who wanted to use our ranges, we also got assigned to other duties. One of those duties was occasionally helping the MPs with things.

In one case, we had a guy who deserted after assaulting an officer. He was only gone about a week and his parents convinced him to turn himself in. So he flew into LaGuardia Airport and approached a security officer and said he was a deserter and wanted to turn himself in to the Army. They held him in a security room and called West Point, since that was where he had been stationed, and myself and another NCO were told to take a staff car and go down and pick him up. This happened on a Sunday.

So there we were, in our dress uniforms, leading him out of the airport in handcuffs. When we got to the car, a Transit Officer or something like that approached us and asked us why we were carrying handguns in New York City, and demanded to see our carry permits. We told him that we were picking up a prisoner, but that didn’t matter to him. We were not police officers, and we were not supposed to be carrying guns, as far as he was concerned.

He called his supervisor, who showed up and had the same opinion, so we were both arrested and taken to a precinct in Queens. It took about three hours for a JAG officer and our commanding officer to get there. The JAG officer said that we were doing our duty and they had no right to arrest us and explained that the law allowed officers and agents of the US military to carry weapons in the performance of our duties. The cops’ argument was that we were “noncommissioned” officers and not “officers,” and our rank did not say “agent,” so we were breaking the law.

It took a while, and a very angry Assistant District Attorney called in on a Sunday to get that all sorted out, but they finally gave us back our weapons and told us to get out of there, so we did. Five blocks away, the sergeant who had been with me asked, “What happened to the guy we were picking up?” We went right back to the precinct, and the fellow on duty at the desk said he had no idea, he remembered somebody sitting on a bench there for a while, but then he was gone. A week or so later, the guy showed up at West Point and turned himself in.

Another oddball thing there was that during the winter when we were not training cadets, we got assigned to all kinds of weird things. One of them was two weeks of recruiting duty every year. The Army rented a very small apartment somewhere in the city, where NCOs would stay and go out and talk to kids in high school, telling them about all the wonderful things that would happen to them in the Army.

It was a rough neighborhood and a couple of guys from another unit got mugged, and one of them was stabbed. The same JAG officer who had responded when we were arrested in the story earlier did some research and found out that at that time in New York City, black powder cap and ball revolvers were not considered firearms, they were considered “curiosities.” So several of us bought short-barreled .36 caliber replica revolvers, which were just as deadly as anything else you could shoot someone with, and carried them tucked in our belts under our uniforms. None of us ever had to use one of them, and I’m not sure what would have happened if we did, from a legal standpoint.

One final story from that time. Myself and another range master lived in a pair of small stone cottages across the road from the main rifle range, where we had a storage room full of weapons and ammunition. Since we were several miles from the main base, part of our job was to respond to any alarms going off on the range because we could be there long before the MPs could. And because of that, we were authorized to carry a .45 semi-automatic pistol even when off duty, and each kept an M-16 at the house.

One day I went to the main base to do some grocery shopping at the commissary, and as I was loading everything into the back of my new Mustang an MP pulled up and wanted to know why I had a pistol on me. I told him who I was and that I was authorized to carry, but he didn’t believe that, so he arrested me. Yes, I’ve been arrested twice! I showed him a letter from General Knowlton, the superintendent at West Point, requiring me to be armed, but he didn’t care about any of that.

It was a hot summer day and I said if he was going arrest me, could I at least take my ice cream back to the store so it did melt in the trunk of my car. He would let me do that. It being a Saturday (I always seem to get in trouble on the weekends), it took a while to get hold of my commanding officer, who then got hold of the MP commanding officer, and the excrement hit the oscillating device.

Long story short, when I was released and got back to my car, two half-gallons of ice cream had melted into the carpeting of the trunk. I was not a happy camper. My CO was a great guy and reminded me that the MPs had to qualify with their weapons every six months, and as range master, my word was God on the range. If I didn’t feel someone qualified, they would have to reshoot on another day at my convenience. Amazingly, all 47 members of the MP company failed their qualification in one day. As did their commanding officer, executive officer, and First Sergeant. Once again, the excrement hit the oscillating device. But there was nothing they could do about it. It was very convenient for me to drive across the road and open the range for them to requalify, and I did, two at a time over several days when they were scheduled to be off duty. Don’t ever piss off the range master.

Congratulations Karen Keeley, winner of our drawing for a printed copy of The Twofer Compendium, a collection of 36 twin-themed short stories written by 34 international authors that leap across genres from science fiction to whimsical, to downright creepy. We had 43 entries this time around. Stay tuned, a new drawing starts soon. 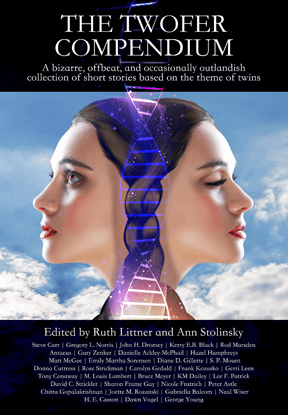 Thought For The Day – If a gingerbread man breaks his leg, does he walks with a candy cane?

7 Responses to “My Criminal Past”