Television has taught us that journalists and the police are always at odds with each other, sworn enemies who will never come to any kind of middle ground. The reporters are pushy and don’t care about anything but getting the story, and if they can throw a cop under the bus to get it, even better. For their part, the police in movies and television are necessarily wary of the press and often go out of their way to be rude to them. In reality, this may be true in some places, but not nearly to the extent that Hollywood would want us to believe.

In the small towns where I operated newspapers, I always had a very good relationship with the police. Part of that was because of my own background, and part was because I understood that there were times when they could not tell me something, and I respected that. I never believed that “the people’s right to know” was sacrosanct. There are times when the people can’t know all the details of a case until the investigation is over because there may be other people out there that law enforcement is still looking for.

In my newspaper in the White Mountains of Arizona, the police chiefs of the towns of Pinetop-Lakeside and Show Low were friends of mine, and we shared a mutual respect. We were also all three into classic cars and belonged to the same car club. At the time, one of those police chiefs had a red Corvette. I don’t remember the exact year, but it was a nice one. For my part, I had a red 1969 Corvette Stingray that looked like it was doing 100 miles an hour sitting still. 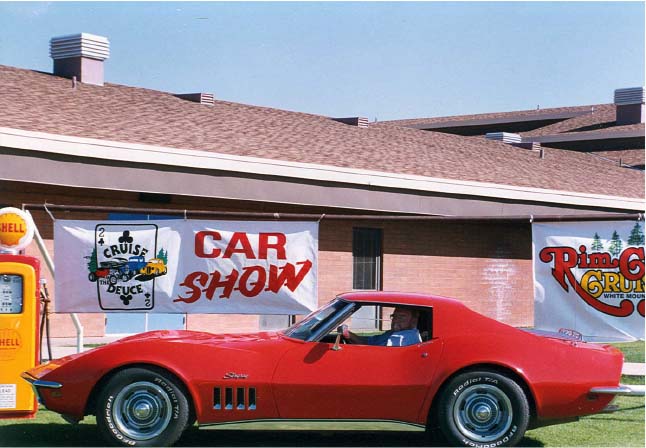 I’ve been known to have a lead foot at times, and more than once, an officer has lit me up just to remind me to slow it down a little bit. There is no question about it, there were times when I deserved a ticket, but I got by with a finger pointed at me and a shake of the head no. I remember once when that led to a funny story.

The police chief and I were having lunch one day when one of his officers, who was off duty, came into the restaurant with his wife and kids. Once they were seated, the officer, who was also a friend, came over to the table and looked at me, and said, “Chief, you’ve got to tell your buddy to slow it down. I clocked him doing 57 in a 45 mile per hour zone last night in his Vette.”

The chief looked at me, and I shook my head and said, “It wasn’t me. My Corvette hasn’t been out of the garage in a week.” The chief knew me enough to know that I wouldn’t lie about that, so then the officer looked at him and said, “Boss, I guess you’re the one that needs to slow it down.” Shaking his head, the chief said he had not been in his Corvette in several days.

The officer stared at both of us and realized that he had let the opportunity to write a perfectly good ticket slip through his fingers. He said next time he would get close enough to run the license plate. The police chief laughed and said that if it was my car, to write me up anyhow. I was going to mention the time he blew my doors off when I was doing 75 out on U.S. Highway 60, but I didn’t. You never know when you’re gonna need a favor from the boys in blue.

Thought For The Day – Do you want to know the secret to making your lover go “mmm mmm mmm” all night long? It’s duct tape