The world exists in many dimensions, limited only by our own imaginations. At the Mini Time Machine Museum of Miniatures in Tucson, Arizona, the big and the small exist side by side, each a reflection of the other, scaled up or scaled-down, depending on your point of view.

Created from the imagination and dedication of its founders, Patricia and Walter Arnell, the museum is a fascinating collection of miniature buildings accurate to the tiniest detail, a world of whimsy, and a trip back in time and to the land of fairytales, all in one. Male or female, young or old, no matter who you are, this wonderful museum will captivate you.

Patricia Arnell’s interest in miniatures began when she was a young girl in the 1930s and received her first miniatures, a set of Strombecker wooden dollhouse furniture. But it wasn’t until the Arnells moved to Tucson in 1979 that she began collecting in earnest. The Arnell’s became very active in the miniature community, and as their collection grew, they dreamed of a way to share it with more people. They envisioned an interactive space where the entertaining and educational aspects of the collection could be enjoyed by everyone; a place that would be enchanting, magical, and provide a rich sensory experience.

The concept of “the mini time machine” was born out of the notion that a visitor would be seemingly transported to different eras by the stories and history of the pieces in the collection.

The museum’s artifacts are organized into three main areas; the Enchanted Realm, the History Gallery, and Exploring the World.

The Enchanted Realm is a magical place and the pieces displayed in this gallery reflect that. Here you will find woodland creatures, snow villages, fairy castles, and a witch’s compound. If you don’t believe in wizards and elves when you enter, you may be by the time you leave. 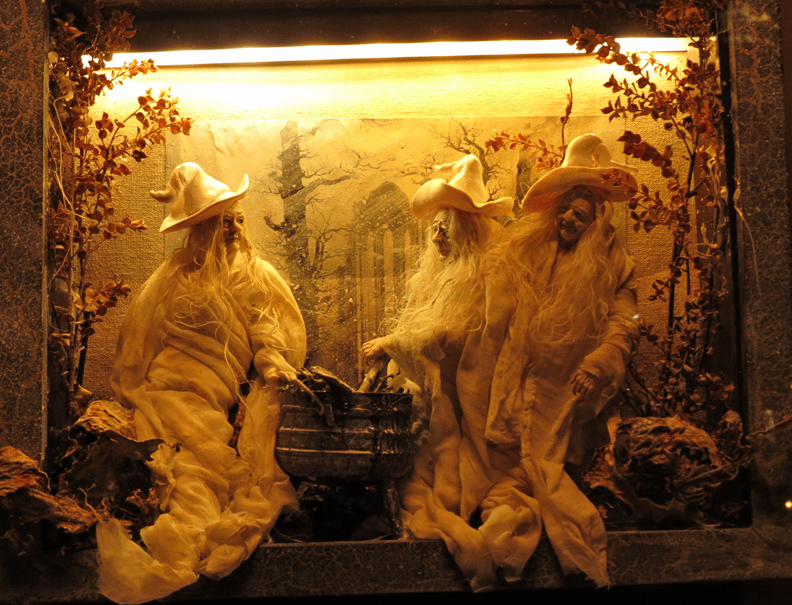 The gallery includes a fine collection of Kewpie dolls, the creations of artist and writer Rose O’Neill, who started illustrating for magazines such as Collier’s and Harper’s Bazaar while still a teenager. O’Neill conceived the idea of the cartoon-like dolls for a feature in the December 8, 1908 issue of Ladies Home Journal. She had no idea how quickly they would capture the hearts of the nation. Before long, Kewpies were appearing in comic strips, on postcards, plates, pillows, cereal and Jell-O boxes, and countless other products. The dolls quickly became a worldwide phenomenon, making O’Neill a millionaire practically overnight. 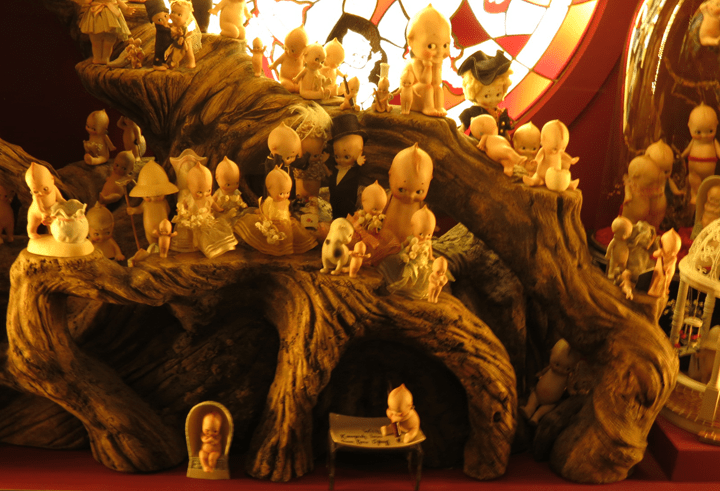 I am a fan of artist Thomas Kinkaide and was delighted to see several of his Christmas cabins in the collection. 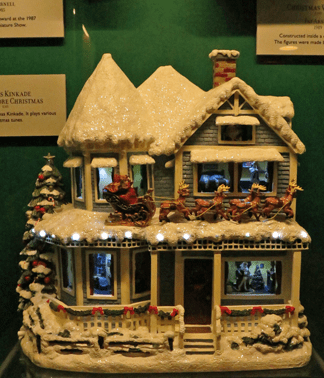 The pieces in the History and Antiques Gallery reflect different time periods and have historical value and significance. One of the oldest miniature houses in the United States, circa 1775, is part of this collection.

One of the miniature houses on display is a mansion called Lagniappe, a French Creole word meaning “a trifle extra.” The name is a modest description of this stunning re-creation of the fine homes built throughout the Virginia tidelands during the 18th Century. Each room features a particular decorating style and period, such as the Spanish Renaissance Room, the Ming Dynasty Room, and the American Empire Bedroom. The Brass Room is filled with almost all brass furnishings, and the floor, walls, and fireplace are trimmed in brass. 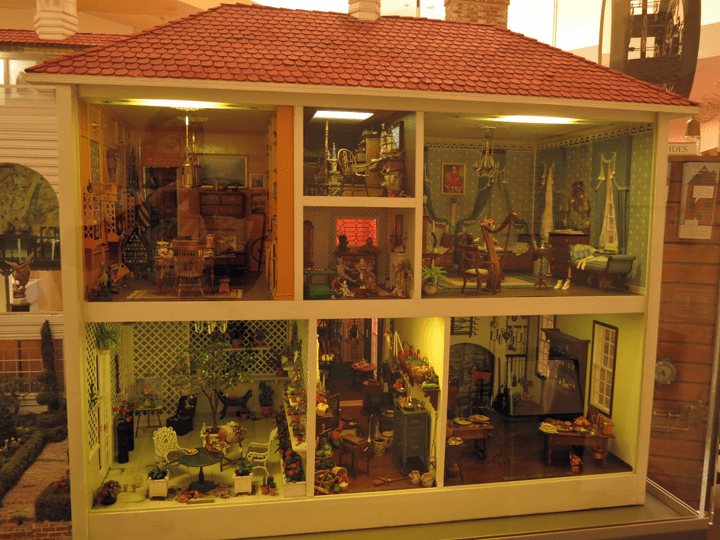 Master miniaturists use many of the same tools and techniques as craftsmen and artisans producing full size work. Wood is cut with precision saws, turned on lathes, or carved with chisels. Metal is snipped and soldered. Clay and porcelain are shaped by hand and fired in kilns. The only difference is in the scale of the equipment – miniature art requires miniature tools.

Whenever possible, a miniature is made from the same materials as its full-sized counterpart. Wood, stone, fabric, even glass, and precious metals are used in the tiny buildings and their furnishings.

A true masterpiece of miniature art reproduces exactly its life-sized counterpart down to the smallest nail or stitch. Producing miniature textiles requires special care since ordinary threads and stitching often look out of scale when used in a miniature. Miniature rugs that reproduce the patterns and textures of finely woven carpets are especially challenging. Traditional needlepoint typically employs thread counts of anywhere from 5 to 24, while in contrast, a miniature rug might have a thread count of 30 or 40 in order to look realistic. 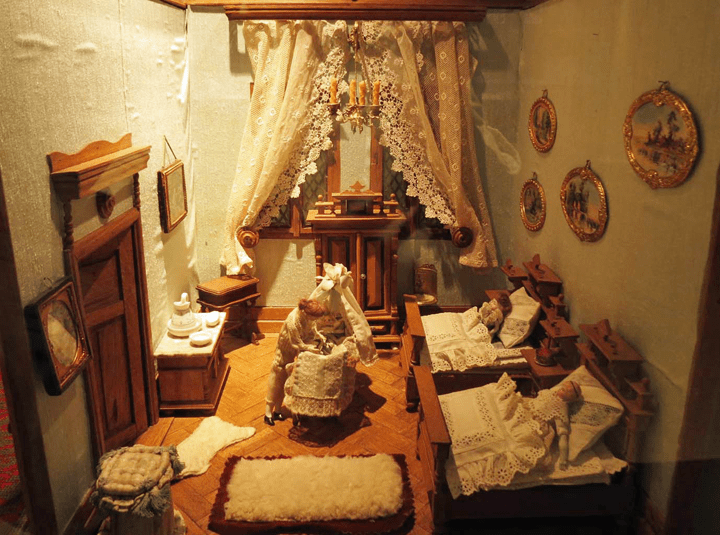 The Scottish Regency mansion dates back to the 1950s or 60s and is a copy of an earlier miniature on display in an English museum. 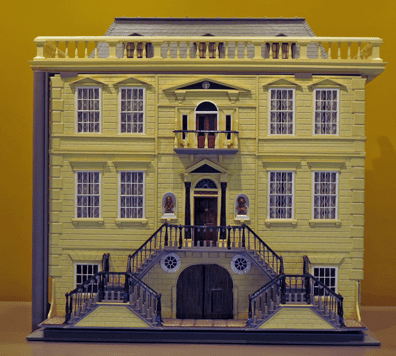 Is it possible for a miniature house to be haunted by a miniature ghost? You might think so after hearing the story of the reproduction John Bellemy made of his own stately home on West Newton, Massachusetts in the 1880s. While it’s not known if Bellemy’s actual house was haunted, it seems that the miniature might have its own tiny poltergeist. While in museum founder Patricia Arnell’s original display room, the house was routinely disturbed in the middle of the night. Miniature chairs in the office would be found moved across the room and in the kitchen, a tiny toast rack would be moved from the stove to a spot on the floor beneath the table. How did that happen? Nobody has an answer to the mini-mystery. 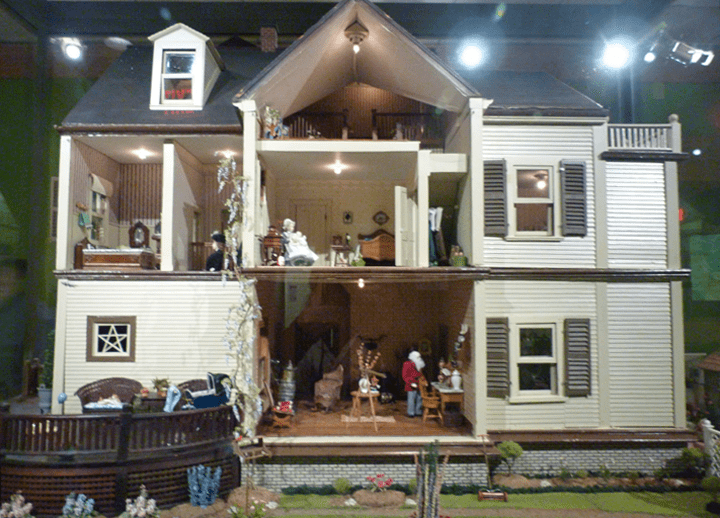 Once the purvey of the wealthy, collecting miniatures became popular with people of all social classes by the mid-1800s, with railroads crossing the country and industrialization reducing the price of manufacturing and delivery.

A typical kit for a miniature house would include all of the necessary patterns, colorfully printed paper for interior and exterior walls and the roof, and detailed instructions on the right materials to use and how to assemble everything. While the finished house might not be to exact scale, it didn’t matter to the new miniaturists proudly displaying their first completed projects. 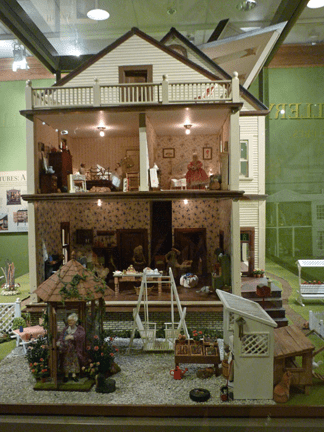 The R. Bliss Manufacturing Company started out making screws and clamps in Pawtucket, Rhode Island and expanded into the toy business. Combining their expertise in woodcraft with new inexpensive lithographic printing, they began creating simple wooden forms into colorful blocks, pull toys and doll houses. Advertised and sold through catalogs, the Bliss toy catalog was considered as important to children of that era as the Sears Roebuck catalog was to their parents. While not to scale and often a hodgepodge of different styles, Bliss houses have a distinctive charm that makes them popular with miniature collectors.

The Exploring the World gallery displays examples of how miniatures are used in other cultures, with items from artisans representing the U.K., France, Germany, Holland, Italy, Japan, Thailand, and Spain, among others.

Miniatures also have practical applications. Architects have used scale models of their buildings to sell their designs to clients, often spending hundreds, even thousands of dollars to produce these small three-dimensional examples of their work. Theater and motion picture directors use miniature models to create set designs and lighting to see how the action will look before cameras and crews are brought in. Occasionally a scale model is actually used in movie and television shows. Special effects artists have used miniatures to stand in for everything from ancient castles to spaceships. Such classics as Ben Hur, Citizen Kane, The Wizard of Oz, King Kong, and Star Wars all used skillfully created miniatures.

If you have an interest in collecting or creating miniatures, the people at the Mini Time Machine Museum of Miniatures say you don’t have to be a master craftsman or spend years building a huge collection to join the growing community of miniature enthusiasts. The world of miniatures welcomes anyone with even a casual interest in this unique art. One way to get started and meet like-minded people is to visit a local miniatures club or attend one of the many events sponsored by national miniature groups, where you will find workshops and demonstrations, and see a wide variety of tools and miniature supplies offered by vendors.

And don’t be surprised if you do come away from a visit to the museum with a newfound appreciation for and interest in the miniaturists’ art. After seeing the museum collection of over 275 miniature buildings and thousands of finely crafted furnishings and accessories, it would be hard not to be.

The Mini Time Machine Museum of Miniatures is located at 4455 E. Camp Lowell Road in Tucson and is open Wednesday – Sunday from 9 a.m. to 4 p.m. and Sunday from noon to 4 p.m. The museum is closed Mondays, Tuesdays, and major holidays. Admission is $10.50 for adults, $8.50 for seniors over age 65, $7 for students and those ages 4 -17, and children age 3 and under are admitted free. The parking lot at the museum is not appropriate for RVs, so park your rig at one of Tucson’s many RV parks and drive your tow vehicle or dinghy. For more information, call the museum at (520) 881-0606 or visit their website at https://theminitimemachine.org/

Thought For The Day – Spiderman wears a mask. So can you.

One Response to “Tucson’s Miniature Museum”