Nick's Blog » Back To My Roots

I grew up in a very different world than the one we live in today. Before I was 10 years old I already knew what I wanted to be. Not a jet pilot or an astronaut or a professional baseball player. No. All I ever wanted to be was a newspaperman and to write books.

Somewhere around my ninth year, as I recall, I convinced our local newspaper publisher to give me a job. But not just any job. I didn’t want a paper route or to stand on the street corner hawking newspapers. I wanted to work in the shop. I wanted to be one of the first to see each new edition come off the press. After I nagged the gentleman enough, he talked to my father, who agreed to let me work a couple of hours after school two or three days a week.

I became what was known as a printer’s devil. This was in the days when printing was done with lead type, and my job was to clean the old handset type with a rag and gasoline, and then put each letter and space into the proper place in the type cabinets. I know that sounds unbelievable now, and even then I’m sure it must have violated some kind of child labor laws, but as I said, it was a different world back then. Besides, who was working? I was having a ball!

I’m not a mechanical person at all, but I fell in love with the old letterpresses the shop used, everything from massive things almost as big as an automobile that printed newspaper pages, down to small hand-operated job presses that were used to print business cards, letterheads, envelopes, and things like that. In those days a big part of a newspaper’s income was from job work like that. Eventually I learned how to set type by hand, one letter at a time in reverse, and to run the job presses. And I went on to own several small town newspapers in my career, and my 41st book came out last week.

A few years ago when Terry and I went to Mystic Seaport in Connecticut, the person who usually worked in their print shop was out sick, and the young man filling in for him had no idea how type was set by hand and was doing a very bad job of explaining it to visitors. So, I offered to show them. It had been close to 50 years since I had set type by hand, but somehow I managed to remember enough to get it done, and I impressed the young man, the people watching, Miss Terry, and even myself!

As I’ve mentioned before, Terry and I like antiques, and we are always looking for something interesting or unusual to add to our collection. So when my neighbor Chris Fisher, who happens to be an auctioneer, called me over one day to show me something he thought I might like, I immediately began drooling. He had acquired an old Baltimorean self-inking letterpress. There was also a cabinet full of lead type, which I didn’t really care that much for as I don’t plan to use any of it, and the cabinet was falling apart. But I definitely wanted that printing press! From everything I’ve been able to research about it, this model was built about 1886 and sold for somewhere around $40 – $60, depending on the market.

Well, the auction ended Thursday night, and this is my new baby. It’s rusty and frozen up, and the rollers are shot, but I don’t care. I have no idea what I’m going to do with this thing, but I’d like to clean it up a little bit and display it somewhere, just a little reminder of my roots. 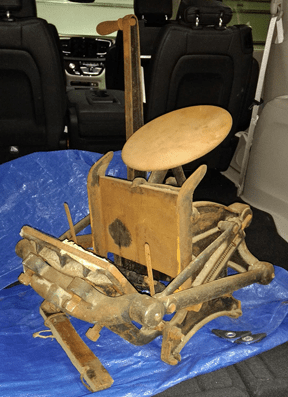 Besides going to the auction house in Daytona Beach to pick up the press yesterday, we also went to the dealer where we bought Terry’s Chrysler Pacifica minivan. When we bought it, we also got an extended warranty that includes free oil changes, filters, and tire rotations for 100,000 miles. The van has just over 30,000 miles on it now. The dealership lied to us about several things and failed to follow through with things they promised, so even though I have to drive out of my way to get the oil changed instead of using my local shop that does all of my other mechanical work, I’ll be damned if I’m going to let that stop me from getting what I have coming.

I cannot count how many emails and messages I’ve received from people worried about us, with Hurricane Isaias headed our way. We do appreciate your concern, but we’re not too worried about this one, folks. We are 800 yards from the Intercoastal Waterway, and about a 1½ miles as the crow flies from the Atlantic. But the Canaveral National Seashore and the mangrove hammocks of Mosquito Lagoon are between us and the ocean, and they do a pretty good job of slowing storms down. Every weather report says that it’s going to be here sometime early Sunday morning, but they say it will most likely stay offshore.

We will still get some pretty strong wind, lots of rain and things like that, and possibly some power outages. But we are well-stocked with provisions and plenty of bottled water, we have two Honda generators and lots of fuel, sandbags, and everything we need to get by.

Some friends have asked me if we didn’t think it would be a good idea to evacuate. I really think this is going to be a non-issue. Of course, I could be wrong. But lots of hotels are still closed in the places we would want to go, so we will ride it out. Come Monday, we might wish we had made another decision, but that’s where we’re at at this point.

It’s Thursday, so it’s time for a new Free Drawing, and we’ve got another great prize this week. This week’s prize is an audiobook of Dead Letter by Catherine Bender. The first book in the M. Falcon mystery series, it’s the tale of amateur detectives in their golden years with a treasure trove of unexpected skills and unconventional tactics, including a sweet wheelchair bound grandmother type who is a master computer hacker, a semi-retired actress who seizes the opportunity to live her dream of being a super spy, a homeless veteran, and other blue hairs who are not content to rock their lives away in boring retirement. To enter, click on this Free Drawing link or the tab at the top of this page and enter your name (first and last) in the comments section at the bottom of that page (not this one). Only one entry per person per drawing please, and you must enter with your real name. To prevent spam or multiple entries, the names of cartoon or movie characters are not allowed. The winner will be drawn Sunday evening.

Thought For The Day – Work is precious. Save some for tomorrow.

One Response to “Back To My Roots”