After a lifetime of dedicated service to her country, one of America’s greatest warships is now a floating museum, dedicated to informing the public of her proud heritage and the history of Naval aviation.

The Essex-class aircraft carrier USS Lexington (CV-16), known as The Blue Ghost, was the fifth ship named in honor of the Revolutionary War Battle of Lexington. When construction began on the ship in 1941, her original name was to be the USS Cabot, but she was renamed USS Lexington after the loss of her namesake in the Battle of the Coral Sea. She was launched in September of 1942 and commissioned on February 17, 1943.

Lexington arrived in Pearl Harbor on August 9, 1943, and was in battle at Tarawa in late September, and Wake Island in October. In November, her aircraft were covering American landings in the Gilberts, downing 29 enemy airplanes.

In early December, Lexington took part in raids against Kwajalein, sinking a Japanese cargo ship, damaging two cruisers, and downing 30 enemy aircraft. She was hit by a torpedo, the blast destroying her steering gear and killing several crewmembers. Japan’s Tokyo Rose reported that the aircraft carrier had been sunk, a claim she would make several more times during the war, earning Lexington the nickname Blue Ghost.

Lexington limped back to Pearl Harbor for emergency repairs, then went to the Navy Yard at Bremerton, Washington for a complete refurbishing. Lexington was not out of the action long; by February 1944, a mere 78 days after suffering such heavy damage, Lexington was headed back to the South Pacific. By March she was back in the war, participating in engagements against some of Japan’s most important outposts, including Truk, where her aircraft and quad 40mm guns knocked 17 enemy fighters out of the sky. For the second time, Japanese propaganda announced that Lexington had been sunk.

In June, she saw action at Saipan and fought off a fierce attack by Japanese torpedo planes, coming out of the battle unscathed, but again reported sunk by Japan’s propaganda machine. A few days later Lexington took part in the famed Marianas Turkey Shoot in which American aviators shot down over 300 enemy aircraft in one day, and sank a Japanese aircraft carrier, a tanker, and a destroyer. The battle all but ended Japanese naval aviation for the rest of the war. Lexington’s gun crews actually shot down Japanese planes as they tried to land on her deck because they had nowhere else to land!

Lexington took part in the Battle of Leyte Gulf in early November, her planes helping sink the Japanese battleship Musashi and the carriers Chitose, Zuikako, and Zuih, and the heavy cruiser Nachi.

On November 5, a Japanese kamikaze crashed into Lexington’s island, destroying most of the island structure and spraying fire and debris in all directions. Fifty crewmen were killed and 132 injured in the crash. Within minutes the valiant warship was back in the battle, conducting normal flight operations, and her 40mm guns knocking down a second kamikaze heading for the aircraft carrier Ticonderoga. Once again, the wishful Japanese claimed to have sunk the Lexington. 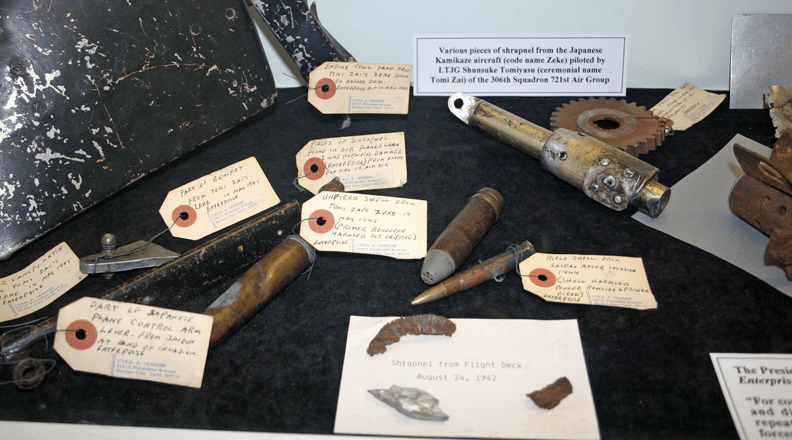 After further engagements against Saipan and Okinawa, and a second overhaul at Bremerton, Washington, Lexington participated in assaults as American forces beat the Japanese back toward their homeland, launching the final round of airstrikes which battered the Japanese into submission. With the Japanese surrender, she was the first aircraft carrier to steam into Tokyo Bay.

By war’s end, Lexington had participated in nearly every major operation in the Pacific Theater and spent a total of 21 months in combat. Her planes destroyed 372 enemy aircraft in the air and 475 more on the ground. She sank or destroyed 300,000 tons of enemy cargo and damaged an additional 600,000 tons.

After the war, Lexington was decommissioned at Bremerton, Washington. But by October, 1952, work began to modernize Lexington, and she was re-commissioned in 1953, just after hostilities ceased in the Korean War. She saw duty as an attack carrier during the Cuban missile crisis, and then as a training ship for Naval aviators, based out of Pensacola, Florida. The pilots who learned to fly off of her deck would go on to see combat over Vietnam. On October 17, 1967, Lexington celebrated her 200,000th aircraft landing.

After 22 years as a training ship, Lexington was again decommissioned in November, 1991, and on June 15, 1992 the ship was donated to the city of Corpus Christi, Texas as a museum. She was the oldest working carrier in the United States Navy when decommissioned. She served the United States longer and set more records than any other carrier in the history of naval aviation. During her long and distinguished career, the crew of the Lexington received the Presidential Unit Citation for heroism in action against enemy Japanese forces, 11 battle stars for major engagements during World War II service, and numerous other awards. 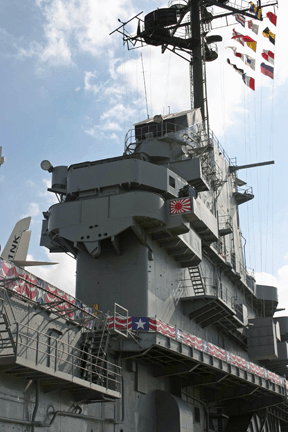 Today the grand old ship is the USS Lexington Museum on the Bay at Corpus Christi. Visitors can tour the Lexington and learn about her history and the role she played in protecting our nation’s freedom.

Nineteen vintage aircraft are displayed on the Lexington’s flight deck and hanger deck, demonstrating the evolvement of naval aviation. 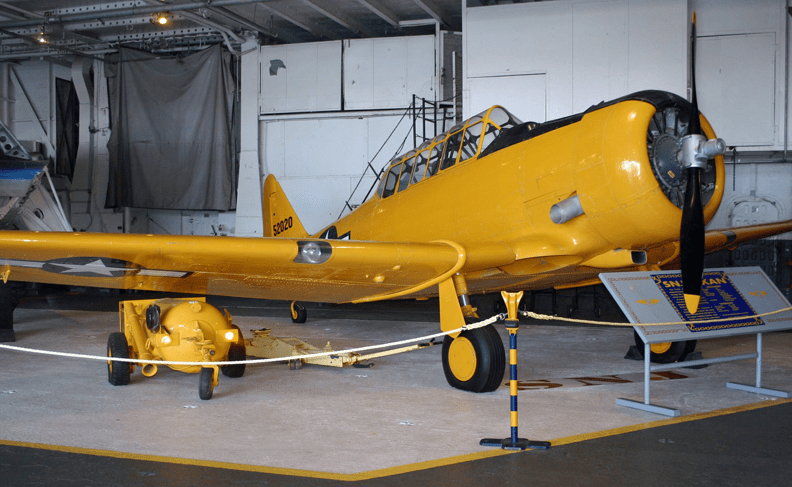 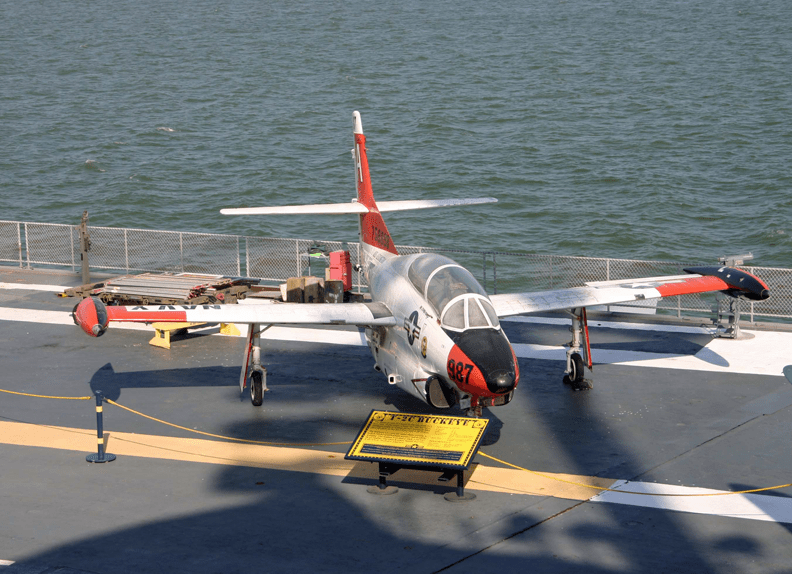 The flight deck is massive, 910 feet long and 142 feet wide. To put that into perspective, you could park over 1,000 automobiles on the flight deck, which covers the equivalent of two acres! You could play three football games or fourteen basketball games at the same time on Lexington’s flight deck. From here, high-speed catapults launched aircraft into the air, and strong arresting cables pulled landing aircraft to a safe stop. 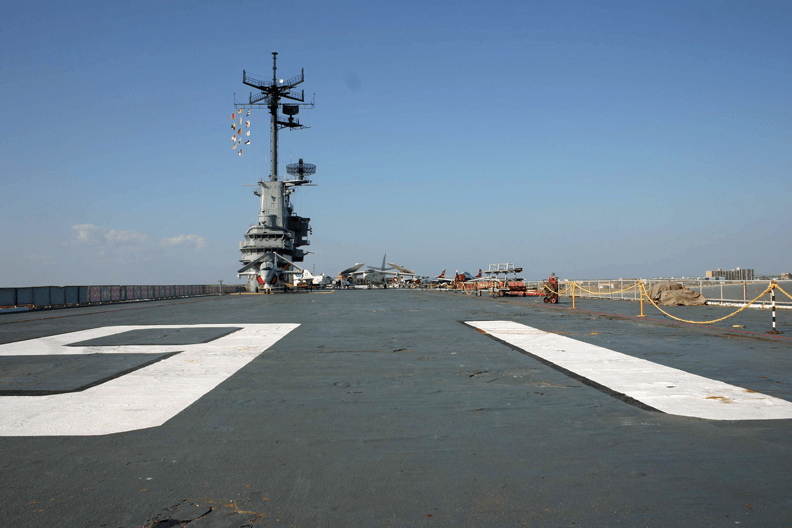 Climbing a series of steep ladders (get used to climbing when you visit Lexington, the tour calls for a lot of it), visitors arrive at the ship’s island, high above the landing deck. This was the control center of the ship, where the commanding officer gave his orders and directed shipboard operations. The island includes command and control areas, as well as the Navigation Bridge, Pilothouse, Captain’s Sea Cabin and Chart House.

The gallery deck, just below the flight deck, is the Combat Information Center, which collected and evaluated all information on the status of the Lexington, other friendly ships, and enemy forces. The CIC directed the ship’s performance in close coordination with the air operations center and the carrier air traffic control center next door.

During wartime the hangar deck stored as many as 60 aircraft. Maintenance, refueling, and re-arming of aircraft took place here. Unchanged in size since World War II, the hangar deck measures 654 feet by 70 feet, is 17.5 feet high, and covers 40,000 square feet. The deck is divided into three bays that could be sealed off by electrically operated fire doors. A Mega Theater (similar to IMAX) was added in the forward aircraft elevator space. Visitors can see an inspiring film on the training of fighter pilots in the theater.

Other below deck exhibits include crews’ sleeping quarters, the ship’s post office, medical and dental bays, and special exhibits on the role Lexington played during World War II, her crew, and those lost in combat.

Though some areas of the ship are handicapped accessible, during our visit the escalator was out of order. The hangar deck, pier, and the Mega Theater are handicap-accessible. The Ship’s Store, the Mess Deck, and restrooms are also accessible. Admission is free for wheelchairs.

However, to tour most of the ship involves a lot of climbing and stepping over raised hatchways. Visitors are urged to wear comfortable walking shoes. Friendly volunteers wearing yellow shirts, many of whom actually served aboard the Lexington, are always available to answer questions or assist visitors. Plan on two to three hours to tour the entire ship. 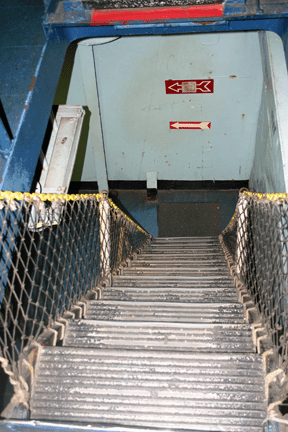 The USS Lexington Museum on the Bay is totally self-sufficient, never having received funds from any government agencies. The museum relies solely on revenues generated from grants, donations, admissions, ship’s store sales, special events, and its youth overnight program. These revenues have covered all expenses not only to operate and maintain the ship but also to fund all capital improvements as well.

The USS Lexington Museum is open seven days a week from 9 a.m. to 5 p.m., except for Thanksgiving Day and Christmas Day. Convenient all day parking for automobiles is available. Large RVs would have a hard time getting into the area and finding a parking place. Driving to the ship can be difficult because there are many one way streets, and signage is confusing.

Thought For The Day – Don’t limit your challenges, challenge your limits.