Note: This story is from my book Highway History And Back Road Mystery II.

The North Woods had Paul Bunyan, and west Texas had Pecos Bill, but frontier Florida had its own larger than life character, whose exploits were just as wild and woolly. The only difference was that, unlike those mythical folk heroes, Acrefoot Johnson was a real person!

James Mitchell Johnson was born on February 28, 1850, in Columbia County, Florida. He was the third of eight children of Elias and Elizabeth Johnson. The family moved to a homestead in Manatee (now DeSoto) County in 1866. His father, Elias, had been a sergeant in the Confederate army during the Civil War.

Big even as a child, his growth continued into adulthood. At 6’7” tall, and over 250 pounds, he was an impressive man. His size fourteen shoes earned him the nickname “Acrefoot” because, as one observer said, “that boy can cover an acre in a single step!”

Local lore says that he could chop more wood in a day than a crew of five men could in a week, and that nobody liked working with him because he could chop palmettos faster than any man could stack them. At the end of the day, while his co-workers could barely drag themselves off to dinner and bed, Johnson was just getting his second wind and was ready to play his fiddle and dance all night long.

James married Margaret Isabelle Chester in Fort Ogden, Florida on January 22, 1877. At that time, Fort Ogden was a small settlement of some forty families, a couple of stores, a blacksmith shop, a post office, and two churches.

Raising a family on the earnings of a small pioneer farm was challenging, so when he learned that an overland mail route was being established between Fort Meade and Fort Ogden, a distance of 75 miles, he applied for the position of mail carrier. The job paid $26 a month, a good wage in those days, and there were several applicants. James and a gentleman named Big Ed Donaldson, who had earned fame as an Indian fighter during the Seminole Indian Wars, made the final cut.

According to legend, Donaldson promised to make the round trip between Fort Meade and Fort Ogden once a week, regardless of “hurricanes, rattlesnakes, Indians, or robbers.” That was all the postmaster needed to hear, and he was about to award the contract to Donaldson, when James Johnson interrupted and said that if Donaldson could make the trip once a week, he (Johnson) could do it twice a week, and maybe even three times!

It was decided that the best way to choose was to have the two men each carry a mail parcel over the route, and whoever completed the trip first would get the job. Setting out at daylight the next morning, for the first ten miles they made the same speed, but as the terrain grew rougher, Johnson soon left the other man behind with his long strides. He delivered his mail sack to Fort Ogden by the end of the day, then played fiddle and served as the caller at an all night long square dance, before setting off on the return trip to Fort Meade the next morning. Partway into his return trip, he met up with Donaldson, who was finally nearing Fort Ogden.

Acrefoot Johnson was awarded the contract, and for the next ten years he made two, and sometimes three trips a week along the primitive mail route, always arriving on time. There are wild tales about his adventures, some probably true, and others more myth than fact.

One story has him swimming across a river and encountering three large alligators, which he quickly dispatched with his pocket knife, then climbed out on the far shore, shook himself dry, and continued along his way.

Another time, three outlaws tried to rob him at Joshua Creek. Johnson hardly broke a sweat as he beat them out of his way with mighty blows from his huge hands, yelling “That’ll learn you to try to rob the U.S. Mail!” as they retreated, licking their wounds.

Outlaws and alligators were not the only dangers to be encountered on the mail route. Once, a panther pounced on his back and mauled Johnson before he could reach back and break its neck. As the local doctor was patching him up, Acrefoot complained that it wasn’t “sportin” for the big critter to jump him from behind like that.

Johnson walked fast and could cover a lot of territory in a short time with his long legs. Once, he met up with Judge King, who was riding a handsome stallion, on the way to Fort Ogden. When King offered him a ride, Acrefoot said “Thanks, but I’m in a hurry.” This offended the judge, who spurred his horse into a gallop and left Johnson in his dust. But by the time he got to the little village, the mail carrier had passed him and was sitting in front of the general store, smoking his pipe and talking to some local fellows when King rode onto the scene.

Acrefoot could easily pass horse drawn buggies, and one story has him outrunning a steam locomotive. He once said that he turned down an offer to work for the Pony Express because he felt the horse would slow him down too much.

Legend says that, as his family grew, Acrefoot needed more money to support them, so he outfitted a wooden chair with shoulder straps to create a backpack, and began carrying passengers along his mail route until the postmaster decided it was a conflict of interest and ordered him to stop.

In the 1880s, the railroad began pushing into the area, and when Acrefoot lost his contract to the railroad, he moved to Nocatee, where he earned a living cutting cross ties for the railroad and supplying cordwood to fire the steam trains’ boilers. He also ran a blacksmith shop, and hunted snakes and alligators.

Johnson was getting up in years, but he was still a hardworking man when he suffered a fall from a scaffold while helping build a school in Nocatee when he was in his late 60s. He never fully recovered from his injuries but his fame never stopped growing, and even today, old timers in Florida enjoy regaling folks with stories of his exploits.

James Mitchell “Acrefoot” Johnson died in 1922, and is buried in Kabrich Cemetery in Nocatee. His tombstone is inscribed, “Cross Country Walking Mail Man. Affectionately Known As Acrefoot Johnson. His Creed – The Mail Must Go Through.” Florida’s fabled “walking man” was finally at rest. 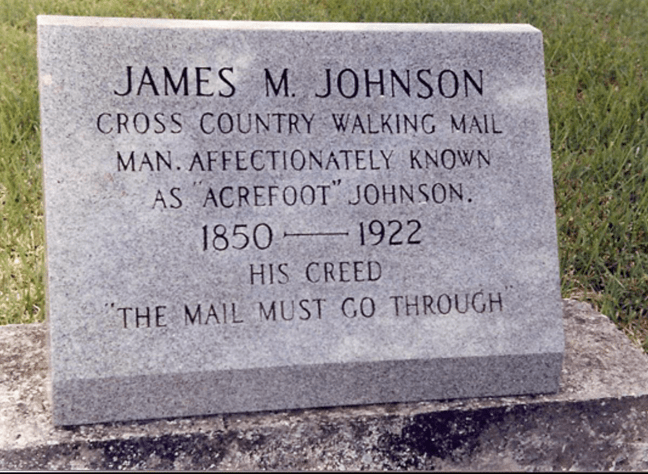 Thought For The Day – It’s simple, if it jiggles, it’s fat.

One Response to “The Legend of Acrefoot Johnson”