After reading yesterday’s blog post Stepping On Toes, in which I mentioned receiving death threats and being assaulted during my time publishing small town newspapers, a couple of blog readers said they would like to hear some stories from those days. I’ve definitely got some stories to tell, and they don’t all involve death threats or things like that. Some are even downright funny.

For many years I published a weekly newspaper in northern Arizona’s White Mountains. East of the small town of Snowflake there is a rather desolate area that everybody calls “east of Snowflake,” appropriately enough. A lot of real Looney Tunes live out there because you can get land for almost nothing. Granted, most of it has no water or power, but if you are a doomsday prepper, an anti-government militia type, or just a hermit who wants to be away from people, that was, and still is, the place to be. People live in shacks they had thrown together, old mobile homes and travel trailers and school buses they have pulled out there, and at least one I know of lived in a cave. Yeah, he was a real caveman. These folks are suspicious of outsiders and even wary of their neighbors who live close enough to a road to have utilities and telephones.

Today is your last chance to enter our Free Drawing for an audiobook of Cops and Writers: From the Academy to the Street by my friend Patrick J. O’Donnell. Patrick recently retired from the Milwaukee, Wisconsin Police Department, and runs the Cops and Writers Facebook page, which is a valuable resource for anyone writing mysteries or crime thrillers. If you have ever wondered what it’s like to be a police officer, this is the book that tells you how it all gets started, from basic training at the police academy to hitting the streets as a rookie patrol officer working with a Field Training Officer (FTO), along with a lot of other information about things like arrest techniques, different types of police assignments, and stories from Patrick’s own experiences in the trenches. Even if you’re not a writer, this is a book you will enjoy. To enter, click on this Free Drawing link or the tab at the top of this page and enter your name (first and last) in the comments section at the bottom of that page (not this one). Only one entry per person per drawing please, and you must enter with your real name. To prevent spam or multiple entries, the names of cartoon or movie characters are not allowed. The winner will be drawn this evening. 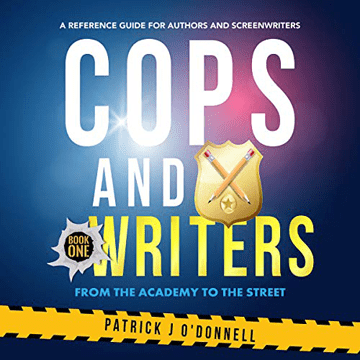 Thought For The Day – I’m not very good at giving advice. Could I interest you in a sarcastic comment instead?