I discovered something the other day that I was not aware of. Microsoft Word in Windows 10 has its own dictation program. How did I not know that? I haven’t done much with it yet except to test it with a few short paragraphs and now today’s blog. It has its own idiosyncrasies, one being that anytime you pause for a moment or so to gather your thoughts, the microphone turns itself off. I never outline my books, I just make it up as I go along, so this may be a problem, I’m not sure yet. Yes, I make my books up as I go along. That’s why they’re called fiction. I have also noticed that it does everything except proper names in lowercase. That’s not a big issue, because I can select something I’ve written and use the change case option in the toolbar to turn it into sentence case.

From what I’m seeing so far, it seems to be just as good as the Dragon Naturally Speaking I have been using. Yes, it has typos and problems once in a while, but so does Dragon. If this works out I may start using it instead of Dragon except when I dictate into my Sony digital recorder. That is configured to import files to the Dragon Pad and then I have to cut and paste them into Word. I’ll let you know what I think of it after I’ve used it a while.

My SI joint injections went well yesterday and my comfort level is way up from what it was just the day before, or in the days leading up to it. The last time I had shots in the SI joints I had relief for close to 5 months. If I could get that much out of them this time around, I’d be a happy camper.

With the first round of editing and proofing of Big Lake Quarterback out of the way and in the hands of the second proofreader, now I will start working on the back cover blurb, which will also be on Amazon when someone goes to the book’s page. Then I will write the first chapter of the next Big Lake book to go into the back of this one as a teaser, kind of like a preview of coming attractions. And after that, I’ll get my author’s newsletter ready to send out. If you don’t already subscribe, send me an email at [email protected] and I will get you added to the list.

I’m a little concerned that people who are not into sports will be turned off by the book’s title. Let me assure you, this is not a book about sports. I myself am not into sports. This is just a straight small-town mystery. Well, as straight as any Big Lake book can be. If you know that quirky little mountain community, you know that there’s always something weird happening. The premise of the book is that the high school’s star quarterback disappears a week before the homecoming game. Probably the only person I know who is less into organized sports than myself is Miss Terry, and she said she loved it. Then again, she might be just a little bit prejudiced. Word is she’s sleeping with the author.

Since I mentioned that we will be going to Arizona in February for Terry’s father’s 90th birthday and a family reunion, I have received so many wonderful invites to stop and see someone along the way for a visit and invitations to spend the night. In fact, there have been so many of them that we would probably be on the road until next February if we took everybody up on them. Especially considering that some of those invitations came from places like Missouri, Iowa, Colorado, and South Carolina. If you were to look at a road map, you would notice that none of those locations are anywhere near our planned travel route along Interstate 10. And several of them are in places where it’s cold! Sorry, I appreciate your generosity, but that’s just not going to happen.

Speaking of cold, it was down into the upper 30s last night. I read every word of the purchase agreement on our home and the set of minimal rules homeowners are required to abide by in our little subdivision (no, we don’t have a Homeowners Association, thank God) and nowhere in any of them does it say anything about the temperatures ever being this low. I need to call my attorney at Dewey, Cheatum and Howe. Someone is going to answer for this!

And finally, here’s a chuckle to start your day from the collection of funny signs we see in our travels and that our readers share with us. I don’t know where this is, but I want to buy a house on this corner! 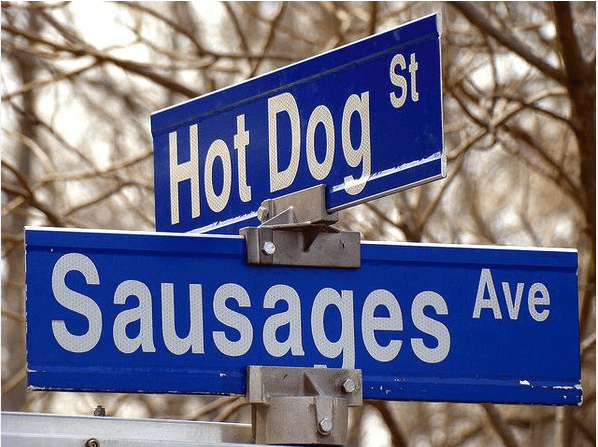 Thought For The Day – If you want to kill a big dream, tell it to small-minded people.