Nick's Blog » This Time We Really Did

As I wrote in yesterday’s blog, we had planned to stay home on Friday so I could get some writing done and Miss Terry could get back to her latest long-delayed weaving project. But then we ran out to do a couple of errands and the day got away from us. So we didn’t accomplish either of those goals. But yesterday we really did it.


As I usually do, I started the day by answering a bunch of emails about RVing and writing. While I would say that 90% of the emails I get are legitimate questions that any newbie might ask, I’m still amazed at some of the oddball questions I get from people. Here are three examples from yesterday’s mailbag:

“I’m writing a book about a police officer who is in an abandoned building looking for an escaped bank robber. The bad guy jumps on him and they get into a fight during which the officer loses his gun. The criminal has a large knife and attempts to stab the officer with it, but he manages to wrestle it away from him. The big bad guy grabs the cop’s gun, but before he can use it, I have the policeman stabbing him and killing him with his own knife. Would he get in trouble for this, since it’s not an issued weapon? Also, would he have to warn the criminal to drop the gun before he stabs him?” I replied that anybody who has ever been in a real fight to the death knows that you use whatever you can get your hands on to stay alive, and you don’t have time for niceties like warnings or worrying about what the brass will say afterward.

The second email was from someone who wants to try the fulltime RV lifestyle, but he doesn’t have an RV yet and has never even been inside of one. He wondered if there were people like snowbirds who only use their rig a few months out of the year that would be willing to loan it to him so he can get his feet wet. No, I don’t think it’s going to happen.

The third email was probably the best of all. A lady contacted me to tell me that she and her family have been evicted from a mobile home park that has half a dozen RV sites because her dog is aggressive, barks a lot, and lunged at a few people that walked past when it was tied up. She asked me what recourse she had against the owners of the mobile home park, and if I would be willing to take on her case on a contingency basis, getting paid when we collect. No, ma’am, I’ll have to pass because A: I’m not an attorney and B: you have no case. Maybe you should put your efforts into learning how to control your animal, not trying to figure out how to sue somebody.

With all of that out of the way, we had a nice brunch, and about the time we were finishing it my buddy Greg White called from Texas. I had just told Miss Terry that I thought Greg didn’t love me anymore since we usually talk every day or two and I had only heard from him once since he and Jan got back from their month-long European adventure. And I had to call him for that.

Greg swore he’s been busy playing catch up since they got home, both on his rest and all of the chores at work that that had piled up in his absence. Maybe that’s true, but the suspicious part of me thinks he’s found a new fat little author to hang out with and I’m yesterday’s news.

I settled down to writing after the phone call from Greg, first going over the last few chapters I had written and making any corrections I saw that needed to be taken care of. Then I cranked out just shy of 4,000 words by the end of the day.


While I was doing that, Miss Terry was busy weaving, and from what I’ve seen of her latest project, it’s going to be another beautiful one. But aren’t they all?

And just like the day before, it was very hot and we had another short, hard rainfall as a couple of storm cells came through the area. That will be the pattern for the next three or four months. What can you do? It’s Florida in the summertime. It looks like some businesses around here know how to make the best of a bad situation. 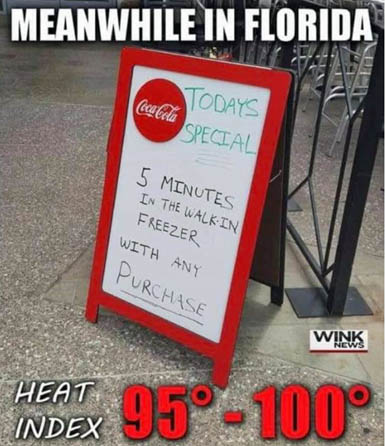 Today is your last chance to enter our latest Free Drawing. This week’s prize is an RV camping journal donated by Barbara House. Barbara makes several variations of these, and they all have pages where you can list the date, weather, where you traveled to and from that day, beginning and ending mileage, campground information including amenities at RV sites, a place for a campground rating, room to record activities, people met along the way, reminders of places to see and things to do the next time you’re in the area, and a page for notes for each day. To enter, click on this Free Drawing link or the tab at the top of this page and enter your name (first and last) in the comments section at the bottom of that page (not this one). Only one entry per person per drawing please, and you must enter with your real name. To prevent spam or multiple entries, the names of cartoon or movie characters are not allowed. The winner will be drawn this evening. 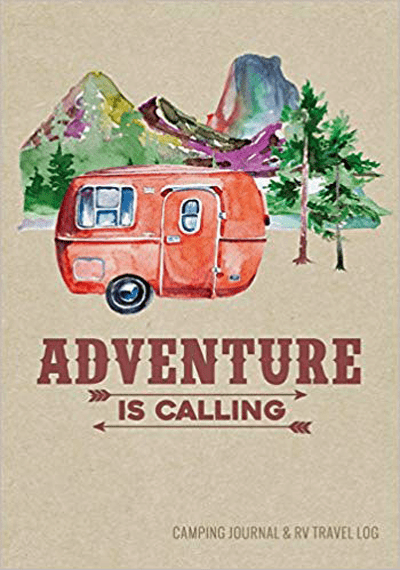 Thought For The Day – Are people born with a photographic memory, or is it something they develop?

3 Responses to “This Time We Really Did”