It had been way too long since we had seen my son Travis and his pretty wife Geli, so we decided a road trip was in order to remedy that situation. What the heck, any road trip anywhere is always fun, right?

On Thursday, the 6th, I had an appointment with the doctor in Deland, about 25 miles east of us, to get a couple more SI injections in my lower back. I had the same procedure done back in December and Dr. Kent said I could expect it to work from 4 to 6 months before he needed to repeat the shots, and he was right on the money. They made a significant difference for that time period, but I was beginning to feel a lot more pain again.


We left the doctor’s office and drove north to Palatka, then picked up State Road 100 and took it northwest to Lake City. It was a good two lane road and I wouldn’t have any hesitation to drive a large motorhome down it. At Lake City we picked up Interstate 75 and went north a few short miles to Interstate 10 and followed it west 165 miles, where we got off on US Highway 231. From there it was another half hour or so to Dothan, Alabama, where we got a room at the Hampton Inn for the night.

I like Dothan. It’s a friendly community that is big enough to have just about anything you could want or need, but still retains its small town feel. And the folks there go out of their way to help others in need. A couple of years ago when Hurricane Irma hit us and everybody fled north and inland to get out of the storm’s path, several RVers we knew were dry camping at Walmarts and places like that in Dothan. The police came by and told them to move to the nearby fairgrounds, where they were provided with free hookups, and local churches and civic groups fed everybody breakfast and dinner. All of it for no charge, just people helping people!

Dothan has some interesting claims to fame, including the self-imposed title of Peanut Capital of the World. Peanuts contribute a lot to the local economy, and the folks in Dothan honor them. I’ll have more about that in a future blog post. Besides peanuts, Dothan also is home to the World’s Smallest City Block, a triangle of land downtown that isn’t big enough to park a motorhome on, or even a small travel trailer. It contains a couple of street signs and a monument attesting to its uniqueness. I guess it’s true. I’ve been to a lot of places and I’ve never seen a city block smaller than that. And the Guinness Book of World Records backs up the city’s claim to fame. 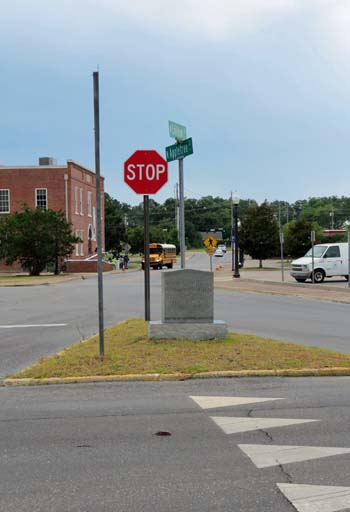 While the World’s Smallest City Block wasn’t all that impressive, what certainly was are the many murals painted on the sides of buildings downtown. One honors Sherman Rose, who was among the first African-Americans selected to receive pilot training as part of the government’s Civilian Pilot Training Program, which led directly to the formation of the Tuskegee Airmen of World War II fame. After completing his own training, Rose became a flight instructor for other Tuskegee pilots. Following the war, he became a flight instructor at nearby Fort Rucker, both for fixed wing aircraft and helicopters. Many Vietnam War helicopter pilots credited Rose with giving them the skills they needed to stay alive in combat. Other murals cover important events in the region’s history from settlement days and the Indian wars, to the turpentine industry. 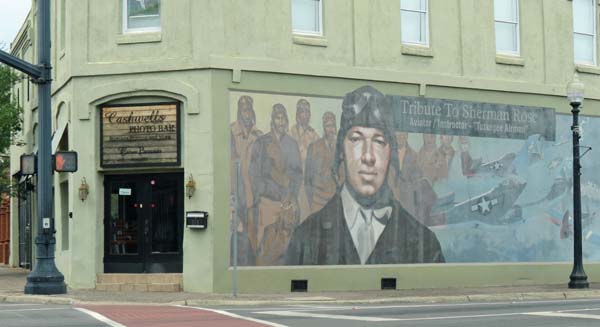 Before leaving Dothan the next morning we drove around town for a little bit and stopped at a couple of antique shops. Then we headed north on US Highway 231 toward Montgomery. It’s an excellent road, mostly divided four lane and suitable for any size RV.

Along the way, we ran into a very heavy rainstorm that had a lot of traffic getting into the right lane and slowing down to 30 miles an hour because of the lack of visibility. Of course, that didn’t stop fools from blowing past in the left lane at 65 miles an hour, including a couple of motorhomes and trucks towing fifth wheels. Where does an RVer have to get to in such a hurry that he would risk his life and the lives of everybody else on the highway to drive like that in those kind of conditions?


By the time we reached Montgomery the rain had stopped and we picked up State Highway 82 for the 95 mile run into Tuscaloosa. We’ve been up and down this road several times in our motorhome, and it’s a very hilly two lane road that carries a lot of traffic, including logging trucks. It is much more comfortable to drive it in our Chrysler Pacifica than a big RV. There isn’t much in the way of scenery along the way, a couple of convenience stores and some old abandoned houses and gas stations. The nostalgia value is great, and if you’re a photographer there are some outstanding opportunities to take pictures along the way. 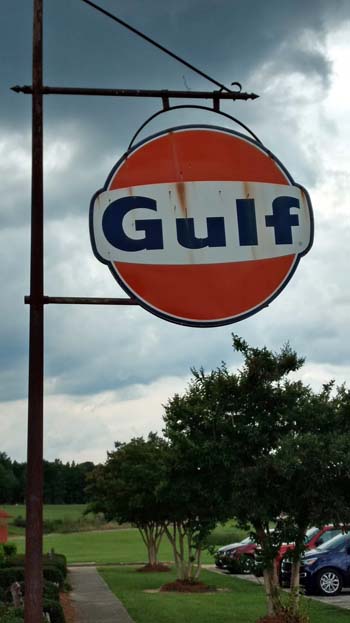 Thought For The Day – I flirted with disaster last night. Now disaster won’t stop texting me.

One Response to “Road Trip To Tuscaloosa”