I have received a number of emails and messages wanting to know when my new John Lee Quarrels book, Sweet Tea And Jesus, will be out. It’s with the final proofreader and I expect to get back from her at any time. As soon as she does, I will make any final corrections she pointed out and get it uploaded to Amazon. It should only be a day or two at the very most. As soon as it is available I will be blasting announcements about it here on the blog, on Facebook, and in my author’s newsletter.


By the way, if you would like a free subscription to the newsletter, with information about my books and writing activities, and the things some of my author friends are doing, just send me your email and I’ll get you added. And don’t worry, I won’t spam you or share your information with anybody else.

You can tell that spring has sprung and summer is on the way to the Central Florida coast. It was 90° here yesterday, and we got a lot of rain, thunder, and lightning. And it looks like more of the same today.

Terry had a doctor’s appointment yesterday morning, and Beverly had another one in the afternoon. But between them I managed to spend some time doing genealogical research and found some interesting stuff. My dad and his father were estranged, so I don’t know much about the Russell side of the family. My research yesterday turned up a cousin, Duane Elliott Russell, who joined the Army during World War II as an enlisted man, rising to the rank of Master Sergeant and transferring to the newly formed Air Force. From there he became an officer, rising to the rank of full colonel before he retired in 1974. By then he had served in not only World War II, but also Korea and Vietnam, earning several decorations and awards, including the Legion of Merit, Bronze Star with V for valor in Vietnam, several air medals, two presidential citations, four Air Force outstanding awards, the Vietnamese Cross of Gallantry with palm, and others. His name is inscribed on the National Aviation and Space Exploration Wall of Honor at the National Air and Space Museum in Washington, D.C. I never had the opportunity to meet Duane, who died in 2015 at the age of 92, but I think he’s the kind of man I would have liked to know.

I really enjoy poking around on Ancestry.com and find it fascinating to discover stories from long ago. The only problem is, I get so involved in it that I lose track of time and before I know it three or four hours have gone by. It really cuts into the production of new books. But don’t worry, I’ll be starting on my next Big Lake book shortly.


And finally, I have been meaning to post this photograph of Surterra Wellness, the medical marijuana dispensary in nearby Port Orange. And yes, that really is a Dunkin’ Donuts right next. How cool is that? You can get glazed and dazed in one stop. Talk about a time saver! 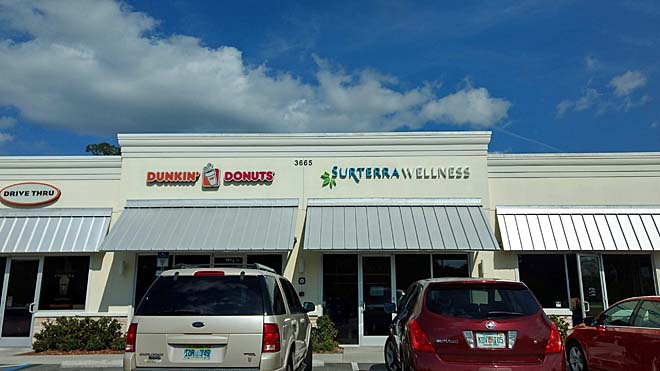 3 Responses to “Soon, I Promise”