Note: This story is from my book Highway History And Back Road Mystery. 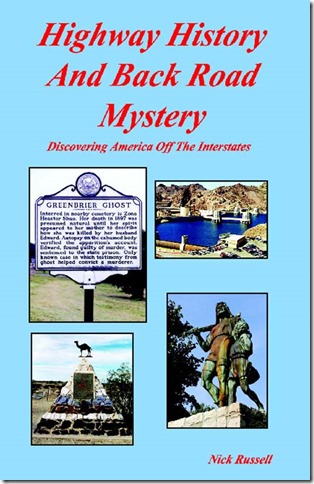 Washington state’s Olympic Peninsula is wild country, with thousands of square miles of dense rainforest, broken here and there by deep rivers and steep hills to the south, giving way to towering mountains in the north. Even today, in this age of high speed transportation and satellite communications, the Olympic Peninsula forces man to slow down and live at her pace.


Nearly 100 years ago the forests of the Peninsula were even wilder, and the men and women who lived in these forbidding woods had to be a match for the unforgiving land they inhabited. It was uncivilized territory in many ways, where people had to rely on their own means to survive, and often those means were cruel.

In this untamed land, filled with rough, hard working men, one man’s name stood out from all the others. A name that could strike fear into the hearts of the boldest loggers and trappers. That man was John Tornow.

Popular belief has it that John Tornow was a deranged killer, a wild man who roamed the Wynoochee River country, preying on loggers and timber cruisers, murdering them for their clothing and what meager property they might be carrying with them. For nearly two years armed posses launched futile searches for Tornow, always one step behind the fugitive. The dramatic end to the chase came on April 16, 1913, when Tornow was cornered and killed in a shootout at his camp, deep in the woods. But was John Tornow really the monster popular history has labeled him? Or was he simply a tragic figure, caught up in circumstances he could not control and reacting in the only way he knew?

Over the years, many stories have been told about Tornow. As with most legends, the fiction outweighs the facts, as each storyteller embellished the tale and it was passed from campfire to logging camp to barroom. But the true facts have never fully come to light. The mysterious story of John Tornow is one whose whole truth will probably never be known.

What is known is that Tornow was born September 4, 1880. His German immigrant parents settled on the Olympic Peninsula at Matlock, west of Shelton, and carved a homestead out of the forest. Life on the frontier was harsh under the best of circumstances, and the humble Tornow holdings were modest. John Tornow wasn’t cut out for life as a farmer, and was happiest roaming the forests alone. An excellent shot, his hunting prowess kept the family table in game to supplement the meager diet the farm offered at times.

Apparently Tornow was considered a bit of an oddball by some people in the small community, and he was committed to an insane asylum in Olympia at one time. Was this due to any aberration on his part? Perhaps not. Some believe the commitment was a move to declare Tornow unfit to claim his inheritance after the deaths of his parents, possibly instigated by his brother-in-law, Henry Bauer. To Tornow, life in the asylum was life in prison, and he promptly ran away, back to the security of his woods.

The next act in the grim story happened in September, 1911, and again, more fiction surrounds the incident than fact. Tornow’s twin nephews, nineteen year old William and John Bauer, were hunting a bear when they were murdered. Some say their killing may have been related to a cow owned by their parents, Henry and Minnie Bauer. One story has it that John Tornow butchered the cow for meat, and that he murdered the boys to cover up the crime. Others believe that the recluse didn’t recognize the youths, seeing only men with guns, and thinking they were a posse come to take him back to the asylum, he ambushed them. The truth is, no one saw Tornow shoot his nephews, and the only evidence linking him to the crime was the discovery of his campsite in the vicinity of the murders.

Whatever happened that terrible day, it was the beginning of the Tornow legend. Perhaps guilty, perhaps innocent but realizing he would be accused of the crime, Tornow fled deeper into the forest. Living off the land, he managed to elude lawmen for nineteen months. As the story circulated around the mining camps and settlements on the lower half of the Olympic Peninsula, John Tornow took on mythical proportions.

In the telling, he became a frightening specter, living high in the treetops, swooping down to murder unwary loggers, stripping their bodies of their clothing and supplies before disappearing into the green mists of the forest. The fact that no bodies of murdered loggers were ever found, and that no one actually saw Tornow committing any crime, didn’t matter. Never let the truth get in the way of a good tale.


Yes, men did disappear from time to time in the wild land. It’s probable that most of them simply went elsewhere in search of whatever lures men to such untamed territory. Perhaps some did perish in the wilderness. But did they fall victim to a homicidal maniac, or, as is more likely, did they meet up with wild animals or accidents that were all too common in such a rough environment? It didn’t matter. John Tornow became the Wild Man of the Wynoochee, and his fate was cast.

Some said Tornow lived on an island in the middle of a small lake, deep in the heart of the forest. They claimed he eluded capture by tethering frogs with string to nearby logs, and when lawmen approached, the frogs’ sudden silence served as an alarm system. No one thought to reason that frogs were a natural part of the environment and didn’t need to tethered. Or that an experienced woodsman would naturally be attuned to the sounds of the forest and rely on them to warn him of impending danger. Again, the fiction outweighs the facts by a large margin.

On a Spring day in 1913, the searchers finally caught up with the fugitive, and in a wild gun battle, one posse member and John Tornow were killed. The outlaw’s body was carried out of the woods and propped up on a board for display, as was the custom in those days. They still display photos of the dead fugitive today in some saloons and stores on the Olympic Peninsula, a grim reminder of the country’s frontier past.

Did John Tornow kill his nephews, precipitating the manhunt? There is reason to believe not. Tornow loved his sister, Minnie, and doted on her twin boys. There may have been others who had reason to commit the crime. Their father, Henry Bauer, disappeared from the area shortly after the murders, never to be seen again. Some speculate that he may have been the true killer, and that John Tornow was framed, either to cover up the killer’s identity or to cheat him out of his share of the family homestead.

Yes, Tornow killed a lawman when they closed in on his camp, but was this the act of an outlaw, or the desperate reaction of a disturbed soul fearing a return to a confinement it could not survive? Was John Tornow a cold blooded killer, or simply an outcast caught up in a terrible tragedy he did not create and could only react to? No one will ever know. All of the principals are dead now, and the mystery remains.

John Tornow is buried in the tiny Grove Cemetery, near Matlock. Nearby are the graves of his nephews, William and John Bauer, and their sister Mary, as well as Tornow’s parents. John Tornow’s headstone depicts his nephews on their bear hunt and describes Tornow as follows: “From Loner – To Outcast – To Fugitve.” Perhaps one final insult to an unfortunate life is that the word fugitive is misspelled on the headstone. Or perhaps John Tornow wouldn’t care – he’s finally at peace in his beloved wilderness. 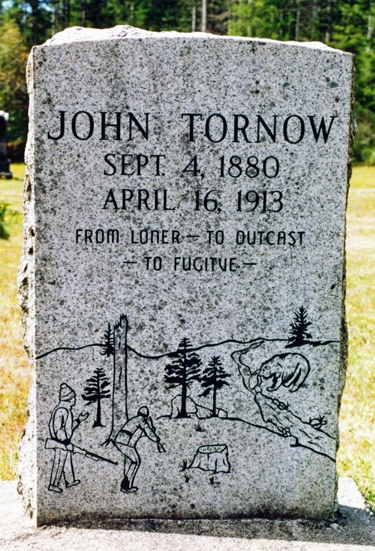 Thought For The Day – Things end, people change, but life goes on.

One Response to “Wild Man of the Wynoochee”