Nick's Blog » On The Trail Of Billy The Kid

Note: This story was a reprint of a past blog post requested by RVers who will soon be headed east after wintering in Arizona.

Hollywood and pulp fiction have glorified and made him out to be a hero, but in truth Billy the Kid was a ruthless runt who killed not only for money, but just for the thrill of killing. More then one unlucky cowboy met his fate when the outlaw took offense over some imagined or unintended slight.


There is at least as much myth as fact in the legends about Billy the Kid, and much of the truth about his life has probably been lost in the dusty pages of history. Henry McCarty was born not in the West, where he gained his dubious fame, but in New York City, in 1859. When he was a child the family migrated to Kansas, where his father died. Later Billy and his mother moved to New Mexico, where she married William Antrim in Santa Fe on March 1, 1873. Soon after, they moved to Silver City, New Mexico. Billy’s mother died of tuberculosis in Silver City on September 16, 1874, when he was 14 years old.

By the time he was 15, Billy was already on his way to a life of crime. He was arrested for stealing a bundle of laundry, and promptly escaped from the Silver City jail and fled town. Some legends claim that Billy killed his first man when he was 14, when he insulted Billy’s mother. However the first recorded victim of the Kid’s bloodlust was a blacksmith named Cahill, whom Billy killed two years after his mother’s death.

Billy used several aliases during his career, including William H. Bonney, and his stepfather’s name, William Antrim. Billy was a hired gun in the Lincoln County War, where his reputation with a six shooter was built. He was a known as a hot tempered bully, but he had his supporters, and many people around Fort Sumner, New Mexico considered him a friend.

Fort Sumner started as an Army post in 1862, and after the military left in 1868, the town moved a few miles north. Fort Sumner was a favorite haunt for Billy and his gang of outlaws and killers, and it was here that Billy was killed by Lincoln County Sheriff Pat Garrett on the night of July 14, 1881, at the home of Pete Maxwell. Billy the Kid was buried in the old Fort Sumner Cemetery, located a couple of miles from town, in a grave with two of his outlaw pals, Tom O’Folliard and Charlie Bowdre, and forever since, Fort Sumner has been tied closely to the outlaw’s legend. 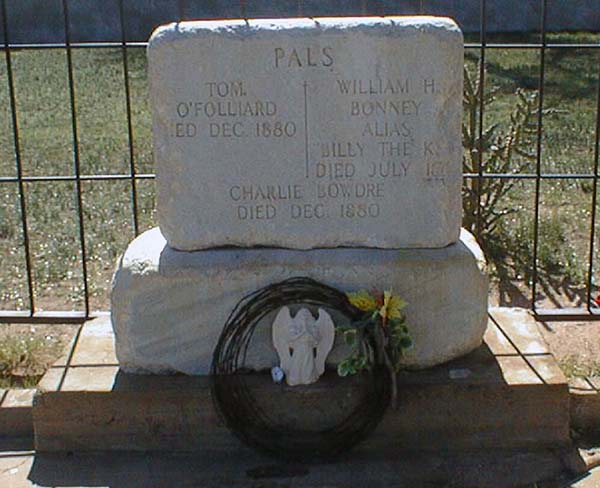 Billy’s tombstone was stolen in 1950, and its location remained a mystery for 26 years until it was recovered in Granbury, Texas. Thieves struck again on February, 8, 1981, when the tombstone was again stolen, and later recovered in Huntington Beach, California. De Baca County Sheriff “Big John” McBride flew to Los Angeles and recovered the headstone and returned it once again to Fort Sumner. This time the elusive tombstone was set in concrete and iron shackles, and a steel cage was erected around the grave to discourage souvenir hunters. 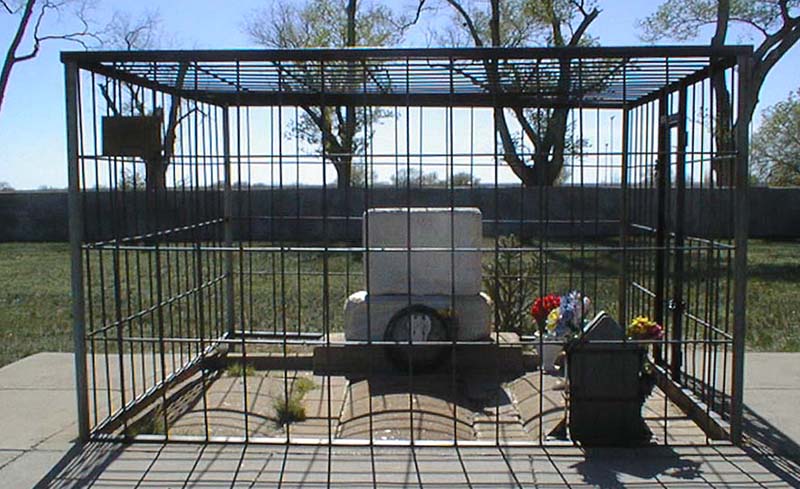 Today Fort Sumner is a small community that earns its living off local ranchers and tourists who are drawn by the legend of Billy the Kid. A statue of the outlaw stands on the main highway through town, and two private museums contain displays about Billy the Kid.

Ed Sweet, a congenial horse trader who made his living going from house to house peddling apples, sweet potatoes, homemade brooms, and mattresses, was a lifelong collector of anything old. As he made his rounds, Ed was always on the lookout for something he could swap for his goods, and with money tight, many an old timer was more than happy to barter worthless “junk” for whatever Ed was selling. Over time, Ed assembled a huge collection of Old West artifacts and antiques, and in January, 1953, he opened the Billy the Kid Museum in Fort Sumner.

The museum started in a one room building, and over the years Ed and his wife Jewel continued to add new items and expand. Ed passed away in 1974, at the age of 70, but the museum that grew out of his collection continues to serve as his legacy. 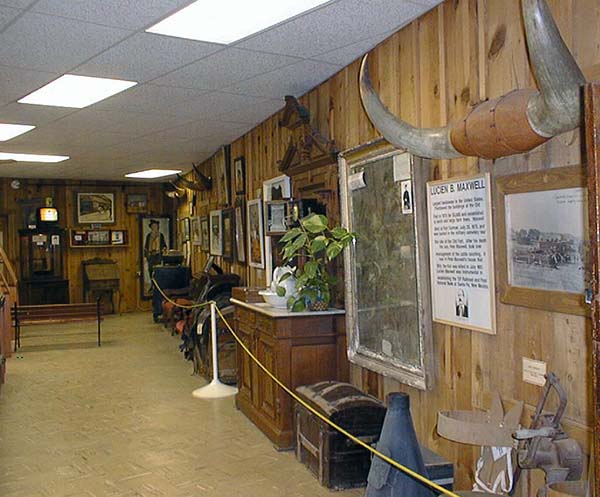 One favorite exhibit is a .44 Winchester rifle owned by the outlaw, along with documentation of its authenticity. Other Billy the Kid items on display include the door from the Maxwell home that the outlaw came through the night he was shot, and two curtains from the bedroom in which he was killed. Billy was reportedly a good dancer and singer, and the museum has the chaps and spurs he liked to wear to dances around Fort Sumner. 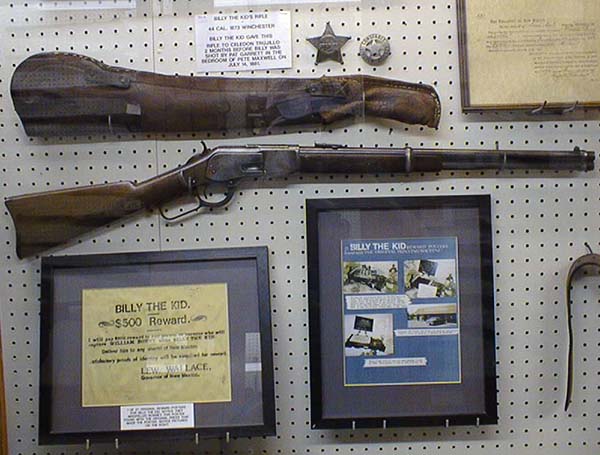 Along with Billy the Kid exhibits, the museum has a huge collection of artifacts from the Old West and Fort Sumner, including cannon balls, guns, furniture, documents, saddles, a horse-drawn frontier hearse, wagons, and a wonderful collection of antique cars. 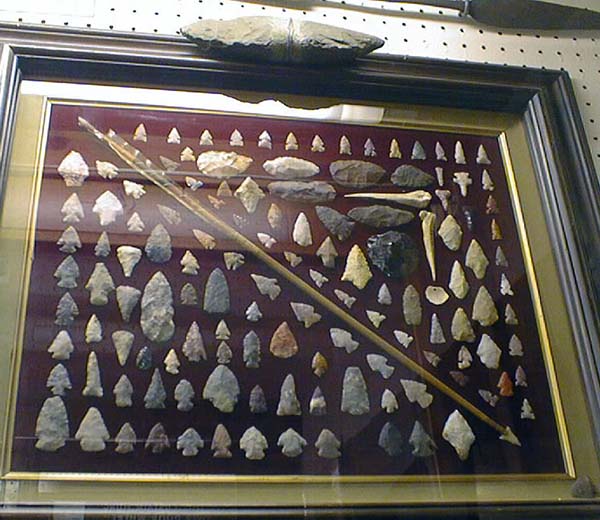 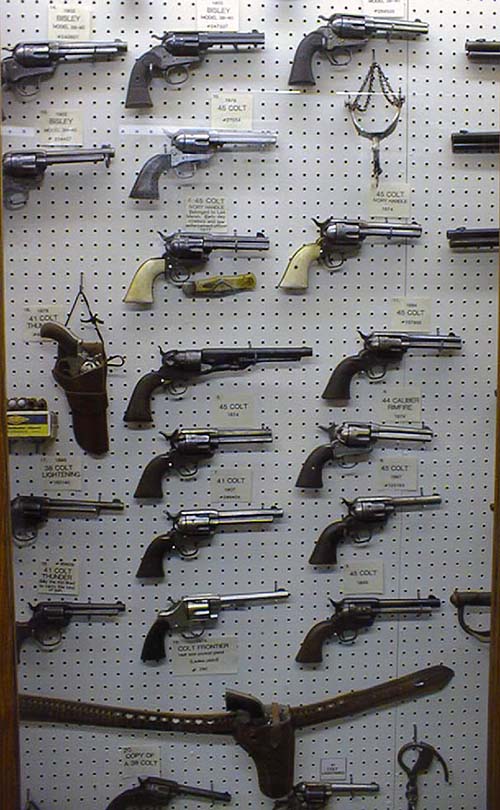 The museum also has a nice gift shop. There is plenty of parking at the museum, and the Sweets also operate the nearby Valley View RV Park, a small but comfortable park large enough to handle any size rig. The museum is open daily, and admission is $5, with discounts for children and senior citizens.

A half mile or so west of the museum and cemetery is the Fort Sumner State Historical Monument, where you can tour the old fort’s grounds and learn about the reservation where Navajo and Apache Indians were interred under horrible conditions for resisting encroachment onto their lands. The monument charges a small admission fee. Parking was rather limited for large RVs during our visit.


He was not the dashing figure he has been portrayed as, but eastern New Mexico is as steeped in Billy the Kid’s legend as its sand was soaked by the blood of the outlaw and his victims. A visit to Fort Sumner is an interesting stop if you want to learn more about the outlaw and his times. Fort Sumner is located on US Highway 60 in eastern New Mexico. The Billy the Kid Museum is on the highway about two miles east of downtown. The Old Fort Sumner Museum, grave site, and Fort Sumner State Historical Monument are about five miles further southeast on a well marked road.

Congratulations Garry Foster, winner of our drawing for an audiobook of Chesapeake 1880 by my friend Ken Rossignol, a tale of life in the Chesapeake Bay region as the industrial revolution changed the world forever. We had 58 entries this time around. Stay tuned. A new contest starts soon.

Thought For The Day – If you’re paying $3 for a bottle of smart water, it isn’t working.

One Response to “On The Trail Of Billy The Kid”