Note: This story is from my book Overlooked Arizona.

Do you believe in ghosts? Do you think it is possible that the spirits of those long departed from this world can return? Are tales of ghosts and hauntings merely the product of overactive imaginations? Ask some of the rangers at Arizona’s Yuma Territorial Prison State Historic Park, and you might learn that more than a few believe in ghosts. They have seen first-hand evidence!


The first seven inmates entered the Yuma Territorial Prison on July 1, 1876. Prison labor was used to build the cells they would live out their sentences in. Though the prison had a reputation as a “hell hole” it was actually very progressive for its time. Prisoners had good medical care, a school was available, where many learned to read and write, and the prison had one of the first public libraries in Arizona Territory. In its latter days it had one of the first electric generating plants in the West supplying power to the prison, and the excess electricity was sold to the city of Yuma. 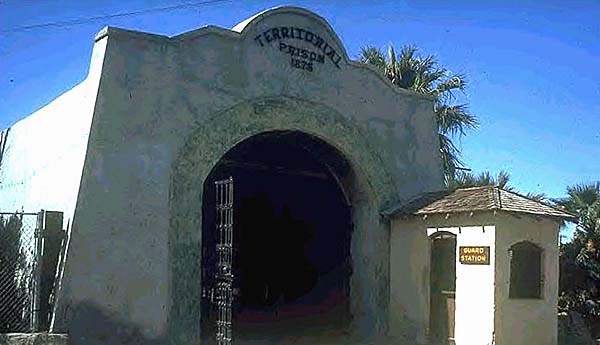 In their free time convicts made hand-crafted items, which were sold at public bazaars held at the prison on Sundays after church services. Prisoners were treated humanely, with punishments ranging from incarceration in a “dark cell” for infringement of prison rules, to having to wear a ball and chain for escape attempts. No executions ever took place at the prison, since in those days capital punishment was administered by county governments. Most prisoners did not serve out their entire sentences, since paroles and pardons were fairly easy to obtain.

Still, this was a prison, and many desperate men (and women) passed through its barred doors. A total of 3,069 prisoners, including 29 women, were incarcerated in the prison during its 33 years of operation. Their crimes included everything from murder and bank robbery to polygamy. Grand larceny was the most common conviction that brought inmates to Yuma. 111 prisoners died at the prison, most of those deaths caused by tuberculosis, a commonplace disease in Territorial days. Several others died from accidents, and eight were shot in escape attempts. Of the many prisoners who tried to escape over the years, only 26 were successful. While conditions were good for their times, they would be considered harsh by modern standards. Cellblocks were unheated, had no central cooling or plumbing, and prisoners slept on narrow wooden bunks with iron frames and straw filled mattresses alive with bedbugs. 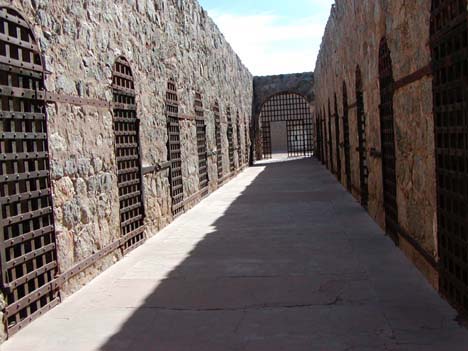 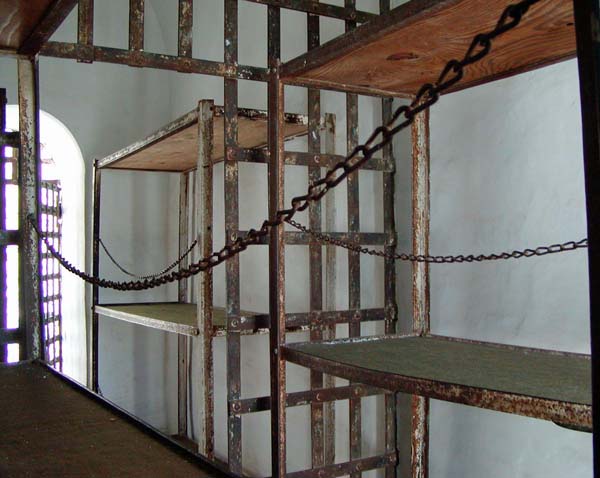 One bold escape plan ended in a bloody battle when seven prisoners seized the prison’s Warden Gates and several firearms and tried to use him as a human shield to get past the guards. The hard bitten Gates would have none of this, and as they neared the sallyport (below) leading outside of the prison, he ordered a tower guard to fire on the convicts and not to worry about hitting him. As rifle fire mowed down the prisoners, one viciously thrust a knife into the warden’s back several times. Seeing the savage attack, a convict serving on trustee status grabbed a handgun from the warden’s desk and shot the knife wielder dead. When the smoke had cleared, four of the fleeing convicts were dead and another wounded. Warden Gates survived the brutal attack, and the trustee who rescued him was paroled for his heroic actions. 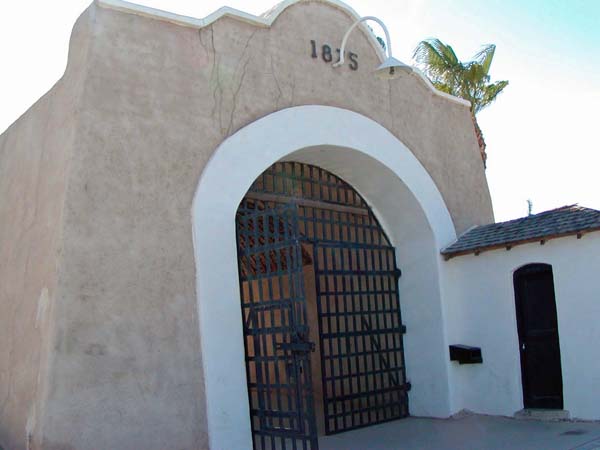 A form of solitary confinement, the prison’s “dark cell” was notorious. A narrow stone cell with a solid door and bare stone walls and floor, the only light and ventilation into the dark cell was a tiny opening high in the ceiling. There are stories that sometimes guards would get even with a particularly troublesome inmate by dropping a rattlesnake down through this opening to share his tiny space.

One of the prison’s most celebrated guests was Pearl Heart, the girl bandit. An attractive young woman, Pearl was sent to the prison for holding up the Globe, Arizona stagecoach with a male partner. There are rumors that Pearl was released after she became pregnant in prison, a scandal no one wanted to acknowledge. She disappeared after she regained her freedom, and it is believed she later married a rancher in central Arizona and settled into a peaceful life. 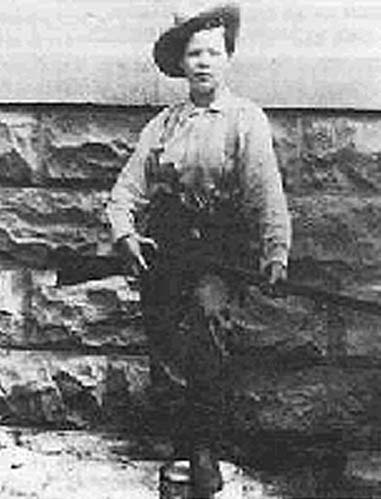 By 1907 the prison was terribly overcrowded and there was no room for expansion. Over the next two years the convicts were transferred to a new facility in Florence, Arizona, making the 200 mile trek on foot. The last prisoners left the prison in 1909.

From 1910 to 1914 the prison housed the Yuma High School, and later the old cells provided lodging for hobos riding the rails through town. During the Great Depression, homeless families lived in the former prison. Over time the prison fell into disrepair, and locals carried off many of the blocks from its walls for local building projects. Fires, weather, and the construction of the railroad further eroded the original prison site.


Today the prison has been preserved as an Arizona State Historic Park, and the cells, main gate, and guard tower still stand to welcome visitors. But some claim that ghosts from the past are still there to greet tourists as well. 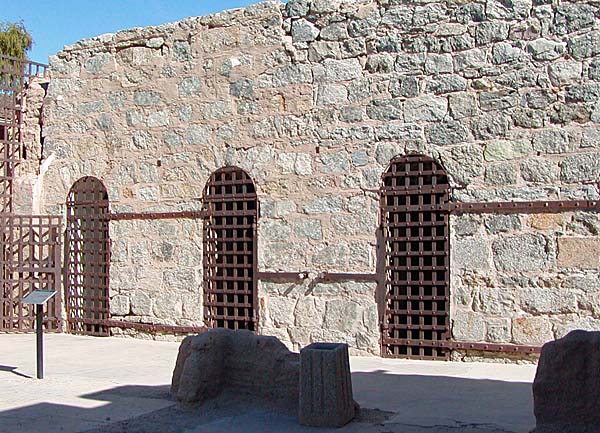 Over the years there have been many tales of ghostly sightings and eerie happenings at the old prison. One Yuma girl who attended high school classes at the old prison after the inmates were transferred to Florence claimed that a young man sat down beside her as she enjoyed her lunch outside one day, then disappeared when a classmate approached. A teacher reportedly refused to be on the grounds after dark after a mysterious experience he would not discuss.

Author Antonio Garcez, who wrote a story about Yuma Territorial Prison for the website Ghosts of the Prairie, along with authoring a book on Arizona ghost stories, collected a number of stories of bizarre incidents at the prison from park rangers and visitors. Many of the stories revolve around the dark cell used for punishment.

One ranger at the park reported that she sensed a presence in a cell that frightened her, and also told of a photograph taken of a woman tourist during the 1930s that revealed the ghostly image of a man standing in the cell door behind her. That particular cell had been used to hold insane prisoners until they could be transferred to another facility.

While there is no record of any prisoner dying while in the dark cell, over the years two prisoners were taken from the cell directly to an insane asylum in Phoenix. There is also the story of a woman who was writing a magazine article on the prison and asked to be locked in the dark cell overnight to experience what prisoners endured there. Before long the writer was screaming to be released, claiming that there was someone else in the cell with her. Park rangers who came to her aid could find no one else in the tiny cell.

The prison also includes a very nice small museum, with displays of equipment used at the prison, photographs of convicts and guards, and other artifacts from Territorial days. The museum staff has reported that often things will be moved mysteriously from where they were left, lights turn on and off for no apparent reason, and reportedly on one occasion coins from the cash register in the museum gift shop flew into the air, then settled back in the drawer!

Is there any truth to these tales of otherworldly incidents? Do the spirits of men who served time at the old prison remain trapped within its walls? Or are these events that can be explained rationally? Why not visit Yuma Territorial Prison State Historic Park and draw your own conclusions?

Yuma Territorial Prison State Historic Park is located just off Interstate 8 in Yuma, Arizona, at the Fourth Avenue exit. The exit is clearly marked. From October 1 to May 31 the park is open daily from 9 AM – 5 PM except for Thanksgiving and Christmas Day. June 1 to September 30 the park is from 9 AM 5 PM Thursday through Monday, and closed Tuesdays and Wednesdays. It will also be closed September 4 – 19, 2019 for major maintenance and repairs,

The Visitor Center, located in the museum, has drinking water and modern, handicapped-accessible restrooms. Visitor Center hours are 8 a.m. to 5 p.m. Admission is $8 for adults, $6 for seniors age 62 and over, $4 Children age 7 to 13, and children age 6 and under are free. Free parking for RVs and tow vehicles is available in the large South Parking lot. For more information, visit the park’s website at http://www.yumaprison.org/index.html

Thought For The Day – Did you ever think that maybe broccoli doesn’t like you either?