On a lonely windswept hilltop a couple of miles east of Superior, Arizona, we came across the grave of one of the Old West’s more tragic figures, a scorned woman named Mattie Blaylock Earp. 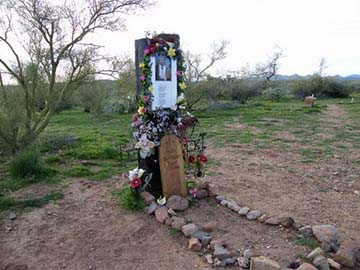 Born Celia Ann Blaylock in Wisconsin in 1850, and raised on a farm in Iowa, accounts of the day describe Mattie as having “large bones and a fine face.” Farm life was apparently too boring for her, and some suspect she worked as a prostitute in Scott City, Kansas, and later in Dodge City. Mattie worked as a dance hall girl in Dodge City, among the wildest towns known to man. It was here that she met Wyatt Earp, one of the most romanticized figures in history.


Wyatt Earp was born in Monmouth, Illinois in 1848, and when he was twenty years old he moved to Lamar, Missouri where he met and married Urilla Sutherland, who died of typhoid soon after their marriage. Hollywood and popular fiction have painted Wyatt Earp as a straight shooting lawman who helped tame the Wild West, his heroic deeds culminating in the famous shootout at the OK Corral in Tombstone, Arizona. He did indeed serve as an Assistant Marshall in Dodge City, where he earned his reputation as being quick with a six gun, and later was deputized by his brother Virgil, who was the Marshall of Tombstone, to give Wyatt some legitimacy in the upcoming confrontation with the Clantons, a faction the Earp brothers had a longstanding feud with.

What many overlook is the fact that for most of his life, Wyatt Earp supported himself as a petty criminal, bartender, gambler, and pimp. In 1871, the U.S. Court of the Western District of Arkansas at Fort Smith charged Earp with stealing horses on Indian lands. In 1874, court records report that Wyatt and his brother James operated a house of prostitution in Wichita, Kansas. Both were engaged in the same activity later in Dodge City, Tombstone, and Nome, Alaska.

Nobody knows for sure if Mattie was a prostitute when she and Wyatt first met, but given his known involvement in the shady side of commerce, there is no doubt that like most of the women associated with the Earp brothers, she worked off and on as a prostitute during their early years together.

In 1879, Wyatt and Mattie arrived in Tombstone, where Wyatt’s brothers and their wives had settled. Wyatt’s found work as a shotgun guard for Wells Fargo, and supplemented his income by gambling and more than likely, pimping. Mattie and Wyatt are not believed to have ever been officially married, but by 1879 everyone accepted Mattie as Wyatt’s common law wife.

Mattie suffered from severe migraine headaches, and while in Tombstone she became addicted to laudanum, a commonly used pain killer of the day. About the same time, Wyatt began an affair with Josephine Marcus, whom he would later marry. Mattie had at least two heated public altercations with the interloper.

Soon after the gunfight at the OK Corral on October 26, 1881, Wyatt and Josephine left Tombstone, never to return. Demonstrating his ability to be a complete cad, Wyatt never even said goodbye to Mattie, who had shared his bed and life for years.

Deserted by the man she loved, brokenhearted, addicted to laudanum, and penniless, Mattie tried to make it on her own but there was little she knew how to do. Soon she was working as a prostitute again and she began a downhill slide. Mattie was older now and lacked the appeal of the younger girls. She moved to Colton, California for a time, then relocated to Globe, Arizona, where she was charged with prostitution. From Globe, Mattie drifted a few miles west to the small mining town of Pinal, near present day Superior, Arizona. It was here that Mattie would die of an overdose of laudanum, on July 3, 1888. Her death was ruled suicide. At the coroner’s inquest, a witness reported that Mattie had told him that Wyatt Earp had “wrecked” her life by deserting her and she didn’t want to live.

Mattie was buried in the small Pinal Cemetery, and within months the boomtown had gone bust, and soon faded back into the desert. Mattie’s grave was first marked with a headstone, but the stone was stolen by vandals. To protect the grave from further desecration, a railroad tie headstone was placed “near” the original grave honoring Mattie Earp, but the railroad tie does not mark the actual location, which is nearby but lost to time.


Mattie’s grave is located off U.S. Highway 60, west of Superior, Arizona. Turn north on Silver King Mine Road, which is about 1/10 mile west of milepost #225. The road is an unimproved dirt road but is suitable for a passenger car in dry weather. Follow the road past Harborlite Corporation and over a railroad track. At a Y in the road about .6 mile from Highway 60, stay to the left, and about 1.1 miles from Highway 60, watch for a Qwest Fiber Optic Cable metal post on the right side of the road. Continue about 90 feet and turn left. At a Y another 90 to 100 feet, stay to the right, and at yet another Y .5 mile from the Qwest post, at a wash area, stay left. The small cemetery and a scattering of headstones will be on your right. GPS coordinates for Mattie Earp’s grave are N33 17.298, W 111 08.070. The next time you’re in the area, stop and pay your respects to this tragic figure from the Old West.

Thought For The Day – Sometimes not getting what you want can be a blessing.

7 Responses to “The Sad End Of Mattie Earp”