Between dealing with doctor and chiropractor appointments, a storm that knocked our Internet and cable TV out for hours, and dealing with the everyday chores of life, it’s been a little crazy around here lately. So I thought I would use today’s blog to play catch-up.


Miss Terry has been plagued with terrible  IBS for years now and every year it seems to get worse. A colonoscopy on Tuesday revealed damage from the intense radiation she received for her cancer. Her gastroenterologist has been trying everything he can think of to get her some relief and one option is to send her to the Mayo Clinic in Jacksonville. It may still come to that.

In the meantime, after much trial and error with meds and antibiotics that didn’t work, he has put her on Viberzi, which has helped quite a bit. The only problem with that is that a one month prescription cost over $1400. With insurance and several discount prescription programs, coupled with our AARP medical supplement, we have gotten that down to $677. That is still a lot of money, but it’s worth every penny if it helps her. Today they are trying something new. They are putting her in a hyperbaric chamber for up to two hours. Apparently pure oxygen helps rejuvenate radiation damaged tissue, among other things. We are keeping our fingers crossed that we will see some good results. Here is a link to information about oxygen therapy https://www.mayoclinic.org/tests-procedures/hyperbaric-oxygen-therapy/about/pac-20394380.

I know that Terry doesn’t want anybody to feel sorry for her. When she was diagnosed with cancer, the first doctor gave her about six weeks to live. That was eighteen years ago. So every day is a gift, and she says she would rather be alive dealing with some pesky issues than not to be here at all. I’m glad she is here, too.

In other news, my two new box sets of the first three books in the Big Lake series and the first three in the John Lee Quarrels series, are doing well. Especially in Kindle Unlimited, where you can read all the books you want for free with a low-cost monthly subscription. They are turning a lot of new readers on to my work. And Big Lake Wedding, my most recent release, is getting a lot of great five-star reviews. That makes me happy because there’s nothing like good reviews to help readers decide on a new book or a new author they have not read before.

After reading my blog post titled You Can’t Be Too Careful a couple of days ago, someone wrote to tell me that he has also had people tailgate him like that, but instead of speeding up or moving over to let them pass, he slows down and sticks his pistol out the window to let them know they’re messing with the wrong person. That’s about the dumbest advice I’ve ever received. What if the person behind you is a police officer in an unmarked car? What if it’s somebody filled with road rage who has his own gun? I wrote back and told the gentleman that the best thing he could do is take his pistol to the nearest pawn shop or gun dealer and sell it. While I am a strong believer that every law-abiding American citizen has the right to own a firearm, I have always said that even so, there are a hell of a lot of people who have no business with one.


Another reader, responding to the same blog, asked how it was legal for me to collect police badges. He said he thought only police officers could possess a badge. No, that’s not true. Obsolete badges can be owned by collectors as long as they do not try to pass themselves off as legitimate law enforcement officer. And I don’t just collect police badges. I have quite an assortment of taxicab and chauffeur licenses from the 1920s and 1930s, and some other oddball stuff that has caught my eye along the way. Pretty soon I’m going to be setting up a couple more display cases for them, to go with the ones I already have.

And in closing, here’s a chuckle to start your day, from the collection of funny signs we see in our travels and that our readers share with us. 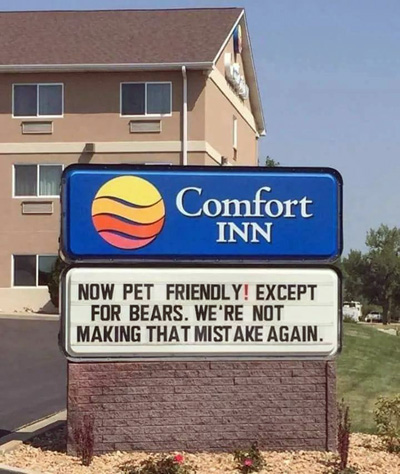 4 Responses to “Catching Up”