While the beautiful Oregon coast is one of our favorite travel destinations and we never get tired of it, there is a lot to see and do away from the beach, too. A while back we discovered historic Oakland, a charming little town that has worked hard to preserve its heritage.


Though it is located just two miles off busy Interstate 5, Oakland, nestled amidst rolling hills and thick forests, almost seems lost in time. There isn’t a traffic light in town, and you’re not going to find a Wendy’s or Taco Bell here, but the more than 80 carefully preserved buildings constructed between 1852 and 1890 house many interesting little shops and restaurants.

Oakland was established in 1851 by Dr. Dorsey Baker, a physician who passed through the Umpqua Valley on his way south to California during the Gold Rush. Failing to strike it rich in the goldfields, he returned in 1851 and filed a claim to 640 acres on the bank of Calopooya Creek, a mile north of present-day Oakland. Dorsey set up a medical practice and built a flour mill and a general store. For several years he delivered goods from his mill and store to small settlements and logging camps scattered across southern Oregon with a team of pack mules.

When the Oregon & California Railroad established a depot in 1872, Alonzo Brown laid out lots and the town was moved to its present site. Oakland became a prosperous place with hotels, general merchandise stores, doctors and dentists, drug stores, blacksmith shops and all of the other trappings of a busy frontier town.

In 1892 a disastrous fire destroyed nearly all of the wood buildings on Locust Street, where most of Oakland’s businesses were located. Although town founder Alonzo Brown lost nearly everything, he refused to be defeated. While the embers were still burning, he rode to the brickyard in Whitmore Gap and contracted for bricks to start rebuilding. Other businessmen followed his example and the results are the handsome brick buildings that now line both sides of Locust Street. 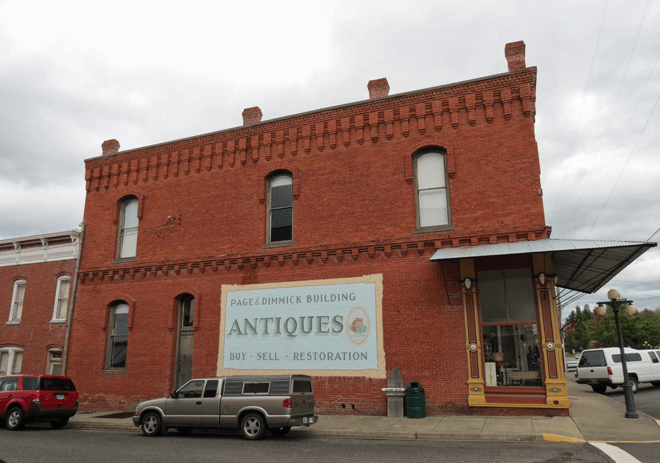 Despite the setback, Oakland continued to thrive and became an important poultry-raising center in the 1920s. Turkeys from Oakland graced the holidays tables of families nationwide. In 1929, Oakland sponsored the first Northwestern Turkey Show, which came to be known as the largest in the world. It was here that the broad breasted bronze turkey was developed.

Saturdays were busy days in Oakland as farmers and ranchers came to town to pick up their mail, shop at the general stores, and socialize. Saddle horses, buggies and cars lined Locust Street and cash registers rang all over town.

With so much business going on, it’s probably not surprising that Oakland attracted criminals looking for an easy score more than once. There were two bank robberies over the years. The first happened on June 29, 1934, when a young stranger driving a Model A Ford with California license plates robbed the bank of $2,000. As he made his getaway, bank clerk Earl Garrison ran out into the street and fired his pistol at the speeding car. Townspeople formed a quick posse and chased the robber down, capturing him a short distance away.

The second robbery took place on May 5, 1947, when two men entered with a sawed off shotgun and stole $35,000. Bank employee Tom Garrison, a relative of clerk Earl Garrison mention above, was tied up by the robbers but managed to escape and gave chase in his car until he ran out of gas. The robbers were later caught in Arizona but the stolen money was never recovered.

A third robbery attempt, in 1962, was thwarted when an insurance agent who had an office in the same building became suspicious of an open window in the bank’s basement and notified Police Chief C.W. “Turk” Manning and a highway patrolman. They showed up in time to catch three men who had entered the basement and were trying to drill in the bank’s vault from below.


Things move at a slower pace these days in Oakland, and the town has become popular with tourists who want to escape the busy pace of life in nearby Springfield or other towns along the Interstate 5 corridor. Today the beautiful old red brick buildings along Locust Street house antique shops, restaurants, and one of the nicest small town museums we’ve found anywhere.

Housed in the former Underwood Brothers Pioneer Grocery Store building erected by Alonzo Brown in 1893, the Oakland Museum’s exhibits include typical period rooms from local houses, a bank, general store, blacksmith shop, and artifacts from Oakland’s early days. Operated by volunteers, the museum has no paid staff and does not receive county, state or federal funds, depending on donations from visitors to pay the bills. 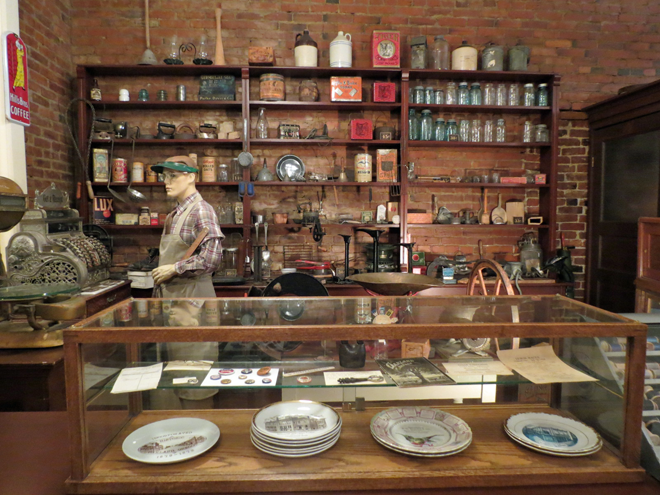 We spent a long time in the museum and were amazed at the quality of the exhibits and how much they have crammed into a relatively small space. Everything from farm equipment to antique household appliances and  signs and posters from the good old days. The museum alone is well worth the trip to Oakland. 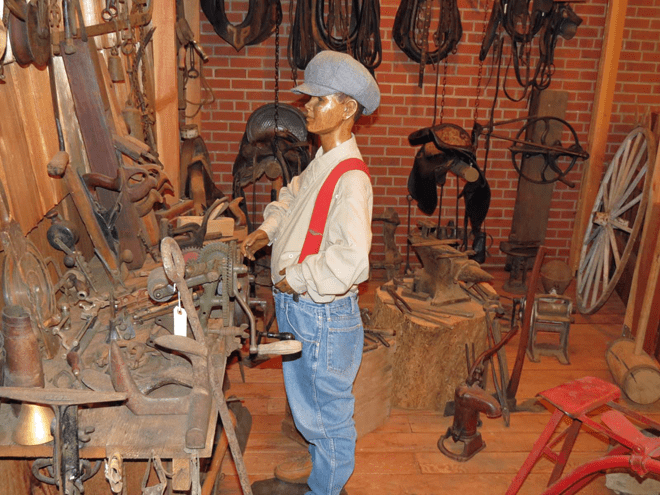 But don’t stop there, because there is a lot more to see and do in Oakland. Stroll along Locust Street and visit the shops, where friendly storekeepers will make you feel welcome.  Operated by three generations of the same family, Stearns Hardware has been serving the community for over 125 years. 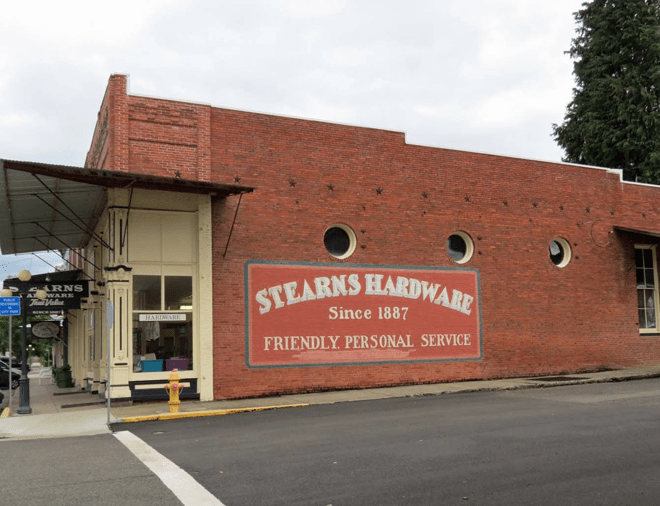 Housed in what once was once the Beckley Pharmacy, Tolly’s Grill and Soda Fountain is popular with visitors and locals alike and serves up some delicious treats. 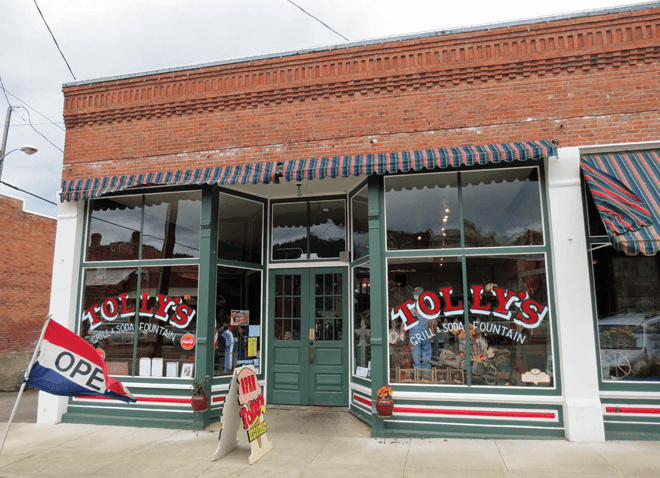 Sitting at a stool at the old style counter or one of the tables arranged next to a beautiful curved stairway to the second floor, it’s easy to feel like you have been transported back in time to the days when small town kids and those in from the farm for a Saturday’s adventure eyed one another as they shared a milkshake or ice cream sundae. 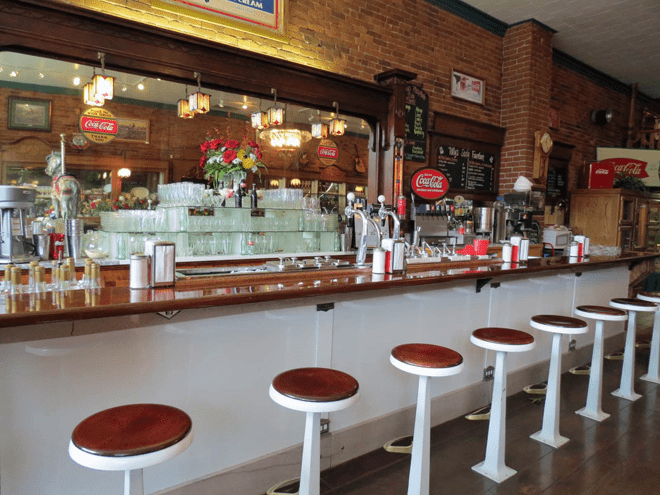 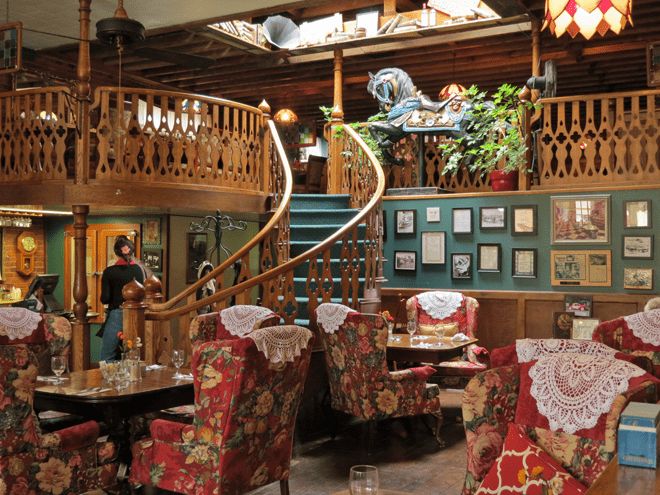 Across the street, the popular Oakland Tavern offers great sandwiches, beer, wine, and spirits. Stop in for a snack or a drink, and don’t be surprised if some of the local folk strike up a conversation or invite you to play a game of pool. That’s because nobody’s a stranger in Oakland. They know that once you visit their friendly little community, you’ll be back.

Today is your last chance to enter our latest Free Drawing. This week’s prize is an audiobook of Big Lake, the first book in my Big Lake mystery series and the book that launched my career as a fiction author. To enter, all you have to do is click on this Free Drawing link or the tab at the top of this page and enter your name (first and last) in the comments section at the bottom of that page (not this one). Only one entry per person per drawing please, and you must enter with your real name. To prevent spam or multiple entries, the names of cartoon or movie characters are not allowed. The winner will be drawn this evening.

Thought For The Day – Sometimes when I close my eyes, I can’t see.

2 Responses to “A Hidden Gem In Oregon”