For a brief time when I was a youngster my father’s work took us to southern California. We didn’t stay long and I don’t remember a whole lot about it, but one memory that stands out is of a bearded man who stood alongside the road waving at people as they drove into Laguna Beach. I recall at least one time when my father pulled the car over and chatted with him for a while, and he gave my sister and I each a piece of candy.


My parents have been gone a long time, and I wondered if that was a real memory or just something my childhood mind had dreamed up. Maybe an imaginary friend or something? But when I mentioned him to our friends Orv and Nancy Hazelton a while back, they both knew about The Greeter, who at one time was the unofficial ambassador for Laguna Beach. I did some research on him and found his story fascinating.

Eiler Larsen was born in Aarhus, Denmark in 1890 and his father managed the local poorhouse, where those who had fallen on hard times could find refuge. Exposure to so many people in such need as a child instilled an early sense of humanity in him that helped shape his life. For as long as he lived, he freely gave anything he had to those less fortunate.

Larsen seemed to be born with a wanderlust and he spent years wandering around Europe, South America, and the United States, surviving on odd jobs and doing a stint in the Danish Army. Larsen enlisted in the U. S. Army in January, 1918 and served with an infantry unit in France during World War I. Wounded in the leg, he had to use a cane for the rest of his life.

Probably the world’s first hippy, Larsen cared little for material things. He seldom held a steady job, picking fruit in the San Joaquin Valley or working as a day laborer when he needed money. He was more interested in experiences and people than things. He hiked the Appalachian Trail from Maine to Georgia, hung out with musicians, actors, and migrant workers, and wherever he went he greeted people with a wave and a hearty “Halloooo!”

In the early 1940s, Larsen moved to Laguna Beach, where he quickly became a fixture, standing at an intersection of the Pacific Coast Highway, waving at each passing car and calling out his happy greeting, “Halloooo!”

Most people enjoyed seeing him and his customary welcome, but there are always a few spoilsports anywhere you go, and some of the local busybodies in Laguna Beach complained to the city council, saying “The Greeter”, with his shaggy hair and beard, was a public nuisance. But the wave of public support that quickly swelled up drowned out the naysayers, and over time Larsen was declared by the mayor to be the community’s Official Greeter in a sidewalk ceremony.


Local business owners supported him with occasional odd jobs, a rent free room, and free meals. Larsen was always humble and showed his gratitude in every way he could. Over the years, Larsen developed a large fan base and was featured in dozens of paintings, postcards, photographs, and even statues. 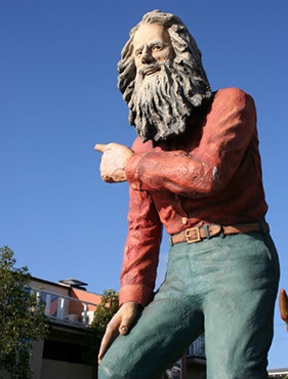 The wanderlust never left him, and Larsen would make occasional forays away from Laguna Beach but he always returned before too long. On one of these adventures he walked to Palm Springs, where he began greeting people on a street corner there. But folks there were not as friendly and he was escorted out of town by the police and told not to come back. No problem, he simply walked back home. Every year he walked 30 miles over the mountains to attend the Easter sunrise service at Mount Rubidoux in Riverside, and to Solvang, California for the annual Danish Days Festival.

Though he never had any money, Larsen considered himself wealthy, saying “Some people have millions of dollars and no friends. I’ve got practically nothing and thousands of friends who drive by to greet me.”

As he got older, illness began to plague Larsen. He had emphysema, his old leg wound ached, and he suffered a stroke in early 1967. He longed to see his homeland once again, and friends and supporters raised over $3,000 to send him back to his hometown on a visit.

He returned to Laguna Beach, living in his rent-free room, and continued to greet visitors to the city. No matter how much his physical problems hurt him, they never dimmed his smile or silenced his greeting, “Halloooo!”

Finally in 1971, suffering from bladder and colon cancer, Larsen had to stop. Friends arranged care for him at a nursing home, where he passed away on March 19, 1975. He was buried at Los Angeles National Cemetery.

The Greeter may be gone, but he is not forgotten in Laguna Beach. A statue of him stands in front of a business on the Pacific Coast Highway, and a life-sized redwood carving welcomes guests to Greeter’s Corner restaurant, named in Larsen’s honor.

In honor of Larsen’s love of books, the City of Laguna Beach designated the road beside the city library as Eiler Larsen Lane. And there are some that claim that every once in a while some weary driver coming into town after a long day on the road has caught a fleeting glimpse of a shaggy haired bearded man in a red shirt and heard a bellowed greeting, “Halloooo!”

If you like small-town mysteries, be sure to check out Brushed Away, the third book in my friend Jason Dees’ popular Benny James mystery series. It’s free for the next couple of days on Amazon, and I’m sure you will enjoy it. Jason’s a very nice guy, and he writes a darn good story, too!

2 Responses to “The Greeter of Laguna Beach”