Note: This story is from the November-December, 2015 issue of the Gypsy Journal.

In the tiny village of Ilwaco, Washington we discovered a fascinating small-town museum that is a treasure trove of local history. The Columbia Pacific Heritage Museum tells the story of this unique region that many call the Crossroads of History, where the mighty Columbia River meets the wild Pacific Ocean.

Displays in the museum’s galleries cover the earliest times when the Chinook Indians called this place home to the settlement years when European immigrants arrived and made the Long Beach Peninsula a year-round home, profiting from fishing, logging, and tourism. 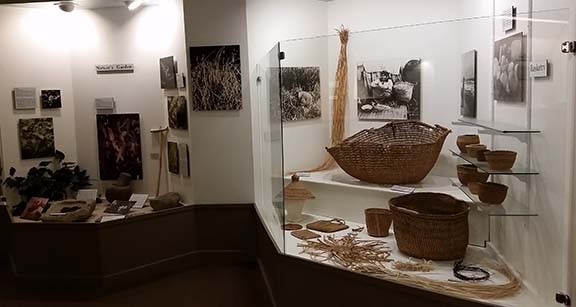 The first gallery that visitors come to is called the Land of the Canoe People and tells the story of the Chinook people who lived here for hundreds of years. Everything they needed was here. The forest provided fruit and wild game, the rivers and ocean were sources for wildfowl, fish, and other seafood, and the cedar trees that grew in abundance supplied the wood for their canoes and plank houses. The trees’ inner bark was used for making baskets, rope, hats, and clothing. The rivers and portage routes were highways for communication and trade with other tribes.

The Chinook used open weave baskets like this to carry and store shellfish, salmon, roots and berries. 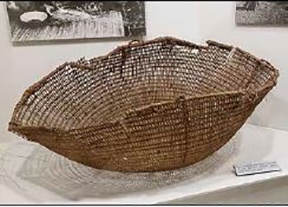 The Chinook flourished here long before the first Europeans arrived on the scene, bringing with them diseases that swept through their population with devastating effect. Treaties that were made but never ratified stole their land, but even today the Chinook people still remain here in their traditional homeland.


The Exploration Gallery covers the arrival of the first Europeans in sailing ships searching for the Northwest Passage. The first Euro-American, Captain Robert Gray, came here in 1792. In late 1805, the Lewis and Clark Expedition came downriver in dugout canoes. They were exhausted from their long trip overland, had very little food, and were not prepared for the harsh coastal winter. They soon crossed the wide Columbia River to establish a winter camp on the south shore. Others followed, a trickle at first, and then a flood. The newcomers from afar craved furs and established trading posts along the coastline and into the interior. Others followed and established towns and cities.

The Village Gallery gives a look into life in the region long before modern conveniences like telephones and automobiles. It includes a mockup of early-day Ilwaco, complete with a doctor’s office, general store, dressmaker’s shop, church, and homes.

As they are today, early industries in the region were resource based. The fourth gallery includes displays on fishing, crabbing, and logging, including fish traps, saws, and other tools of the trade for those who worked on land and sea.

The coast here is known as the Graveyard of the Pacific, and a display includes items recovered from ships lost at sea. 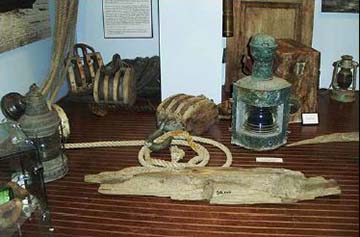 Because of the treacherous waters of the mouth of the Columbia River, the US Coast Guard’s Cape Disappointment Station is home to the National Motor Lifeboat School. This unique training facility is the only heavy-weather training school in the Coast Guard and draws surfmen-in-training from all over the world. The 26-foot drill boat on display in the museum represents early day lifesaving equipment. 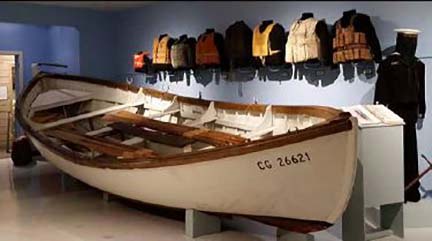 The Ilwaco Railway and Navigation Company operated here as a passenger and commercial railroad from 1888 to 1930. The Long Beach Peninsula has been a summer playground for generations of families from Portland, Oregon and Seattle, Washington, along with other cities and towns across the region. Passengers from the Oregon side of the river would cross on a ferry and arrive on the Washington shore at Megler, near today’s Astoria-Megler bridge. From there they boarded special trains that brought them to Ilwaco, from which they went on to cottages and resorts in Seaview, Long Beach, and further north on the Peninsula. This became known locally as the Clamshell Railroad.  The museum’s 50 foot long N scale model railroad layout demonstrates the early train route.


Outside the main building is the early freight depot and an 1889 passenger coach from the railroad. When it was retired it was used as a cottage in nearby Seaview. 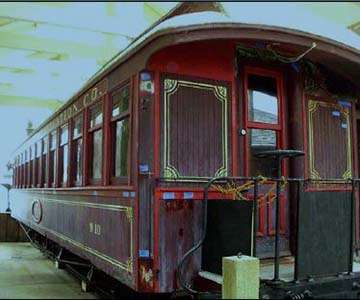 The museum’s mezzanine gallery tells the story of French adventurer Gérard d’Aboville, who rowed solo across the Pacific Ocean from Japan to Iwaco in 1991. There is a model of his 26-foot boat, the Sector, and a video about his journey. The trip was hazardous and the lone sailor braved typhoons, sharks, and high seas. His journal of the trip recounts being capsized numerous times, never sure if he could get the vessel righted and back into it before he drowned.

The mezzanine also holds a display of early toys and dollhouses. One was built by Dr. Robert Blancher, a local dentist, and is an exact miniature reproduction of the home he lived in, which still stands in town today. The museum’s final gallery has special revolving exhibitions, as well as exhibits honoring local veterans, high school students, and other residents who call this special place home.

A visit to the Columbia Pacific Heritage Museum had been on our bucket list for years, and every time we drove through Ilwaco we mentioned that we had to check it out someday. I’m glad we did, because it was well worth the time. We always enjoy small town museums, and this was one of the best we’ve seen in a long time.

The museum is located at 115 SE Lake Street and is open from 10 a.m. to 4 p.m. Tuesday through Saturday and noon to 4 p.m. on Sundays. The museum is closed on Mondays. There is a small admission charge, which is waived on Thursdays, and children are always admitted free. Parking is on the street, and might prove difficult for large RVs. For more information on the museum, call (360) 642-3446 or visit the museum’s website at www.columbiapacificheritagemuseum.org.

A lot of you do your online shopping by clicking this Amazon link or the Amazon Search box at the top right sidebar of this blog. We appreciate that because when you purchase an item on Amazon any time of the year from one of our links, we earn a small commission, which helps us offset the cost of publishing the blog.

So far over 60 people have entered our latest Free Drawing. This week’s prize is an audiobook of Big Lake, my first novel and the first book in my Big Lake mystery series. This is the one that made the New York Times bestseller list and launched my career as a mystery author. To enter, all you have to do is click on this Free Drawing link or the tab at the top of this page and enter your name in the comments section at the bottom of that page (not this one). Only one entry per person per drawing please, and you must enter with your real name. To prevent spam or multiple entries, the names of cartoon or movie characters are not allowed. The winner will be drawn Sunday evening.

Thought For The Day – Be naughty, save Santa a trip.

One Response to “Small Town Treasure”