Note: This story is from the July-August, 2016 issue of the Gypsy Journal. 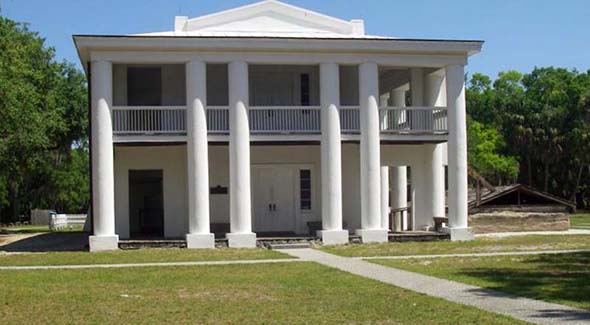 Major Robert Gamble built his beautiful home between 1845 and 1850 as the center of operations for a large sugar plantation. Florida’s Gulf Coast from Crystal River south was an ideal area for growing sugar cane and many plantations thrived there.

When work began on the plantation, the Seminole Indians were strongly resisting the loss of their traditional homelands to settlers and government efforts to move them west to Indian Territory. That, combined with the harsh climate, natural predators, and disease, made construction a challenge. By the time the fields were cleared and the beautiful mansion was finished, the bottom had dropped out of the sugar market and prices had plummeted. Major Gamble found himself deeply in debt. He was forced to sell the plantation to meet his obligations and left the area.

The property went through a series of owners, and by the time the Civil War began, Captain Archibald McNeill owned the mansion. McNeill, a sea captain, became one of the most successful blockade runners due to his knowledge of the backwaters and inlets along the Gulf Coast to keep supplies and necessary products moving during the war.

On April 2, 1865, General Robert E. Lee informed Jefferson Davis that he could no longer protect the Confederate capital at Richmond, Virginia and advised him to evacuate. The Confederate president and his cabinet fled south. Refusing to admit defeat, Davis hoped to flee to a sympathetic foreign nation to form a government in exile. But before he could do that, he and his entourage were captured on May 10 near Irwinville, Georgia by a detachment of Union General James H. Wilson’s cavalry.


Confederate Secretary of State Judah P. Benjamin managed to escape capture and made his way to the Gamble Mansion a few days later. Using his intimate knowledge of the coast, Captain McNeill was able to set sail out of the Manatee River, which fronted the Gamble Plantation, and sneak out to sea under the guns of the Union blockade. He transported Benjamin to Nassau, in the Bahamas, safe from capture. Benjamin eventually reached England, where he went on to practice law. Some believe that a fortune in Confederate gold is still buried somewhere on the old plantation grounds or nearby, though one wonders how a man on the run, hiding out in the dense forests and swamps of Georgia and Florida while being pursued by the Union Army, could have managed to carry very much gold with him.

At its peak, the plantation included 3,500 acres, and more than 200 slaves worked the property and processed the sugar cane. Over the years there were other owners, and like many Southern homes of its period, the Gamble Mansion fell on hard times. But while many of the old plantation homes eventually disappeared, in 1925 the United Daughters of the Confederacy purchased the house and sixteen surrounding acres and donated them to the State of Florida to serve as a historic site and memorial to Judah P. Benjamin.

These days the beautifully restored house is open to visitors. It is an excellent example of what life was like for those who owned Florida’s plantations during the antebellum era. Many visitors are surprised to find that it was really more of a functional home than a glamorous showplace as in movies like Gone with the Wind.


The house is in the Doric Revivalist Vernacular architectural style. Its columns and two foot thick walls are made of tabby, a unique construction material created by mixing lime extracted by burning shells with sand and water. The carefully restored interior rooms display period furniture and items that would have been found in a home liked this during antebellum times. The parlor includes a beautiful piano and delicate China tea set. 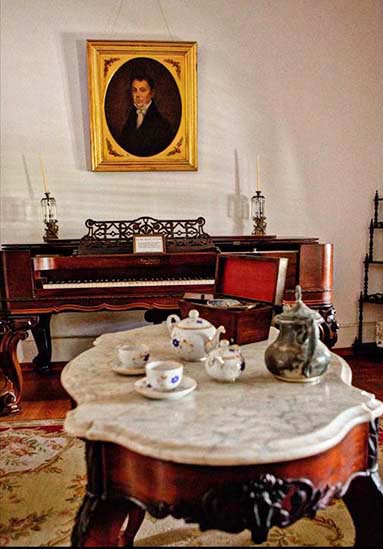 Displays outside focus on the operation on the sugar mill, including a 40,000 gallon cistern that provide the household with fresh water, a large cane roller that was used to crush cane stalks to squeeze the juice out of them, and the ruins of the old sugar mill. If you time your visit right, you may see volunteers in historical costume demonstrating old time skills or talking about life on the plantation during its heyday. 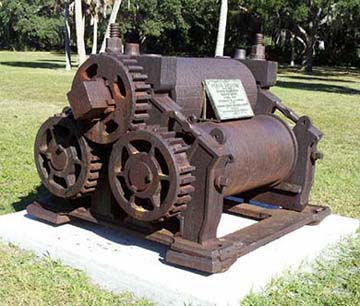 The park also includes the restored two story Victorian style Patten House, which was built in 1872 for owner George Patten.

Located at 3708 Patten Avenue in Ellenton, Florida, Gamble Plantation Historic State Park is open daily from 8 a.m. until sundown, 365 days a year. The mansion itself is only open Thursday through Monday from 9 a.m. to 5 p.m. Tours are given six times daily on those days. The house and visitor center are closed on Thanksgiving Day, Christmas Day, and New Year´s Day. The park and grounds are free to visit. Tours of the house cost $6 for adults and $4 for children. Parking could be difficult for a large RV. Visitors should leave their RV at one of the many local campgrounds and visit in their tow vehicle or dinghy. For more information about Gamble Plantation Historic State Park, call (941) 723-4536.

A lot of you do your online shopping by clicking this Amazon link or the Amazon Search box at the top right sidebar of this blog. We appreciate that because when you purchase an item on Amazon any time of the year from one of our links, we earn a small commission, which helps us offset the cost of publishing the blog.

Be sure to enter our latest Free Drawing. This week’s prize is an audiobook of my friend Ken Rossignol’s Pirate Trials: Famous Murderous Pirates Book Series: THE LIVES AND ADVENTURES of FAMOUS and SUNDRY PIRATES. To enter, all you have to do is click on this Free Drawing link or the tab at the top of this page and enter your name in the comments section at the bottom of that page (not this one). Only one entry per person per drawing please, and you must enter with your real name. To prevent spam or multiple entries, the names of cartoon or movie characters are not allowed. The winner will be drawn Sunday evening. 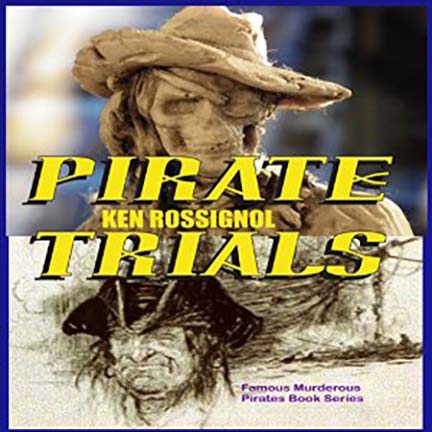 Thought For The Day – You have to put off being young until you can retire.