The story of early American expansion in Florida was written in blood. For years whites and Seminole Indians had clashed in quick, violent confrontations over land, cattle and slaves. These ongoing conflicts helped justify the United States government’s policy of removing native peoples to reservations far away from their homelands. Washington decreed that all Seminoles be removed to reservations in Oklahoma starting on January 1, 1836.


Well aware that the Indians would strongly resist being deposed, military authorities began strengthening the small garrison at Fort King, in what is present-day Ocala, where the government had set up an Indian agency to oversee the removal of the Seminoles. In late December, 1835, Major Francis L. Dade was picked to lead a relief column from Fort Brooke, at present-day Tampa. The Seminoles had other plans. The Second Seminole War was about to begin.

Osceola, the great chief of the Seminoles, planned to kill Wiley Thompson, the Indian agent at Fort King, then join chiefs Alligator and Miscanopy to ambush Dade’s column of infantry and artillery troops.

The route along the Fort King Military Road was a harsh trek, made even worse by the weather. For five days the soldiers battled rain, cold and rough terrain as they made their way north, unaware that the Indians were watching them every step of the way from the edges of the thick forest along the trail.

On the morning of December 28, Major Dade assembled his 107 cold and weary troops and tried to lift their spirits, promising that with two-thirds of their trip behind them, including the most dangerous ambush sites, the end was near. “Our difficulties and dangers are over now,” Dade told his men, and promised them three days of rest and a belated Christmas celebration once they reached Fort King. Dade and his men had no idea they had only moments left to live.

About 8 a.m. the troop column was making its way through open terrain in a cold rain. The wet and miserable men trudged along, their coats draped over their muskets and ammunition boxes to protect them. Complacent now that he felt they were in safe territory, Major Dade failed to send out his scouts to guard their flanks, an error that would prove disastrous. Hidden under cover of pines and palmettos, 180 Seminoles waited for the signal to fire.


The Indians’ first volley was fired at close range and tore through the military column, killing or wounding half of the soldiers. Among the first killed were Major Dade and Captain Upton S. Fraser. Three of the six officers who survived that first attack were wounded.

Captain George W. Gardiner managed to rally the panicked soldiers still standing and returned fire with a six-pound cannon, driving the Indians back a short distance and allowing the soldiers time to throw up a hasty breastwork of logs and brush. While some of the troops tended to the wounded, Captain Gardiner ordered others to collect ammunition and weapons from the bodies of the dead.

Soon the Seminoles rallied and launched a second attack that continued unabated until about 2 p.m. By then there was no return fire from the low breastwork. Most of Major Dade’s command was dead. The Seminoles and their allies, a collection of runaway slaves, swarmed over the few surviving troops. Hatchets and knives flashed and were soon stained crimson. Three wounded soldiers, Joseph Sprague, Ransom Clarke, and Edwin DeCourey somehow were left for dead and managed to escape. DeCourey died soon after, but Clarke and Sprague managed to make it back to Fort Brooke alive. Major Dade’s black interpreter, Louis Pacheco was spared and taken captive.

The ambush was a success for the Seminoles, who had only three warriors killed and five wounded. After looting the soldiers’ bodies and dumping the column’s cannon into a nearby pond, they withdrew to Wahoo Swamp to celebrate their victory.

Seven weeks later, on February 20, 1836, General Edmund P. Gaines led an expedition to the ambush site. The bodies of the slain troops were identified and given proper military burials. The eight fallen officers were interred on the east side of the trail, and the 98 enlisted men were buried in two mass graves within the log breastwork that had been their final stand. The column’s cannon was retrieved from the pond where the Indians had dumped it and mounted muzzle down at the head of the officers’ graves as a monument to the fallen troops. Six years later, on August 14, 1842, the men of Dade’s command were laid to rest in the National Cemetery in St. Augustine. The expenses involved in moving the bodies were met by donations from other soldiers and officers.


While the Seminoles won the battle, their days were numbered and eventually most of the tribe was forced onto reservations the government had set up in Oklahoma, a land totally unsuited to their traditional way of life.

Today the ambush site is Dade Battlefield Historic State Park and is located in Bushnell, Florida, five or six miles off of Interstate 75. Every year re-enactments of the battle are held under the huge live oaks and pine flats where the brave men of Major Dade’s column perished. 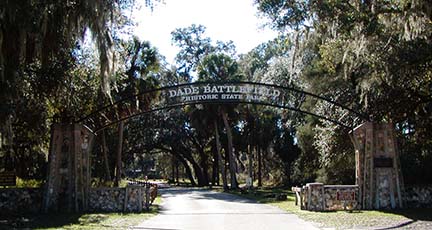 The park includes a visitor center with exhibits and artifacts from the Seminole Wars, a re-creation of the log breastwork the soldiers used for defense, a bandstand, playground, and picnic area with restrooms. An interpretive trails meanders through the forest where the battle raged. Trail labels mark the military road and battlefield. Well behaved pets are allowed in the park, but must be kept on a leash at all times.

The park is a quiet, peaceful place that belies the terrible suffering that went on here. Today children frolic and squirrels play where once men were engaged in deadly battle, one side fighting to preserve the only way of life they had ever known, the other fighting in vain just to survive.

Thought For The Day – My superpower is holding onto useless junk for years, and then throwing it away a week before I need it.