Note: This story is from the May – June 2016 issue of the Gypsy Journal.

Long before movie theaters, cable television, and satellites that beam entertainment right into our living rooms, people enjoyed live entertainment. During the early days of the 20th century vaudeville acts performed at just about every large and small city in America. But if you lived in a rural area you might never see one of those venues. Way back in 1913, a circus aerialist and carnival owner named James Adams, who was touring with a vaudeville company, came up with an idea for a floating theatre.


Not that he was the first to think along those lines. There were numerous show boats operating on the rivers of the Midwest, drawing large crowds every place they stopped. But Adams wanted to launch his enterprise to serve audiences in the Tidewater area of North Carolina and on the Chesapeake Bay.

People scoffed, like they do at most dreamers, but he was undeterred. Adams purchased a barge as the foundation, drew up the plans himself, contracted with a company in Washington, North Carolina to construct his floating theatre, and personally selected the lumber to be used.

The James Adams Floating Theatre was launched on January 27, 1914, and started moving north along the coast, calling on small towns, beginning a saga that would continue for the next 27 years.

Self-contained and weighing 436 tons, the theatre was pulled from port to port by two tugboats. She was an impressive vessel, 128 feet long and 34 feet wide. The main auditorium was 30 by 80 feet, with a seating capacity of 500 people. The balcony could accommodate another 350.

From May through November the theatre brought music, comedy, and drama to the cities, towns, and tiny hamlets along the Chesapeake Bay, though it did occasionally venture as far north as New Jersey and south to Florida. An advance publicity team would arrive in town first, spreading the news of the performances that were on the way and drumming up business. Staying for a week at a time, the show troupe put on a different performance every day, drawing many repeat visitors.

Everybody aboard had more than one job. Between acts, as scenery was changed and refreshments sold, the actors became comedians, singers, musicians, dancers, jugglers, and gymnasts to entertain the audience. They also pitched in as stagehands and ticket sellers, and often played more than one role in the performances. Even the crews of the tugboats that moved the theatre served as musicians, ticket sellers, or doing anything else that was needed.


Performers lived on board, and although their wages of $10 per week were not outstanding, they enjoyed comfortable living quarters, excellent food, and when they were not working they entertained themselves with swimming, fishing, and relaxing on beaches after the shows.

While the theatre’s performances were popular in the small isolated towns where she called, and people lined up to pay 25 cents to see a show, the local fire and brimstone preachers condemned them as sinful. That didn’t seem to slow down the traffic very much at all. However, if enough people didn’t come to see the shows, Adams did not hesitate to cancel the rest of their stay and move on to the next stop.

Basically a scow with a tall superstructure, the floating theatre was not very maneuverable, and rough seas created lots of problems. It actually sank four times over the years, but was brought back to the surface and put back to work. After a particularly perilous trip from one port to the next, it was not uncommon for a good number of the cast and crew to jump ship and go off in search of greener pastures on shore.

In the summer of 1924, author Edna Ferber became fascinated with the romance of life aboard a floating theatre. She spent five days living and working with the theatre company, writing furiously on a yellow pad as the actors and crew regaled her with stories of their adventures. The result would be her most famous novel, Showboat, which spans 50 years between the 1870s and 1920s, and tells the story of the life of the beautiful Magnolia Ravenal and her traveling showboat family. When the book hit bookstores in 1926, the James Adams Floating Theatre got a strong publicity boost for being the inspiration for the book.

Two years later, Jerome Kern and Oscar Hammerstein adapted Edna Ferber’s novel into what many consider to be one of the greatest American musicals, Show Boat. At first Ferber was opposed to the idea of her book becoming a musical, but Kern and Hammerstein won her over. After seeing it performed she was so moved that she told them she had tears in her eyes and her hair stood on end. 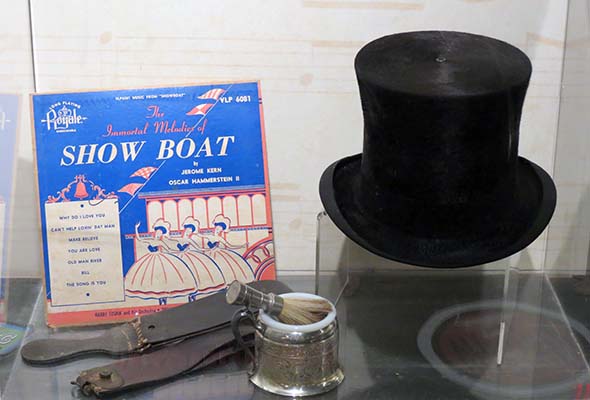 But even the book and movie could not keep the floating theatre alive for much longer. Changes in management, the advent of radio, movies, and mass transportation that drew her audiences away, and the Great Depression all played a role in her decline. The theatre went through a series of owners, and gave its last performance in Georgia in January, 1941. The actors and crew left, the lights went out in the stage for the last time, and the theatre was sold at auction to someone who intended to convert it into a cargo barge. But that was not to be. As it was being towed across the Savannah River it caught fire and was destroyed.


Today the only reminders of the once popular floating theatre are some old newspaper clippings, show posters, and a display at the Reedville Fishermen’s Museum in Reedville, Virginia, once a regular stop for the theatre. Included in the exhibit are models of the old theatre, a few stage props, and steamer trunks.

But there are some that would love to bring the old theatre back to life, and a movement is underway to create a new floating theatre to serve the coastal communities. You can learn more about their efforts at http://floatingtheatre.org/. If they succeed, I’ll be one of the first in line to attend a performance.

Thought For The Day – Advice when needed is least heeded.