After everything that happened to us in the last week, when I got up early Saturday morning to talk to somebody at Rush Truck Center in Jacksonville, Florida, where we had been towed in the night before, I wasn’t feeling very optimistic. But I had a Facebook message saying that my nephew, Jack Russell, who is involved in the trucking business, is friends with one of the honchos there. It’s always good to have somebody with some kind of connection in a situation like that.


As it turned out, though I very much appreciated Jack’s running interference for us, I’m not sure it was completely necessary. The first person I spoke to was a gentleman named Rex, who was the foreman on duty that morning. I explained our situation, and he was dismayed that the towing company had left us in the parking lot overnight, since it’s not the best part of town. Rex said he had a couple of trucks that needed attention, and as soon as he got his mechanics going on those, he would come out and see what he could do for us. And wow, he did a lot!

Rex said he didn’t want to keep us waiting while the mechanics were busy on other jobs, so he personally replaced the belts that had broken, working outside in the hot sun to get us back on the road. This man is an absolute prince, and I can’t tell you how much Terry and I appreciated him going far above and beyond the call of duty for two strangers who were physically and emotionally worn out and just wanted to go home. He had us buckled up and ready to hit the road by 12:30. Thanks Rex and the rest of the crew at Rush Truck Center, you guys are wonderful.

Our friend Jim Lewis was there to greet us with hugs and commiseration over all we had been through in the last week. We were thrilled to see that in the week we were gone the banana tree in our yard had sprouted several bananas. When they are ripe they are going on my breakfast cereal! 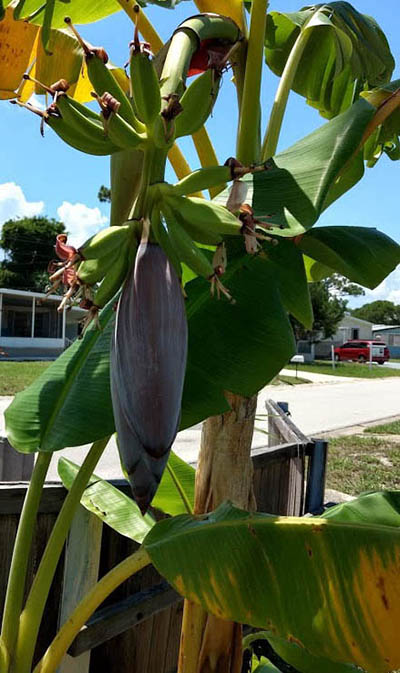 We spent part of the afternoon getting the critical things like toiletries, prescription medications, and our computers unloaded and back into the house. Then somewhere around 6 o’clock Jim drove us to Beef O’Brady’s for dinner. Back at home, it was very nice to relax in our recliners and watch TV for the rest of the evening. I was so wiped out that I didn’t even have the energy to hook my computer up to post yesterday’s blog, so I called my buddy Greg White, who helps me maintain our websites and blog, and asked him to just put something on to let the world know we were home safe. Thanks Greg.

Most of you know that we are night owls and not morning people, but we have been waking up earlier than normal for us for over a week now, and though we were so tired we thought we would probably sleep in, we were both awake sooner than expected yesterday morning and took advantage of the cooler temperatures to finish unloading everything out of the motorhome. One of the nice things about living here on the coast is that there always seems to be a slight breeze coming off the water to help keep it a little more tolerable than just a few miles inland.

So the motorhome is all unloaded and ready for new adventures with whoever winds up owning it next. A couple of people have said we should not let this last trip from hell turn us off of RVing. To clarify, we are not turned off of RVing. We fulltimed for over 17 1/2 years and it was a great lifestyle for a lot of those years. But life is about change and we are ready for a new direction.


We still plan to travel, just on a more limited basis. It makes no sense at all to have a 40 foot motorhome sitting neglected in a storage lot just to make one long trip year and some shorter excursions now and then. Any vehicle begins to have problems when it’s not used on a regular basis. I experienced that with my 1969 Corvette that I stored in a friend’s garage when we first went on the road, and now we are seeing it with the Winnebago. In spite of the recent problems we’ve had with it, it’s a very nice upscale diesel pusher that sold for $225,000 when it was new. It needs to belong to someone who will really use it.

It is a 2002 Winnebago Ultimate Advantage with two slides. Low blue book on it is somewhere around $56,500, and high book is somewhere around $63K, not including all of the upgrades we have added, like the power awning, two flat screen TVs, two custom oak computer desks, engine fire suppression unit, residential refrigerator, automatic rooftop satellite dish, electrical management system, tire pressure monitoring system, electric holding tank dump valves, Blue Ox Avanta tow bar, three-year-old Splendide washer/dryer combo, and the list goes on. If you have $45,000 cash and are in the market, you could own it today. 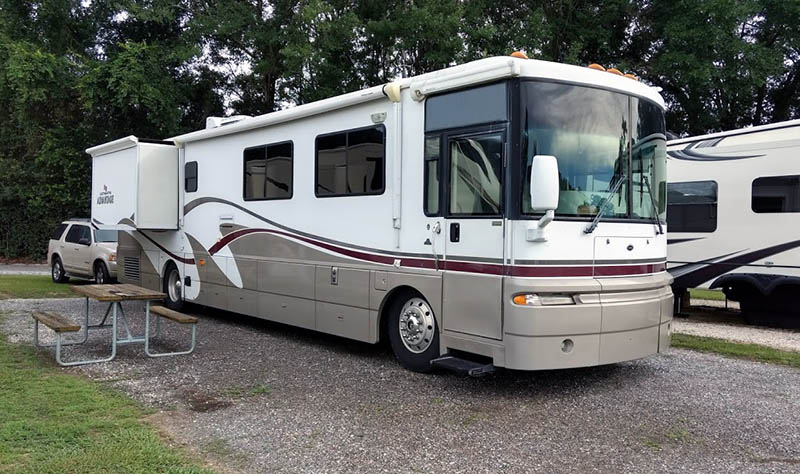