Something that Terry and I learned very quickly after buying our house is that customer service is sadly lacking in this area. Businesses will make you all kinds of promises, but when it actually comes to following through on them, forget it. Just because you have an appointment doesn’t mean they will keep it. They show up whenever they feel like it, if they show up at all.


We have experienced this several times when we have called repair and service companies. I needed a welder to replace some rusted steel tubing in the frame of our garage, and three different ones that I called never showed up. Well, I take that back, one did actually show up unannounced two days after the appointment we had set up. He wanted me to give him a large deposit to cover materials, but didn’t really know when he could get around to doing the job. But he would put me on the list! Thanks but no thanks. I called somebody else about another project, and he didn’t show for the appointment, but did call a week later to tell me all about the problems going on in his life and that if I would give him a second chance he would be out there that afternoon. It was like listening to a real life country song. Yeah, that didn’t happen, either.

But I have to give kudos to John’s Appliance & Bedding in Daytona Beach. When we ordered Terry’s new Speed Queen washer and dryer they said they would be delivered on Tuesday (yesterday) afternoon, and that somebody would call us Monday to give us an exact time. When that call came in, we were told they would be here between 3:30 and 4:30 PM. But yesterday around 2 o’clock they called again to say that they were running early, and would it be okay if they came by in the next half hour or so. Sure, why not?

The two man delivery crew came and took out the old units, installed the new ones, and did a great job of it. You will note that the dryer, on the right, sits up higher than the washing machine does. That’s because we had to make a pedestal to set it on so that the door would clear the step landing in front of it. 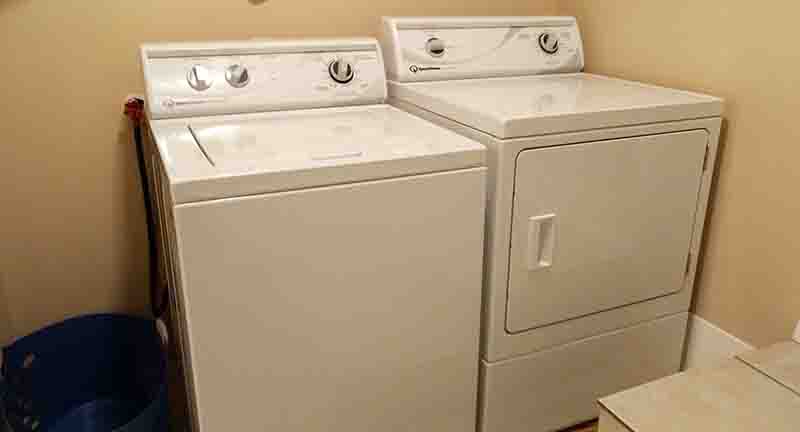 Terry is very pleased with her new washer and dryer, and we are both very pleased with the excellent customer service from John’s Appliance & Bedding. I wish everybody around here cared as much for their customers.

Since we are downsizing and stepping away from the RV lifestyle, I’ve been giving a lot of thought to getting rid of our old grandfathered in Verizon unlimited cell phone plan. I have it on both my phone and on a 3G WiFi air card, but since we will not be traveling as much or as extensively, I’m not sure it’s worth continuing to pay for them. While newer “unlimited” plans don’t compare, they are cheaper and would probably meet all of our needs, so there’s no use paying more than we have to every month.

I’m also going to start getting rid of some things we won’t be using now that will be spending most of our time at home. One of those things is the HiBoost cell phone signal booster I reviewed recently. While it’s not a good choice for a large RV unless you are willing to use it in one area of the rig, it would work well with a Class B or small RV like that. You can see my review on it at this link. The only time it was used was for the review, since the company’s weBoost 4G RV Cell Phone Signal Booster Kit works better for bigger rigs like our Winnebago motorhome. The retail price of the system is $349.99. If anybody is interested, I will let it go for $300, shipping included. Just let me know.


Several people asked if we will be selling our Thousand Trails Elite membership. That has already been snatched up, and one of our blog readers got a heck of a deal on it. We were sorry to see it go, because it has saved us a ton of money over the years, but I didn’t see us using it enough to justify keeping it any longer.

Thought For The Day – I’m a firm believer that every traffic jam is a chain reaction that begins with just one idiot.

One Response to “Great Service From John’s”