Most of my time lately has been spent working on the new issue of the Gypsy Journal so I can get it sent out to our subscribers on time. But I had to put that aside yesterday for a Daytona day.


I had a follow-up appointment at the VA Medical Center in Daytona Beach, and it looks like despite my best efforts to the contrary, I’m still going to be around to bother all of you folks for a few more years, at least.

A couple of weeks ago when my friend Jim Lewis and I went to the medical center to submit requests to make it our primary care facility, me from Tucson, Arizona, and Jim from Texas, he pointed out this mural on the wall to me and Jim asked if that looked familiar. Yeah, I’ve seen that scene before in real time. Then Jim said to look closer, and when I did I was a bit surprised. The Huey helicopter bears the 1st Cavalry Division’s patch, and the name Headhunters. That was my unit back in the bad old days. 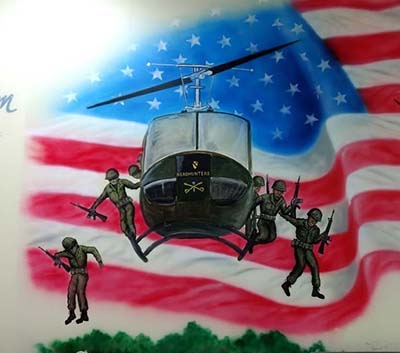 This isn’t the first time I’ve come across something or someone from those days. Years ago Terry and I were talking to a fellow we had both known for years back in our hometown in Arizona and crossed paths with on a regular basis. He and I both realized that we been in the same unit in the 1st Cav at the same time, but in different companies that worked together a lot of the time. As we were talking, a particular incident came up and Pete got a strange look on his face and he said that Terry and I needed to come to his house for dinner that night. We did, and were shocked to find that he had a picture of he and I standing together on top of a burned out tank. I still get goose bumps when I remember seeing that.

And when we toured the Army Aviation Museum at Fort Rucker, Alabama a few years back, our tour guide mentioned that he was a retired Army helicopter pilot. As it turns out, he did two tours in Vietnam with the 1st Cavalry Division. But what was amazing was that we both also spent time with the 17th Air Assault Group. I’ve met a lot of guys who were in the Cav over the years, but he was the first one I’ve ever met from the 17th! He left Vietnam just a couple of months before I arrived, but we knew some of the same people, and probably even flew in some of the same aircraft. Small world, isn’t it?

I dumped my piece of junk iMac computer a long time ago and went back to a Windows unit (yes, Greg White, I know, you told me so), but Terry has been nursing hers along for years now, and it’s gotten to the point where it isn’t much more than an oversized paperweight. She really needed a new computer, so once we were done at the VA we went shopping for one. They don’t make very many laptops these days that still have a CD /DVD player. You can buy an aftermarket unit to plug into a computer, but Terry really wanted it built in if possible.

After a lot of shopping around she finally found a 17.3 inch HP Envy with the built-in CD/DVD and the other features she needs to keep up with our mailing list, bookkeeping, customer files, and such. We never make a computer purchase without checking in with Greg White, and once I ran the specs of the laptop we were looking at by him, he gave it his stamp of approval. So today while I get back to work on the paper, Terry is going to be busy installing software and transferring all of her files to the new computer and getting it ready to use.


Every once in a while I like to share information about some of the books my author friends have just released, or other books I am reading and find enjoyable. The one I’m reading now is called GI Brides: The Wartime Girls Who Crossed the Atlantic for Love. It tells the stories of several British women who fell in love with American servicemen during World War II and left everything they knew to start a new life in America. It’s interesting to read about how differently people in England saw the “Yanks” during those days. Some considered American GIs saviors who were there to help save the world from the Nazis and welcomed them with open arms, while others deeply resented our servicemen and disliked everything about them. To them our guys were no more than rude, crude intruders who were to be shunned, at best. And if they thought that about the soldiers, imagine what they thought about the British girls who married them! It’s an interesting read, I think you’ll like it. 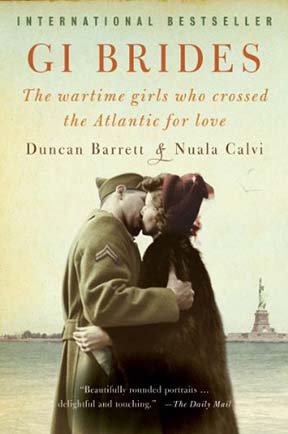 Thought For The Day – Those who are rich in love are the richest of all.

2 Responses to “A Daytona Day”