Well, my buddy Greg White can no longer call my boat a hangar queen. I bought the Key Largo back in early December, but then between having a house guest for a couple of weeks, finishing up my new book, Big Lake Celebration, and getting the new issue of the Gypsy Journal out, it’s been sitting in the garage ever since. So yesterday we decided to remedy that situation.


I’d be lying to you if I said that Terry and I weren’t both a little bit apprehensive. We have Sea Eagle kayaks, I’ve had some small rowboats over the years, and about 35 years ago I had a cabin cruiser for a while. But that was a long, long time ago. And except for kayaking, I don’t think Terry has done much boating at all. We weren’t really all that worried about driving the boat. Our concerns were more about getting it off the trailer and into the water, and then back onto the trailer when we were done.

While we were getting ready to go, one of our neighbors here in our little manufactured home community stopped by to say hello. And as it turns out, he was the right visitor at the right time. Curtis King used to operate tour boats on the Erie Canal, and has done a lot of boating here on the Intercoastal Waterway. He gave me a few pointers and we set off a little more confident.

One of the things I was concerned about was backing the boat trailer down the ramp into the water. I’ve never been real good about backing trailers up, but by taking my time and following Miss Terry’s excellent directions, it was a snap.

We got the boat into the water without any problems, and Terry stood on the dock holding a line to it while I went and parked the truck and trailer. Then we got onboard, I started up the Yamaha outboard, and we went out into the channel. A lot of the water here is very shallow, or skinny, as boaters call it. In some places two feet is about all you have under you, and there are a lot of oyster beds that can tear a boat up pretty quickly if you’re not careful. So we planned to stay in the channel, which is anywhere from 12 to 20 feet deep.


We took the boat south probably three or four miles, just taking our time and getting a feel for how it handled. We saw a lot of folks fishing, several dolphins playing in the water, and we were having a good time. A lot of this area is a minimum wake zone because of the manatee, so we weren’t going very fast.

And then, suddenly, the boat lost power. The Yamaha motor didn’t stall, but it spit and sputtered and seemed like it was going to quit. I cut back on the throttle and shifted into neutral and kept it running, but when I tried to give it more gas it did the same thing.

My first thought was that we were running out of gas. Several experienced boaters had told me that one should never trust the fuel gauge on a new or used boat until they actually had spent some time in it. So even though our fuel gauge said full, I had brought along a two gallon can of gas, just in case.

The can had some kind of safety feature on the spout, which made it difficult to pour into the built in tank, but we got a little bit in. I put the boat in gear, advanced the throttle, and we had plenty of power. I decided we should turn around and head back toward home, but after a few minutes the engine did the same thing. Again, it didn’t stall, it just lost power. I shifted into neutral again and Terry poured some more gas into the tank, and it started running back out, indicating the tank was indeed full. I repeated the process of giving it some throttle and we were good to go again for another five minutes or so, and the same thing happened again! This time around I just put it in neutral, waited a minute or so, and we took off again with plenty of power.

By then we were back by our dock and facing the next challenge, getting the boat to the dock, and then onto the trailer. It didn’t help that the current can be pretty strong up here and it was pushing us around a bit. I cut power coming up to the dock, but we still managed to bang into it. Not the most gracious performance by a new boater ever seen, I’m sure.

But fortunately, Curtis, our friendly neighbor, had come down to check on us. I backed the trailer back into the water, which was again easier than I had thought. Terry got out of the boat, and in the process managed to hook her finger on a piece of metal underneath one of the fishing seats and cut it open. Ouch! Fortunately it wasn’t very deep, but it’s right in the bend of the finger, which makes it uncomfortable.


I told Curtis I was really nervous about getting the boat onto the trailer, so he offered to get in with me and help me do it, while Terry stayed at the trailer to guide us in. And I’ll be darned it was wasn’t easier than I expected, following Curtis’s directions! He was very patient with me and complemented me on a job well done, although I know all the credit went to him.

It’s important to flush out an engine that’s been in salt water, so once we had the boat out of the water I hooked the fresh water hose at the dock to the water inlet on our motor and turned it on to begin the flushing. Four stroke outboard motors have something called a pee hole. I’m sure there is a more politically correct term for, it but that’s what folks call it, and when the motor is running, that’s what it does. Water comes in to cool the motor and comes back out in a steady stream through the pee hole.

And, of course, guess who was standing right in front of the pee hole when it started peeing? Curtis got a good laugh out of that and said it would have made a great episode for America’s Funniest Home Videos. Up until then I had stayed pretty dry getting the boat into and out of the water, but it didn’t take long for me to be drenched! So would it be fair to say I was pissed, even if I was laughing?

In talking to Curtis about the problems I was experiencing with the motor, his first suggestion was bad fuel. I told him the tank was full when we purchased the boat, and it ran fine during our test ride. But he said the 10% ethanol fuel sold around here could easily start to break down in the month the boat had been sitting in the garage. He recommended something called Starbrite fuel additive or Seafoam, both of which are supposed to displace the moisture from water in the fuel and are available everywhere around here.

But he also noticed that the fuel line, which connects to the motor with something like an air chuck type device, had come off and the line was just laying there. Now, obviously it was on before, because we were driving the boat, which meant the motor was getting gas. But if that connection wasn’t solid, it is possible we could have also been sucking in air. Curtis was pretty sure that after he reconnected it, and after I buy some of the additive and put in the tank, we should be good to go next time around. The only other possibility I can think of is a bad fuel filter, but the dealer said they changed that when they serviced the boat prior to us picking it up.

Back at home, we washed the boat and trailer down thoroughly to remove any salt residue, and then with Terry’s help I backed it into the garage without much effort. We’ll get the hang of this boating thing yet!

Today I’ll get some additive to put into the tank. Unfortunately, a storm system started coming through the area last night, bringing lots of rain, some thunder and lightning, and a cold front. This weekend the high temps will be 63° today and 56° on Sunday, with more rain scheduled. So I don’t think we’ll be out on the water again anytime soon.

That’s okay, I want to get to work on my next John Lee Quarrels book and see what he’s been up to. It’s always something with those characters that live inside my head!

Have you entered our latest Free Drawing yet? This week’s prize is the newly released Forever Series boxed set by my dear friend Mona Ingram. It includes a total of eight stand-alone romance novellas. Each book tells the story of a woman at a crossroads in her life. They contain no graphic sex, but instead focus on the woman’s journey and how it leads to love. The set retails for $9.99, but you could win one free! To enter, all you have to do is click on this Free Drawing link or the tab at the top of this page and enter your name in the comments section at the bottom of that page (not this one). Only one entry per person per drawing please, and you must enter with your real name. To prevent spam or multiple entries, the names of cartoon or movie characters are not allowed. The winner will be drawn Sunday evening. 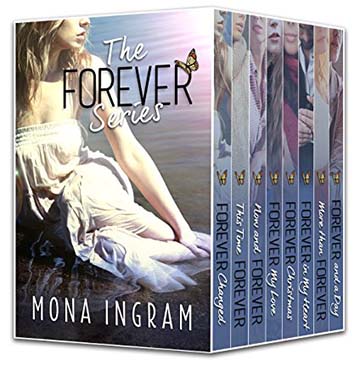 Thought For The Day – Old dreams die the hardest deaths.

11 Responses to “Drenched in Yamaha Pee”