Nick's Blog » All Over But The Proofing

I finished the new issue of the Gypsy Journal yesterday and printed it out for Miss Terry to do a final proofreading. She will finish that up this morning, then I’ll make any corrections that are needed and get it uploaded. Then, sometime late this afternoon or early evening, I’ll be sending out the link to all of our digital subscribers.


We’ve crammed a lot into this issue, including feature stories on Bok Tower Gardens in Florida; Diamond Caverns, the Abraham Lincoln Birthplace National Historic Site, and the Louisville Slugger Museum, all in Kentucky. There is also a feature on Tennessee’s Fort Donelson National Battlefield, and the Museum of Miniatures in Carlton, Indiana. But that’s not all, we’ve also got some other goodies in there that I think you’re going to like.

We did stop working on the paper for a while yesterday when our old friend Pat Astbury stopped in for a visit. We met Pat and her late husband Scott many years ago and felt an immediate kinship with them. We lost Scott to cancer three years ago, and Pat recently bought a small Phoenix Cruiser motorhome and is slowly easing back into the RV lifestyle. She said it was a big adjustment learning to do everything by herself, but it gives her a real sense of accomplishment knowing she can do it. We’re proud of you kid, you can do anything!


A little later on I took the trash down to the dumpster, and on the way I met Phil and Candace Robb. Phil has been a blog reader for quite a while now, and it was nice to put a face with the name. Candace said they have a son named Nick, and it gets confusing sometimes when Rob is reading the blog and tells her something Nick said, because she never knows if he’s talking about their son or me.

I enjoyed chatting with Phil and Candace, but we had to cut it short because the mosquitoes were out in force. I think all the recent rain in this area has really gotten them riled up or something. I’m not saying the skeeters are big or aggressive here, but the local warning signs should give you an idea. 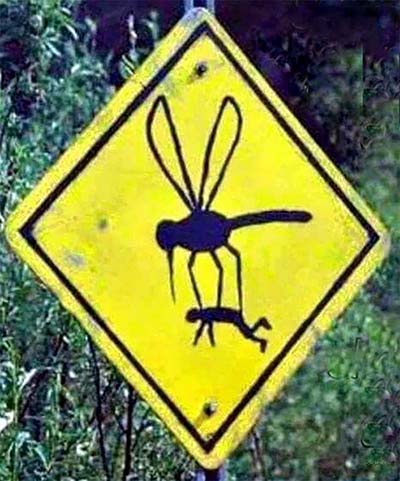 We have a cold front coming in and are supposed to have a couple of nice days, with temperatures in the mid-70s and low humidity. I think after we get the new issue sent out we may go out and do some sightseeing and playing. I need a break before I settle in and begin working on my next book.


I’m not sure when we will begin our southern travels. Sometime in the next week or two, I think. There’s no place we have to be and no schedule we have to be on, which is nice. And who knows? If I get into writing mode and Terry throws a new project or two on her loom, we may stay a while longer. Then again, we may shake up the Jell-O and start the wheels rolling as soon as the holiday weekend is over. Only time will tell.

Thought For The Day – There comes a time when you have to stop crossing oceans for people who wouldn’t even jump in puddles for you.