Nick's Blog » Taking A Day Off

I’ve been working pretty hard on my new book and I’m just past the halfway point. While I’ve been busy with that, Terry finished her weaving project and then has been catching up on her bookkeeping. So yesterday we both needed a day off.


After some errands in the morning, in the afternoon we drove over to Mishawaka. We stopped at Barnes & Noble, because even though we both have Amazon Kindles, we still can’t pass up a bookstore. Of course, I’ll admit sometimes I see something in the store and eventually order it online because it’s cheaper and we have free Amazon Prime shipping.

I didn’t find anything I couldn’t live without, but Terry did get one good weaving magazine.

She was due for an eye exam, so our next stop was at a place called Eyemart Express. The young lady at the desk said that with no appointment, Terry could wait and see if they could squeeze her in that afternoon, but there was no guarantee. Or, she could make an appointment for the next day (today), which is what we did.


Our next stop was Golden Corral for dinner. I told Terry the food is okay, actually pretty good as buffets go, but the main reason I go there is to people watch. No matter how down I am on myself, by the time I walk out of there I think, “Nick, you’re not all that bad after all!”

On the way back to Elkhart Campground we stopped at WalMart, about my least favorite place to shop. Fortunately we were in and out pretty quickly. Back at home we watchd television and relaxed, enjoying the rest of our day off.

This afternoon we will go back over for Terry’s eye exam.

I’ve shared many stories about the crazy things that people tell me or ask me, and some people say I must be making it up to have some fun with you folks. Nope, it’s all as serious as a heart attack. But I’m not the only one who hears some crazy stuff.

A couple we know is workcamping at a place where they do every summer, and he told me that one of their guests approached him and said he needed to be moved to another site. My friend asked him if there was a problem with electric, or water, or what, and the fellow told him no, there was too much dog crap in the yard and he did not want to walk in it.


Now, these folks are two weeks into a month long stay. And they have a large dog. The workamper asked them why they had waited two weeks to complain, and the camper replied that when they arrived the yard was clean. Yes, he admitted, it was from his dog but so what, that didn’t change a thing. Our workcamping friend then left and came back with a shovel and a large plastic bag and said, “It’s your dog, clean up after it.” The camper couldn’t believe how rude he was and said they would never come back there again! Yeah, I’ve kind of got the feeling they wouldn’t be welcomed with open arms if they tried.

One of my author friends, Randy Morris, has a brand new travel book that you should check out, Traveling North America: Boston, Halifax, and L’Anse aux Meadows. It’s the eighth book in Randy’s popular World Travels series, and besides a lot of excellent travel information, Randy has included some very good photographs. 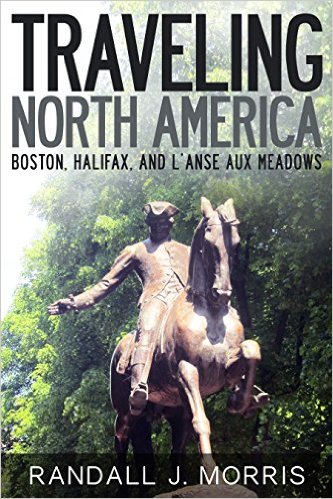 2 Responses to “Taking A Day Off”