Note: This article appeared in the November-December 2003 issue of the Gypsy Journal.

It may not be the largest or most well-known monument in Washington, D.C., but the National Law Enforcement Officers Memorial is certainly a moving tribute to the men and women who have made the ultimate sacrifice for their communities.


In America, a police officer is killed nearly every other day, on average. More than 62,000 officers are assaulted each year, and more than 21,000 are injured while on duty. In America today, 740,000 law enforcement officers are serving as the first line of defense between the criminal element and law abiding citizens.

Dedicated by President George Bush in 1991, the memorial honors America’s federal, state, and local law enforcement officers killed in the line of duty, starting with the first recorded death of an American law enforcement officer, in 1792. Located in Judiciary Square, the memorial is an understated testament to the heroes who keep us safe every day.

The monument was designed by Davis Buckley, a Washington, D.C. architect, and sits on three acres of federally owned park land known as Judiciary Square. Located on E Street, between 4th and 5th Streets, Judiciary Square has been the seat of the judicial branch of U.S. government for over 200 years.

The focal point of the monument is a shallow reflecting pool, surrounded by lush grass and 128 trees. Every spring thousands of daffodils bloom, making the memorial one of the city’s most spectacular attractions. 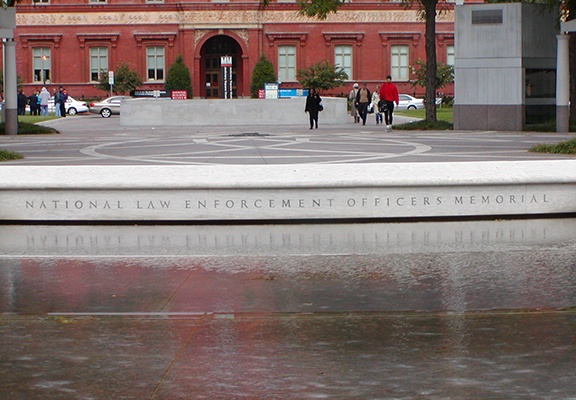 Two tree-lined “pathways of remembrance” border the park, each with blue-gray marble walls inscribed with the names of over 16,000 law officers killed in the line of duty. The names are inscribed in random order, and directories at the memorial assist visitors in locating a particular name. Each year in May, during National Police Week, new names are added to the memorial and a candlelight vigil is held to honor the fallen officers. 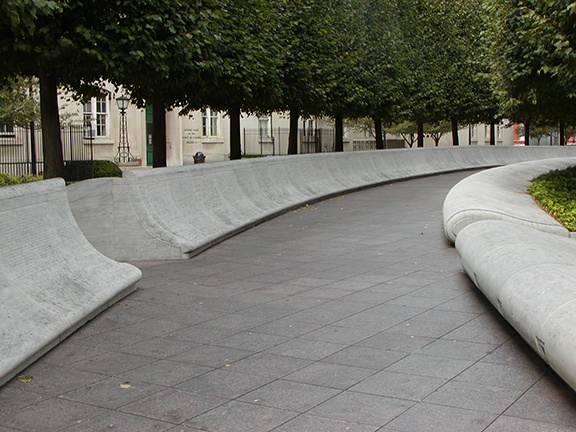 Each entrance is guarded by statues of an adult lion protecting its cubs. Sculpted by Raymond Kaskey, the lions represent the protective role our police officers play in society, and symbolize the courage, strength, and valor of our nation’s law enforcement officers. An inscription on the wall reads “In valor, there is hope.” 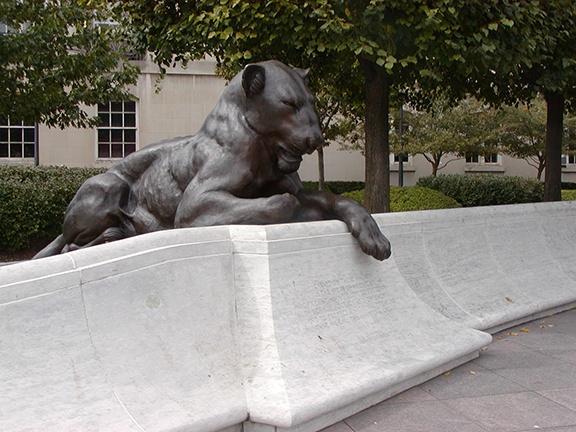 The National Law Enforcement Officers Memorial has much the same impact on visitors that another Washington monument does – the Vietnam Veterans Memorial. It is not uncommon to see visitors moved to tears when reading the names contained on the memorial’s walls.


The first known law enforcement officer killed in the line of duty in America was Isaac Smith, a New York City Deputy Sheriff shot on May, 17, 1792 while arresting a suspect. The first female officer killed was Jail Matron Anna Hart, beaten to death by a prisoner during an attempted jailbreak in Hamilton County, Ohio, in 1916. Over the years, New York City has suffered the most officers lost of any department, with more than 540 deaths. California leads the states in overall law enforcement deaths, with over 1,300.

Located a short distance from the memorial, at 605 E. Street, a Visitors Center contains more than thirty exhibits that explain the history of the memorial and the law officers it honors. The Visitors Center also has a timeline of famous events in America’s law enforcement history, as well as displays on legendary law officers like Elliot Ness and Wyatt Earp. Touching displays tell the stories of several different officers whose names are listed on the memorial.

An interactive video system contains information on fallen officers, along with their photographs and the location of their names on the memorial’s walls. Many visitors are deeply moved by displays of personal mementos left by family and friends at the memorial. These include cards and letters, police shoulder patches, and uniforms.

A gift shop at the Visitors Center carries a selection of souvenirs, including hats, jackets, and posters. A portion of the proceeds from these sales goes to provide a permanent maintenance endowment for the memorial.

Plans are underway to establish the National Law Enforcement Museum on a plot of land directly across from the memorial. Authorized by Congress in the year 2000, the museum will become the premier source of information related to law enforcement history and safety. The museum will also be an important tool for training future law enforcement officers.


On your next trip to Washington, D.C., take some time to get away from the crowds along the Mall and visit the National Law Enforcement Officers Memorial. I think you will come away with an even greater appreciation for the men and women who have given their all for the rest of us, and for those who continue to serve and risk their lives for us today.

Be sure to enter our latest Free Drawing. This week’s prize is an audiobook of my buddy George Wier’s excellent small town mystery, Murder In Elysium. To enter, all you have to do is click on this Free Drawing link or the tab at the top of this page and enter your name in the comments section at the bottom of that page (not this one). Only one entry per person per drawing please, and you must enter with your real name. To prevent spam or multiple entries, the names of cartoon or movie characters are not allowed. The winner will be drawn Sunday evening. 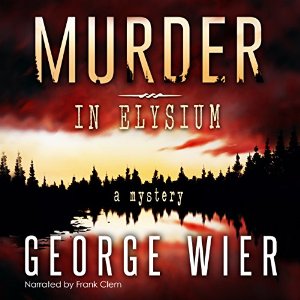 Thought For The Day – The only purpose for a pistol is to fight your way back to the rifle you should have never laid down in the first place.