Nick's Blog » Will We Make It?

It rained all of Sunday night in Seaside and we had showers off and on all day long Monday. I think the warmest it got up to was about 62°. A typical Fall day on the Pacific Northwest coast.


We are leaving for Newport this morning where we are scheduled for two weeks at Whalers Rest Thousand Trails resort. We really like Newport but looking at the weather forecast, the highest temperature we can expect is 62° for the next week, and several days the high will only make it to 59°. And there is rain predicted about half of those days. So will we make it for two weeks or will we decide to begin our trek south before that? I guess time will tell.

As Terry was saying yesterday, it’s nice to have a gray chilly day now and then to stay inside and weave and write and just relax, but a steady diet of that gets old before too long, and cabin fever sets in. It’s still pretty hot in Southern California and Arizona, so we’re in no rush to get there.

In preparation for today’s trip, I dragged my air compressor from one of the Winnebago’s storage bays and topped off the motorhome’s tires. This thing has been one of the best investments I’ve ever made, and though I bought mine at Sears I don’t see them there anymore. But you can find the same compressor on Amazon under the Porter Cable name. They apparently made them for Sears under the Craftsman brand. It is small enough to fit in a storage bay and has no problem with the big tires on our motorhome. 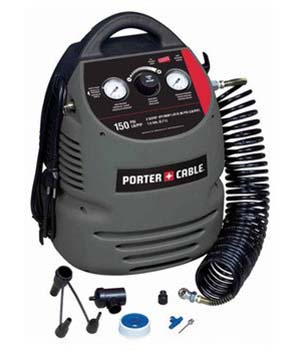 Speaking of tires, so far I really like the Toyos we put on our Winnebago before we left Arizona. The ride is as good or better than what we got with our Goodyear tires, and I’m sure the quality is better, based upon my experience with Goodyears and the experiences of other RVer’s I know.


As I said, right now are booked for two weeks at Whalers Rest. If the weather was better we could extend for a while, but we probably won’t since we have reservations in Apache junction, Arizona for the month of December and we don’t want to be too rushed getting there. We might stop in Atwater, California and take advantage of our pal Nancy Kissack‘s hospitality on the way south. We spent a lot of time flying kites and hanging out with Nancy this summer and really enjoyed her company. We’re looking forward to seeing her again.

I’d also like to get over to Morro Bay, where we honeymooned. I’ve been planning on doing a second mystery series, this one RV-based, and the first one would be set in Morro Bay. That gives me a good excuse to go there and do some research, right? Sure, there might be some kite flying done, and definitely some seafood would get consumed while we’re there, but really, it’s all about the research.


Thought For The Day – Be with those that bring out the best in you, not the stress in you.