I do most of my writing at night when there are fewer interruptions, so we seldom get to bed before 2 a.m., and 3 is not uncommon. So when the telephone rang at 6 a.m. yesterday morning I was not pleased. Especially since it was somebody trying to sell me something. Usually I turn the phone’s volume off when we go to bed, but I had forgotten about it, and we paid the price. Grrrr!

We managed to get back to sleep for a while, but I never did get back to that dream about being stuck in a snowstorm on a bus full of cheerleaders. It’s probably just as well. With my luck they would have thrown me under the tires for traction. Once we were up, we started the day with the usual routine of answering all of the e-mails that came in overnight. One was from a young couple who want to go fulltime and make their living on the road with their two kids and three dogs and don’t have any money. They wondered if I thought it was reasonable to do it in a popup tent camper pulled by a 1987 Chevrolet pickup. I hate to step on somebody’s dream, but really? What could possibly go wrong?

About 1 p.m. we went to the post office to mail out a bunch of orders, and waited a long time as two clerks very slowly handled an ever-growing line of customers. We watched as one of the clerks emptied a big canvas cart full of packages by throwing them through a doorway, where they (hopefully) landed in another cart, all in one piece with no damage to the contents.

While we were there we learned that the new postal rate increase that goes into effect Sunday will raise the cost of mailing an issue of the Gypsy Journal by three cents. It’s not as much as we expected, but since we were only making seven cents an issue before the price increase, it reinforces our awareness that sooner or later the printed edition will have to go the way of the dinosaur. We know that will cost us some subscribers who will not switch to the digital edition, and we will hold off as long as possible, but we have had to accept the fact that it’s inevitable.

When we had lunch with our pals Dennis and Carol Hill the other day they told us about a restaurant called Hot N Juicy Crawfish, which has locations in several cities, including here in Las Vegas. Since we both love seafood of any kind, we decided to check it out for linner, the meal that comes after lunchtime but before dinner. 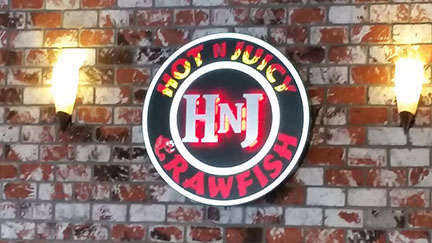 The restaurant offers everything from crab and mussels to crawfish and shrimp. First you decide what you want to eat, and then you pick a seasoning – Louisiana Style, Juicy Cajun, Garlic Butter, Lemon Pepper, or the Hot N Juicy Special. Then you choose a spice level – Mild, Medium, Spicy, or Extra Spicy. Our waitress said the mild is a little bit hotter than Tabasco Sauce. Terry had crawfish étouffée as an appetizer, along with a pound of crawfish, while I opted for a pound of shrimp and French fries. Everything is served with the heads on, and you are given a bib and plastic gloves. You’ll need them because it’s a messy, but very delicious meal. You can tell by Terry’s smile that this place gets the stamp of approval. 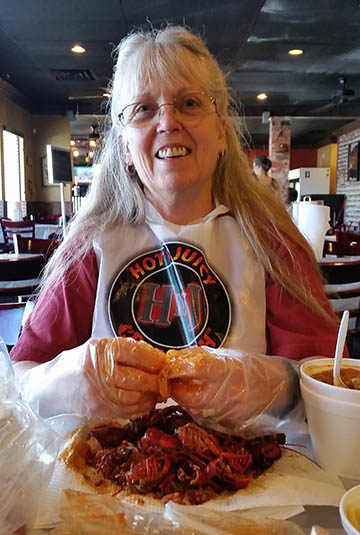 From the restaurant we stopped at a couple of stores on the way home, and back at the campground, subscriber and blog reader Bill Duke came by to say hello and we chatted for a little while. Bill told me that he just had two of the Goodyear tires on his fifth wheel fail, and noted that the tires were stamped Made in China. So much for buying from an American company. I can’t count the number of reports we’ve heard lately of Goodyear tire failures, besides our own. I’ll never have them on one of my vehicles again.

Have you entered this week’s Free Drawing yet for an audiobook of Birdsongs by my friend Jason Deas? To enter, all you have to do is click on this Free Drawing link or the tab at the top of this page and enter your name in the comments section at the bottom of that page (not this one). Only one entry per person per drawing please, and you must enter with your real name. To prevent spam or multiple entries, the names of cartoon or movie characters are not allowed. The winner will be drawn Sunday evening. 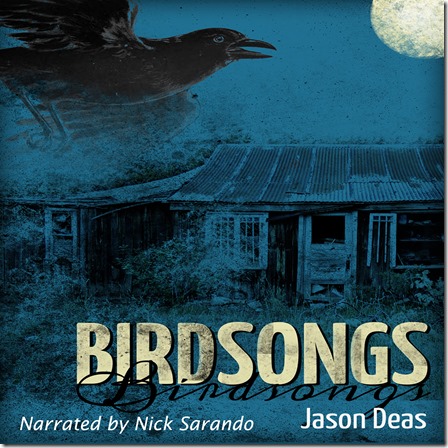 Thought For The Day – When the past calls, don’t answer. It has nothing new to say.

4 Responses to “They Were Hot N Juicy!”