Who are these modern day gypsies who spend their lives on the road? What prompted them to leave their former homes and communities for a life on wheels? Each week we will introduce you to some of the fulltime RVers we meet in our travels and those who read this blog.

Fulltime RVers come to the mobile lifestyle by many routes. For Reggie Wallace, from Oceanside, California, it started with camping trips to Yosemite National Park with her father and brother when she was growing up. While Mike’s family, who lived in Alhambra, took weekend trips into the mountains for picnics, he had not done much camping until the couple were married. On their weekend tent camping excursions they decided that at some day they would be fulltimers. Now, with 5½ years on the road in their NuWa Hitchhiker Premier fifth wheel trailer, they are having the time of their lives. 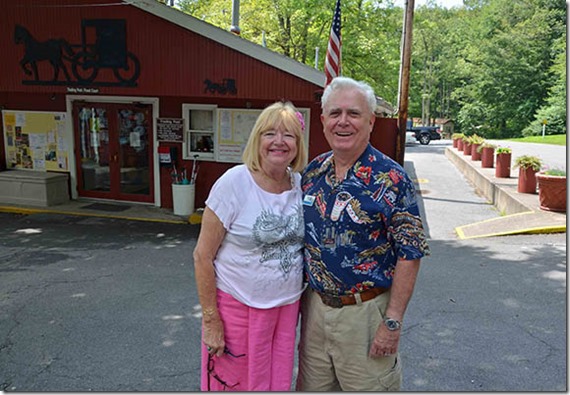 In their former lives Reggi worked in sales, while Mike spent 24 years with the Air Force, was an engineer with NASA for 12 years, including the Apollo, Space Shuttle, and Viking Lander missions. He also worked for a financial institution for 12 years. Now, when not traveling, they enjoy workamping at PA Dutch Country campground in Manheim, Pennsylvania, where Mike is the Business Administrator and Reggi is the Activities Director. Mike also plans to start selling some of his photographs this year.

When asked what they like best about fulltiming. Mike and Reggie said seeing new places and historic sites, meeting people, and visiting friends and relatives across the country.

And what do they most dislike about fulltiming? RVers who do not pick up after their pets and do not keep them on the leash; loud parties that go on well past the start of quiet time, those who do not follow the rules, and RVers who arrive very late and expect to set up and then sit around discussing how hard it was. It’s all about common sense and courtesy. Or maybe a lack thereof. They also said they miss their children, grandchildren, and great grandchild.

The hardest part of leaving their old lives was leaving friends, selling their home, and giving away their possessions. But all that was offset by the freedom from being tethered to a brick and mortar home and being able to go where they want and to move on if they don’t like where they are.

The Wallaces’ hobbies include photography, eating the local specialty dishes, learning the history of the areas where they are traveling, visiting National Parks, sightseeing, and enjoying the scenery of our beautiful country.

They are joiners and belong to Escapees, Good Sam Club, NuWa Hitchhickers, Passport America, Coast to Coast, Thousand Trails, and participate in online forums to learn more about RVing and sharing their experiences.

Most fulltimers have favorite places they have visited that they will always remember, and for the Wallaces, those places include Alaska, the Canadian Maritime Provinces as well as Newfoundland and Labrador. But, like all fulltimers, they added that there are lots of others too numerous to list including Antelope Canyon and Canyon de Chelly in Arizona, South Dakota’s Badlands, and the Florida Keys. But there is still so much to see and do, and one of their goals is to see all 50 states, all of the provinces in Canada, and to explore Mexico

When asked what was their worst day fulltiming, Mike and Reggi said it was getting stuck in a friend’s front yard in Oak Island, North Carolina and having to have a semi tow truck to pull them out. Their friend had told them the yard was hard pack, and it was, for the first two inches, then the rear axle of their 5th wheel was buried in the sand below.

Best day fulltiming? They said there have been lots of them, from seeing their first bald eagle and grizzly bear in Alaska to seeing icebergs in St. Antony, Newfoundland, and traveling to Battle Harbour in Labrador, a defunct cod fishing village located on the island.

Mike and Reggi had a lot of excellent advice to give to newbies: Talk to fulltimers, research the lifestyle, read and ask a lot of questions. Go to RV shows to see whether you like a motorhome or a 5th wheel. Don’t impulse buy an RV, especially if you have not researched it. Go camping in a rented Class C for at least two weeks to see if you like the lifestyle. Don’t wait to get on the road; however, do it knowing as much as you can about the lifestyle. Both of you must agree to the lifestyle otherwise, it won’t be healthy for the both of you. The goal should be NOT have any storage units. So start early to downsize. Decide which state you want to make your domicile for voting, mail forwarding, and vehicle registration. Look into a membership like Thousand Trails – the cost (initial and yearly maintenance fee) are minimal when you travel more and stay at different places. Don’t be in a hurry to get to your destination, you will miss the scenery and historical/local sites. Research the area you will be traveling to – AAA tour books are good sources of information on what to see.

They also said to make sure you have all the necessary insurance and know what it covers (and what it doesn’t). Get applications for your smart phone that will provide information on various parks (AllStays, National Parks, military family camps, WalMarts, Pilot/Flying J, etc). They also recommend having copies of The Next Exit, and Milepost

when planning an Alaska RV trip.

Summing up their thoughts and feelings on fulltime RVing, Mike and Reggi said, “We love it. It is by far the best thing we ever did. We have seen so much as is indicated by the 1000s of pictures we have published on our online journal at http://mytripjournal.com/reggimichaelwallace”

Thought For The Day – I’m a second hand vegetarian. Cows eat grass and I eat cows.

One Response to “Fulltimers – Michael and Regina (Reggi) Wallace”