Everybody says it’s going to be a long, cold winter, and I believe that might be true. It got down into the 50s Saturday night and I was grateful for the blanket Terry draped across the foot of the bed. It wasn’t long before it got pulled all the way up!

It was another day spent working on corrections and formatting for my new travel book, while Terry threaded the headles of her loom, which is a long and laborious process. It was a nice day and we enjoyed having the windows and door open to air out the motorhome after having it closed up and the air conditioning on so much lately.

During the afternoon we took a break to make a quick trip into Colonial Beach to pick up a couple of things at the grocery store. This is beautiful country and we’ve been admiring the flowers that grow along the back roads around here, so I stopped to get a picture to share with you. 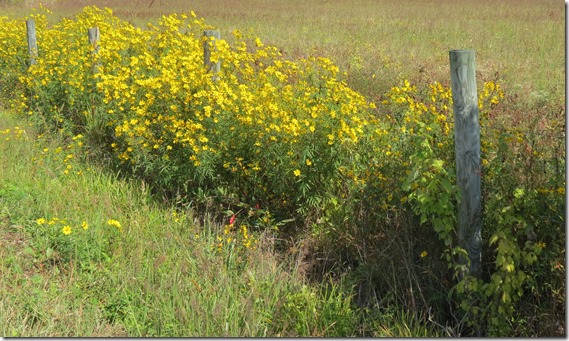 James Monroe, the fifth President of the United States, was born here in 1758, and there is a monument and small visitor center at is birthplace. We’ll have a feature story on President Monroe in an upcoming issue of the Gypsy Journal. 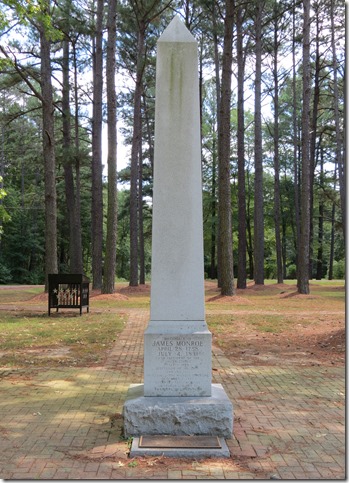 Back at home Terry warmed up the leftover pizza from Saturday and it was just as good, if not better. I told her that as much as I love her regular pizza made with traditional sauce, this new white pizza recipe she came up with may well be my new favorite.

While we were eating we heard a diesel pusher backing into the site behind us. When our last mail caught up with us it included the renewal stickers for our license plates, so after we finished eating we went outside to put them on. Terry commented that the toad that came with the new neighbors had an Adventure Caravans sign on it and as it turned out it was our friends Larry and Marlene Sazama, whom we last saw on the Washington coast a year ago! I always tell people that once you become a member of the fulltime community you’re always running into friends in every corner of the country.

Larry and Marlene brought a couple of folding chairs over and we sat outside talking about RV travels, caravans and anything else that came to mind as we slapped skeeters and enjoyed the evening. We hope to see them again soon in our travels. 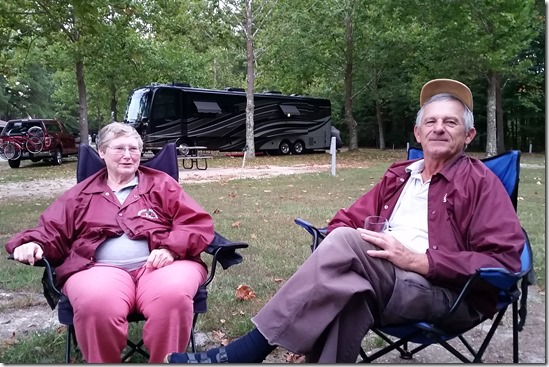 While we enjoy talking to both experienced RVers like Larry and Marlene and newbies as well, sometimes all I can do is shake my head and walk away. Just yesterday I had a conversation with a guy who plans to pull a huge fifth wheel with a ¾ ton truck four wheel (as opposed to dually) pickup. When I told him I considered that pretty marginal, he assured me his salesman said he’d be fine. I expressed my reservations about that and he got offended and told me that if he had to choose who to believe, me who had owned three or four RVs, or a salesman who had sold hundreds, he’d go with the experienced salesman every time. Well okay, then. All you can do is lead them to water. Whether they drink or not is up to them.

Congratulations to Denise Peoples, this week’s winner of our drawing for an autographed copy of John and Kathy Huggins’ excellent book, So, You Want to be a Workamper?. We had 190 entries this time around. Stay tuned, because a new contest starts soon!

Today we’re moving south to the Chesapeake Bay Thousand Trails preserve and hoping we’ll have better internet service. It seems like it has gotten worse every day we’ve been here.

Thought For The Day – Facts do not cease to exist because they are ignored.