Whatever happened to April showers bringing May flowers? Last night it was snowing here at Tiffany’s place, a few miles outside of Show Low, Arizona and the temperature was down in the low 30s overnight. Today the high will be just over 60, and depending on which weatherman you choose to believe, it will be somewhere between 29 and 24 tonight. Not to mention the fact that it’s cold, windy and snowing! I am not amused!

But at least we’ve got the grandkids to warm our hearts. This is Destiny, who will turn seven this week. Can you tell she loves her Grandma Terry? And I think Grandma kind of likes her too. 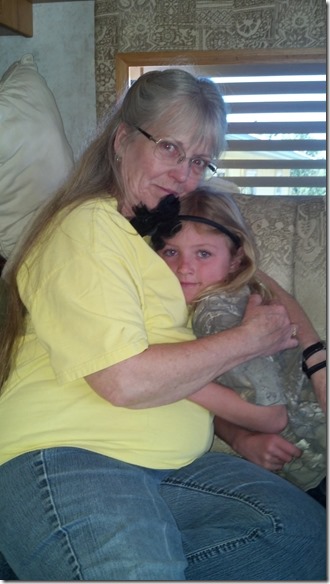 She is Tiffany’s youngest and she cracks me up. Consider this conversation we had yesterday morning:

Destiny: "That doesn’t even make sense."

Grandpa Nick: "If you ate beans what would you be full of?"

You just gotta love the grandkids! 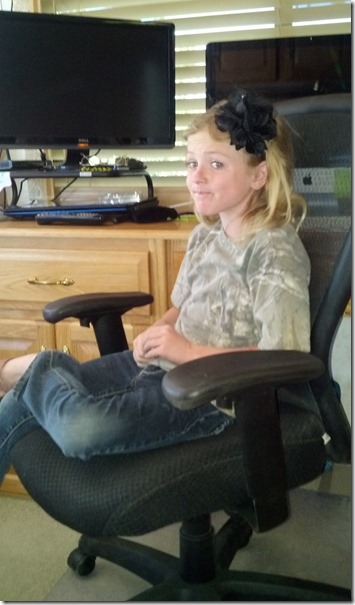 Before it turned so cold, we had a busy day yesterday. Scott and I were working on a couple of projects around the place and I spent at least two hours on the tractor. I’m far from being as skilled as Scott is with the thing, but with his careful direction I at least managed to dig a good sized hole without running over any of the dogs or horses, and I even avoided hitting the motorhome or their house. I’ll take my victories where I can get them.

During the afternoon the girls went to their dad’s house and won’t be back until after school on Wednesday. We’ll sure miss them until then!

We’re not the only ones having bad weather. Last night on Facebook, Gregg McHenry said it was cold and windy in Amarillo, with snow predicted by morning. Bobbie Chapman, of the excellent Chappy Trails blog, said they were getting the same thing in southern Colorado. And blog reader Arnold Silverman said they were supposed to be down in the 20s the next two nights at his place near Indianapolis. It seems like almost every region has something going on, from snow to strong thunderstorms, hail, and everything except a plague of locusts. But stay tuned, even that wouldn’t surprise me!

Speaking of bad weather, blog reader Helen Merton wrote to tell me that she and hubby George recently retired from their jobs with the state of California and are brand new fulltimers. Helen said they are headed to the Midwest and then on to New England, and asked for advice on a portable weather radio. I am a fan of the Ambient Weather WR-111-B-AC Adventurer Emergency Solar Hand Crank Weather Alert Radio

, which also has a flashlight and cell phone charger. Ambient makes several models and I like the ability several have to be charged with a hand crank in case power fails. 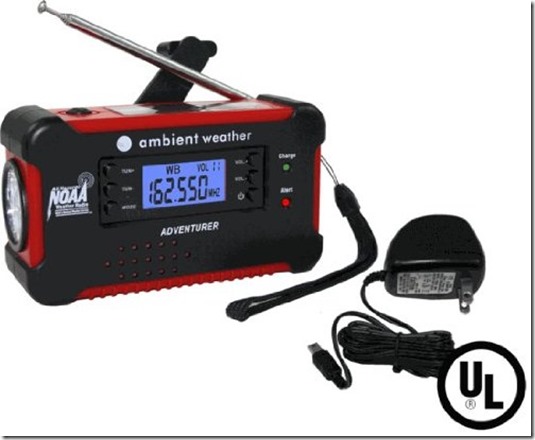 Congratulations to Wallie Libby, winner of this week’s drawing for an audiobook of Birdsongs

by Jason Deas! We had 117 entries in this week’s drawing, and if you haven’t won yet, stay tuned, because a new contest starts Wednesday.

Before I close, I want to wish a happy birthday to my daughter-in-law, Geli. I hope you have a wonderful day you pretty lady. We’re looking forward to seeing you and Travis when we get back east.

8 Responses to “Gotta Love The Grandkids!”