I had to laugh at an e-mail I got yesterday, from a lady who had contacted me a couple of years ago to ask me if it was true that most RV parks have a ten year rule and will not allow RVs older than that in.

As I said in a blog post about the Ten Year Rule back then, yes, it does exist. And no, it’s nothing to be worried about. For years we traveled in a 1976 MCI bus conversion and stayed in RV parks, from upscale “resorts” to small Mom and Pop places, in every corner of this country. In all that time, we were never turned away when we pulled into a campground.

Joyce, the lady who first contacted me about the issue, said she has a very nice, very clean, 1999 Class A gas powered motorhome, and that now that she has been fulltiming for a couple of years, she realized I was right. (The world would be so much better off if everybody just accepted my word as gospel from the start.)

Joyce said that this past week was the first time she had ever been told she could not stay at an RV park, an upscale “resort” in Florida with the ten year rule. She said the young woman working behind the desk had multicolored hair, both of her arms were covered in tattoos, she had a tattoo on her neck, and several metal studs in her face. She was very polite and explained that while she was sure Joyce was a very nice lady and it was nothing personal and that her motorhome looked fine, they had to enforce the rule to keep out the “wrong kind of people, who would not fit our image or give people the wrong impression of the resort.” Joyce said she thanked the young woman for her time and left after assuring her that she definitely did not want to do anything that would hurt their image.

While Yuma, Arizona is popular with RV snowbirds, one drawback is the very hard water to be found there. In fact, it’s so bad that there are water stations like this all around town. 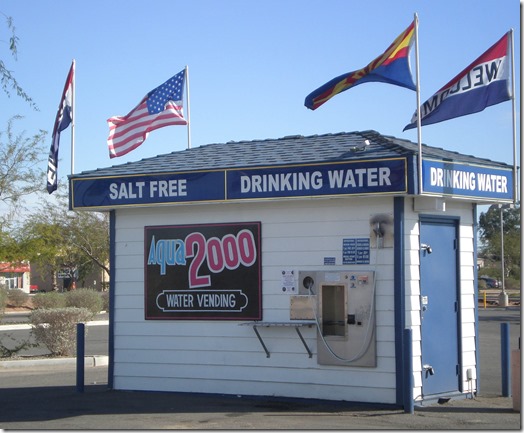 Before we went to Lake Havasu City for Winter Blast we filled our fresh water tank, since we would be dry camping. The water here at Santa Fe RV Park is much better, and I didn’t want to haul around that nasty Yuma stuff, so yesterday I turned off the campground water and used the Winnebago’s water pump to run the tank dry to get rid of it.

Before we leave here I’ll fill the tank again, even though we’re going back to Tucson and will have full hookups. We can carry the extra weight with no problem, and we’ve found ourselves unexpectedly stuck someplace waiting for repairs, or in a campground where the water was shut off for repairs more than once. It’s nice to be prepared.

It’s Wednesday, and that means it time for a new contest. We’re doing something different for this week’s Free Drawing. We’re giving away two audiobooks from my friend Carol Ann Newsome, A Shot in the Bark and Drool Baby

, from her popular Dog Park mystery series. All you have to do is click on the Free Drawing link and enter your name in the comments section at the bottom of that page (not this one). Only one entry per person per drawing please, and you must enter with your real name. To prevent spam or multiple entries, the names of cartoon or movie characters are not allowed. The winner will be drawn Sunday evening. 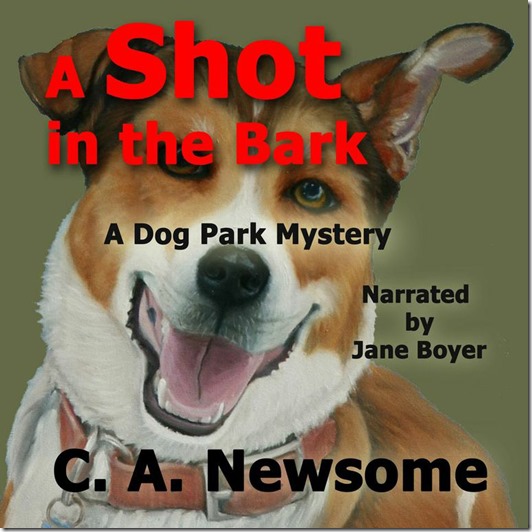 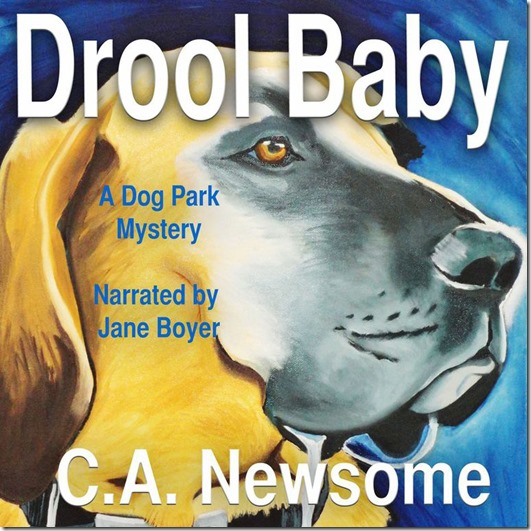 I wrote in Monday’s blog that I had sold 99 audiobooks so far this month, my best ever, and wondered if I would make 100. Indeed I did, as of last night I was at 106! Almost half of them have been for Dog’s Run, my mystery set in a small Ohio town in 1951. It’s got 65 reviews on Amazon so far and a very nice five star rating. I appreciate all of your support.

Thought For The Day – I don’t trip, I do random gravity checks.

4 Responses to “The Wrong Impression”