New and wannabe fulltimers sometimes worry that they will be all alone out here on the road, surrounded by strangers. And then they are surprised at how many friends they quickly make and how often they run into them over and over again all over the country. We’ve had several friends visit us since we’ve been here at the Seaside Leisure Time RV Resort.

On Sunday Susan Pezzano stopped in to say hello. We met Susan and her hubby Rod at the Hershey RV show a few years ago and they have been subscribers ever since. We saw them last winter at Three Flags Resort in Wildwood, Florida and look forward to seeing them again while we’re here.

Yesterday another friend came by, Dan Sheppard. We’ve know Dan and his wife Jenny for years, going way back to when we are all involved in teaching at Life on Wheels. Dan is a longtime instructor for the RV Driving School, and he suggested (with a grin) that we fire up the motorhome and drive over the Astoria bridge a few times to see if he could help me overcome my fear of bridges. No thank you, it’s my phobia and I’ve grown quite accustomed to it. I’ve already found a way to deal with it. Her name is Miss Terry.

Dan and Jenny asked if we wanted to go to dinner with them at Camp 18 Restaurant. Several of our readers had suggested this popular logging themed restaurant, so when Dan asked we quickly said yes.

In the 1920s and 30s, the large logging operations that worked this area all identified their camps with numbers. Since the restaurant and logging museum is located at milepost 18 on Highway 26 east of Seaside, the owners named it Camp 18. 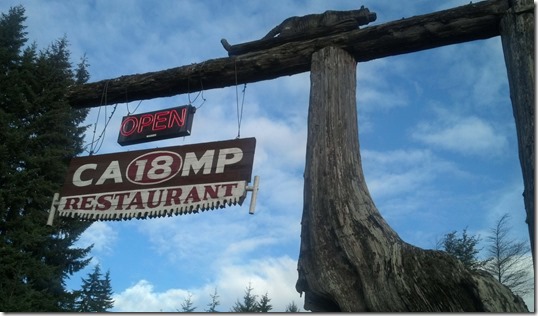 This place was amazing and I can see why it’s so popular. The grounds have all kinds of old logging equipment on display, from bulldozers to steam engines. 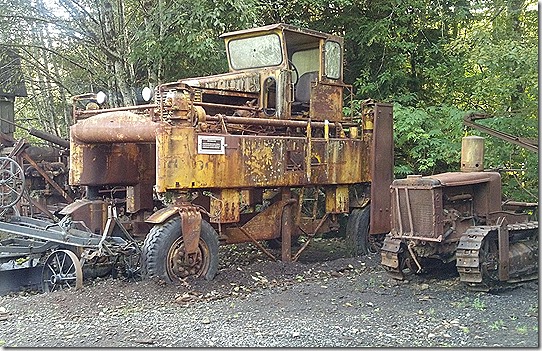 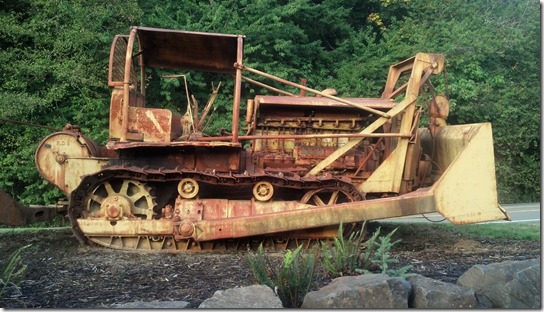 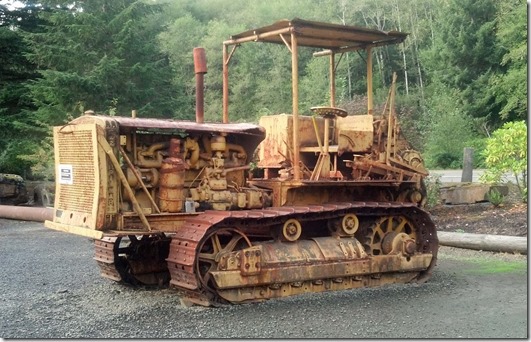 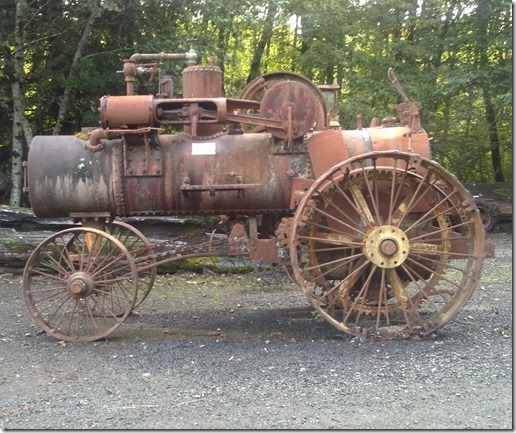 This old truck has obviously done a lot of hard work before being put out to pasture. 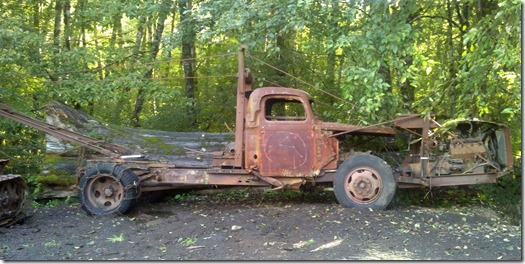 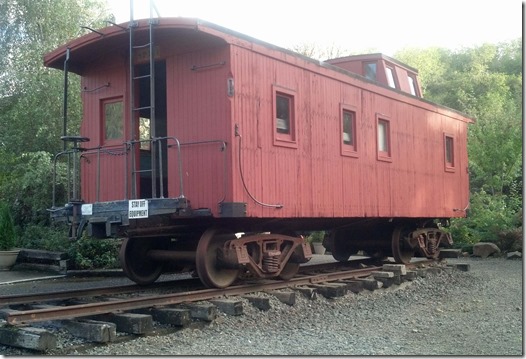 In the days before electrical utilities were available in rural Oregon, farmers took advantage of the region’s many rivers and streams to generate their own electricity. Homesteader Lee Wooden built this hydroelectric system using a waterwheel to power his farm, and it did a fine job of powering his electric stove, electric heater, and lighting from the time he built it in 1927 until power lines finally reached his property ten years later. 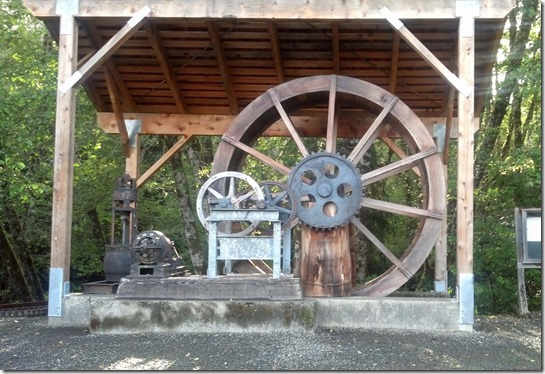 If you want to dine outside, you could seat a lot of people at this table! 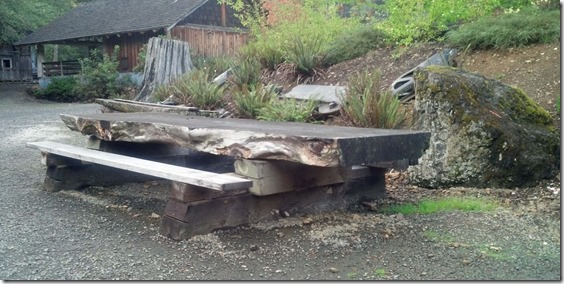 There is also a memorial to loggers who worked the Northwest woods over the years. 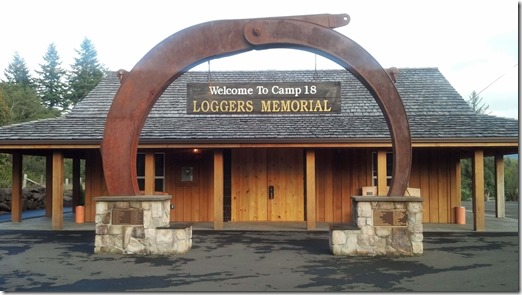 Here are Terry, Dan and Jenny in front of a huge old log. That’s a lot of wood! 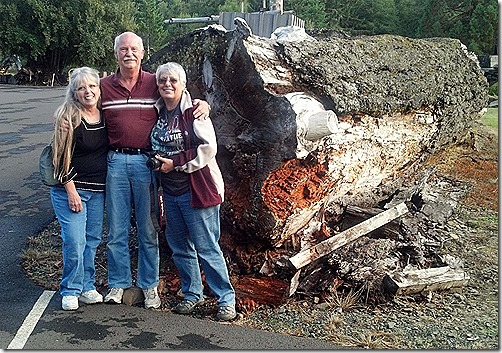 There were also a lot of chainsaw carvings outside the building, including old loggers and Bigfoot. 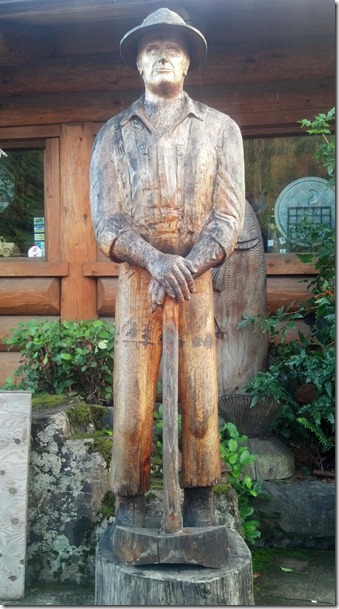 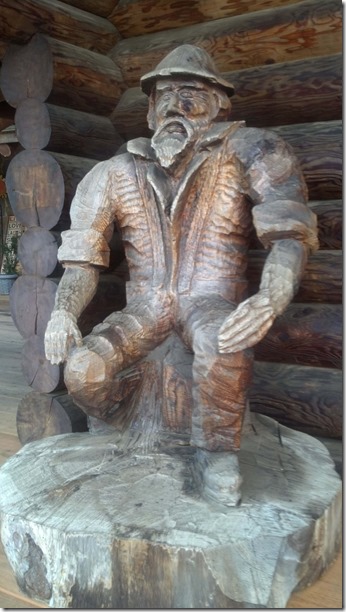 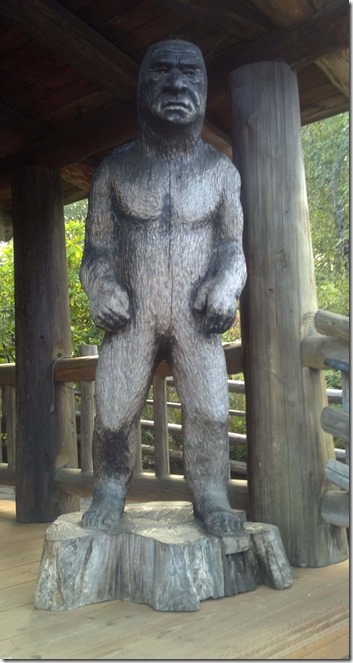 The restaurant was just as impressive inside as out, starting with the door handle, which was an old ax. 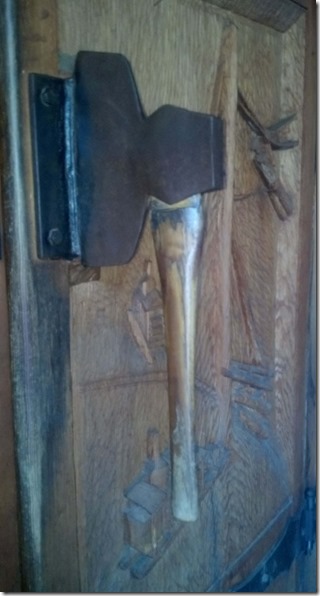 The 85 foot ridge pole in the main room is the largest such structural member known in the United States. When cut, it weighed approximately 25 tons, and has 5,600 board feet of lumber in it. Did I mention that there is a lot of wood around here? 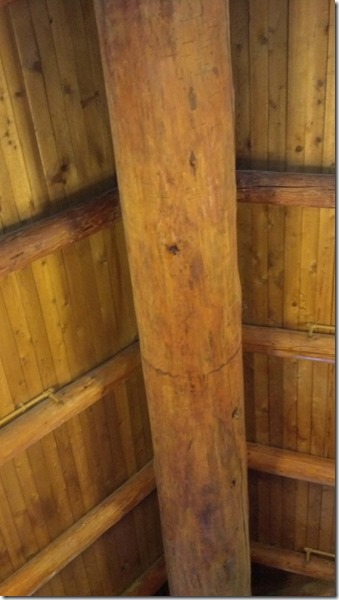 Dinner was excellent. Dan and I had steaks that were grilled to perfection, Terry had grilled salmon and said it was outstanding, and Jenny loved her creamy chicken marsala and said the clam chowder was some of the best she has found anywhere. We were all stuffed by the time the waitress cleared away our plates. This is another one I’ll be adding to our Favorite Restaurants guidebook!

Dan is a dedicated geocacher with over 5,500 caches found, and while we were there, we found the appropriately named Camp 18 Cache. I’m glad we found it before we ate, because afterward it was all we could do to waddle back out to their car!