It rained hard all night Tuesday night, but yesterday morning the clouds parted and we saw that most rare of sights along the Pacific Northwest coast; blue sky! Lots of blue sky. I could get used to that.

We spent most of the day checking out some of the shops in town, starting with a couple of used bookstores. Even though we have Kindle e-book readers, Terry and I are both addicted to bookstores and never miss an opportunity to check one out when we find it in our travels. Terry found a knitting and spinning magazine at one place, and then we poked around in a second hand store and a big antique mall, where she found a good deal on some knitting needles and a beautiful woven woolen throw.

When we got to town Tuesday, I spotted a shop called The Kite Company and I wanted to check it out. Keith Hansen, one of the owners, was a heck of a nice guy and he answered a lot of questions for us and gave me some pointers on flying dual line sport kites.

Our dear friends Butch and Jodie Spiller own a lot at Pacific Shores Motorcoach Resort here in Newport, and about 5:30 we drove over to their place for a visit. Their lot is on the upper level, with a breathtaking vista of the ocean and Yaquina Head Lighthouse. I could spend a whole summer there just drinking in the views. 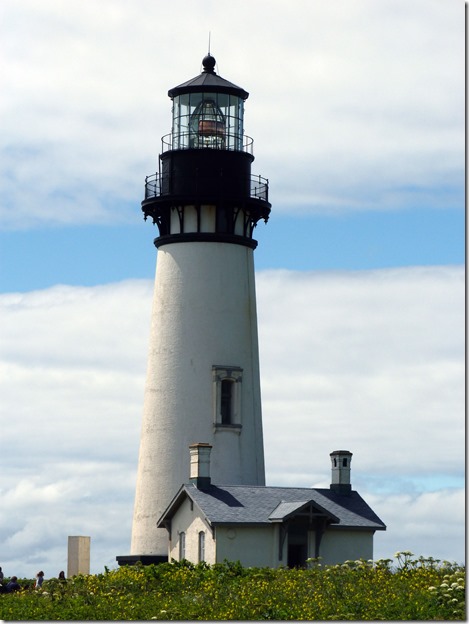 Butch is a gadget guy just like me, and he had a brand new toy to show us, his Pedego electric bicycle. All I can say is wow! You can pedal it like a regular bike or use the electric motor to zip you right along at 20 miles per hour, or you can use the adjustable pedal assist mode that does some or all of the work for you. 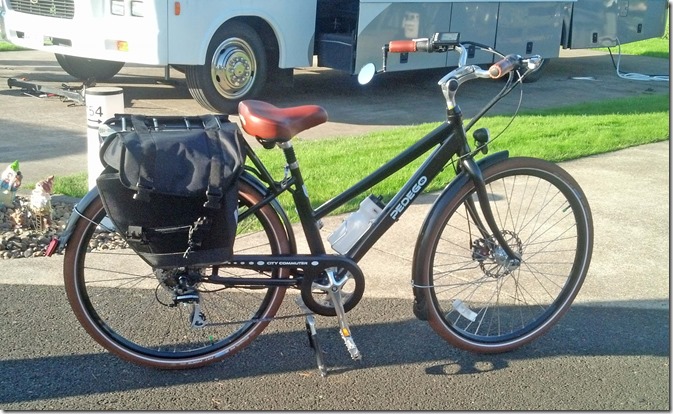 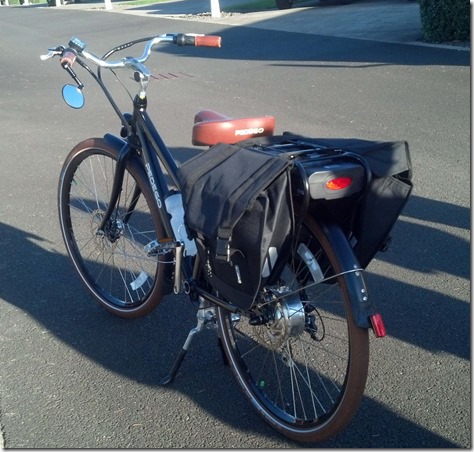 Butch asked Terry if she wanted to take the bike for a spin, and the words had hardly left his mouth and she was on that thing disappearing around the corner! She took it around the block and came back with a huge smile on her face. After her second run around the block, I wasn’t too sure if she was going to get off the bike or just keep on going until she hit Arizona and leave me to deal with it’s former owner all by myself.

A while back Butch and Jodie introduced their friends and neighbors Bob and Jeannie Emmert to the Gypsy Journal and they also became subscribers and blog readers. Bob is apparently a Mr. Fix-it like my pals Ron Speidel and Greg White so I went out of my way to be nice to him, even though Butch told me over and over that he was a jerk, because you never know when I’m going to break something. I’m not above letting a jerk fix my stuff when I need help.

Besides, rumor has it that Bob is also a kite flier, and I was hoping he’d offer to let me fly some of his kites. I’m also not above hanging out with a jerk if he has nice toys I can play with. And except for her taste in men, Jeannie seemed like a very sweet lady.

The six of us went to dinner at a nearby place called Szabo’s Steakhouse & Seafood, where they had all you can eat fried oysters. The food was great, the company was delightful (except for that jerk Bob), and Butch bought our dinner. What more could a guy ask for? (Well, yeah, to fly Bob’s kites, but not much else.)

We’ll see what the weather looks like today and let that determine what we end up doing.

Thought For The Day – Attitude makes the difference between an ordeal and an adventure.