Nick's Blog » Mooned By A Mannequin

Since we had less than 40 miles to travel yesterday, we were in no hurry to get going. We got up about 9 a.m., checked e-mail and did the rest of our normal morning routine, and finally pulled out of the Bremerton Elks lodge about 11. Since we needed to stop at the Kitsap County Fairgrounds about four miles away to dump our holding tanks, we waited to hook the Explorer to our tow bar until after we dumped.

As it turns out, I’m glad we didn’t. We had been there a couple of years ago, but I turned at the wrong corner and found myself entering a small, busy parking lot for the swimming pool, which was filled with cars and kids, with no easy way to get back out. Terry saw my predicament and managed to stop traffic long enough for me to get turned around and back out on the road.

Once dumped and with the toad hooked up, we had an easy run north to the Hood Canal along nice two lane roads with stunning views. 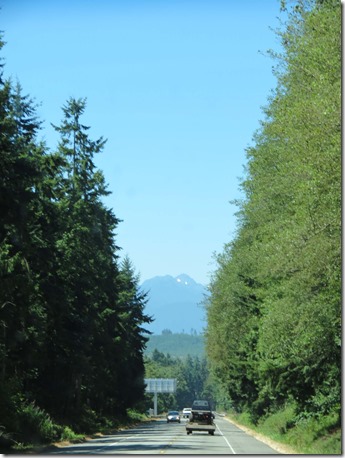 And I didn’t even snivel crossing the draw bridge over the canal because it’s fairly wide and not very high. 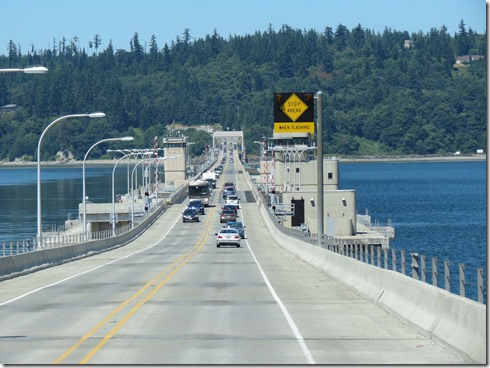 There was a bit of traffic, including a lot of RVs on the road, but we moved right along with no delays. 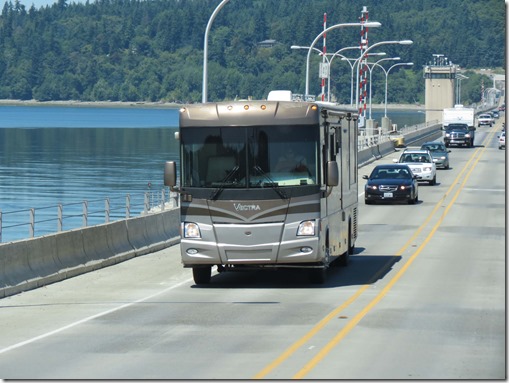 As always, Miss Terry was busy with her camera, and she got some very nice pictures. This is one of the most beautiful parts of the country, in our opinion. 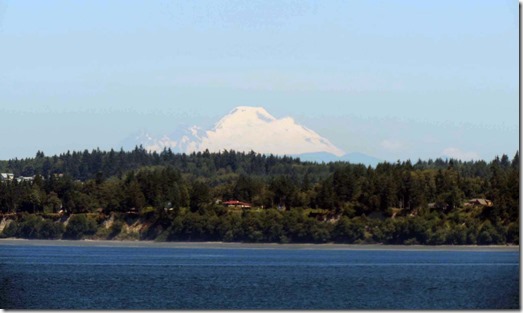 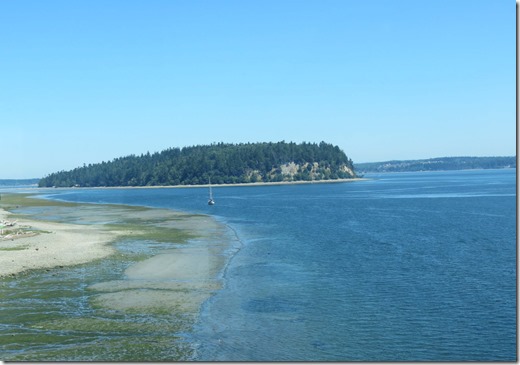 We arrived at the Escapees Evergreen Co-op in Chimacum, a few miles south of Port Townsend, and parked next to our old friends Art and Caroline Fennell at the entrance while we went in to register. Managers Connie and Dave Beckes greeted us and got us registered and we moved to our site and got settled in.

The last time we were here Terry discovered a very nice shop in Port Townsend called Diva Yarns and we drove into town to see if they were offering any spinning or weaving classes that she could take while we’re in the area. They didn’t, but a delightful young woman named Rebecca, who was working in the shop, showed Terry a knitting technique she was trying to learn. As we were chatting with Rebecca, we learned that her family had been fulltime RVers when she was a young girl. How cool is that? But as they say in those late night television commercials, wait, there’s more! Rebecca’s father is an artist who creates beautiful custom made spinning wheels that are both functional and works of art. Check out his website, Olympic Spinning Wheels. I think I know what Terry wants for Christmas!

Our next stop was another yarn shop a few blocks away called The Bazaar Girls, where I had an experience I’ve never had before. I got mooned by a mannequin! This is what greeted us on the sidewalk in front of the store. At first I thought it was a street person, and then when I realized that it wasn’t, I wasn’t sure if I was relieved or not. I mean really, mooned by a mannequin? Since I’m 60 going on 15, usually I’m the one doing the mooning. 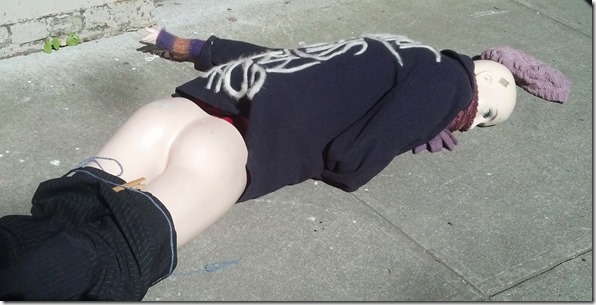 The two young women from the store tried to get the mannequin dressed and upright again, but the strong breeze wasn’t being too helpful and it kept falling right back down again. I told them that in my past, I had a lot of experience with drunk chicks if they needed any help, but they finally got things under control.

Better yet, they also offer classes in spinning and other fiber arts, and once the mannequin problem was resolved, the very nice lady who waited on us hooked Terry up for a private spinning lesson with one of her instructors for this weekend.

We wandered around town for a while, stopping in a few of the stores housed in the historic Victorian buildings along Water Street, and walked out on a pier to watch the boats passing by until a combination of the chilly breeze and hunger sent us back to the Explorer. 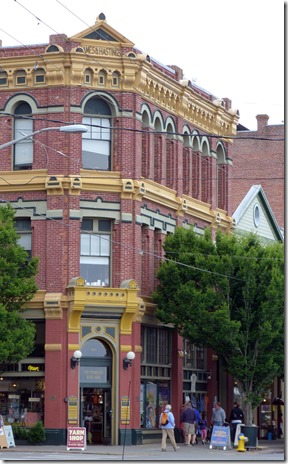 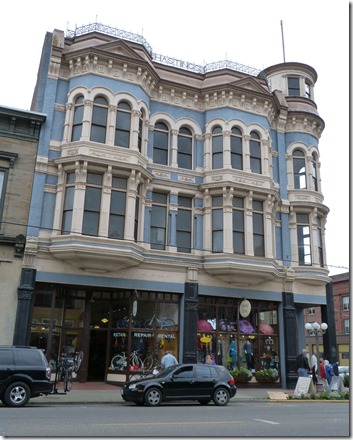 Several blog readers had recommended a restaurant called Scampi and Halibuts in nearby Port Hadlock and advised us to bring a big appetite. I’m glad we did, because the Admiral’s Feast was huge and included halibut, cod, four huge prawns, scallops and oysters. Add garlic parmesan waffle fries and there was no way I could finish it, as good as it was. Terry had the scallops and cod with chowder and said they were all delicious.

We don’t have any plans for the next few days except to play tourist a little bit and just relax here at home some of the time, too. I’ve got plenty of writing to keep me busy and Terry has some projects she wants to work on. We’re in laid back mode and we like it.

Thought For The Day – You can’t start the next chapter of your life until you stop re-reading the last one.

9 Responses to “Mooned By A Mannequin”