After reading yesterday’s blog I got e-mails and messages from four or five RVers who said they had inquired about staying at the campground here at the fairgrounds in Douglas, Wyoming and been told it was only open for special events. So I went up to the office to see what the official word is, since we had no trouble checking in when we arrived Wednesday afternoon.

And apparently the official word is, “Huh?” One person told me that they prefer people go to the local KOA, since they don’t want to compete with private business, but added that due to all of the energy workers in the area, the KOA is often full so they take in the overflow. Someone else said they welcome any RVers who want to stay, except for Fair Week, which is in August. At any rate, they have 400 full hookup sites and there may be fifteen RVs here, most of them long term rigs from people working in the energy industry. This area isn’t booming like North Dakota yet, but apparently a lot of locals think the boom is coming.

Back at the motorhome, I spent a couple of hours making copies of our 7-in-1 CD of Free Campgrounds, Casino Camping, RV Good Guys, etc. e-books. And guess what? My iMac is giving me the same problems it had the last three or four times I have taken it to Apple stores for repairs. The CD/DVD drive is sending me an error message and to go from one program to another, I have to shut down the first to open the second or the computer locks up. This thing is about to become a boat anchor. Once we get Escapade out of the way, I’m going to start working my way up the chain of command at Apple and not stop until I get to somebody who will replace this piece of crap.

The Wyoming Pioneer Memorial Museum is located here on the fairgrounds, and during the afternoon I went over to check it out. I was amazed! 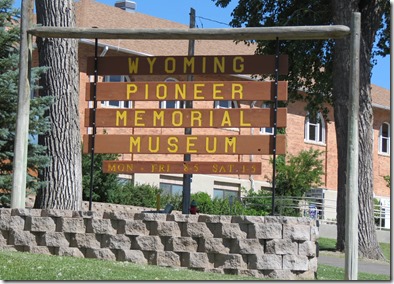 It doesn’t look like much from the outside, but inside they had an awesome collection of exhibits chronicling the history of Wyoming, from the Native Americans who first called the region home, to the mountain men, prospectors, cattlemen, settlers, outlaws, and everybody else who passed through or made their homes here. 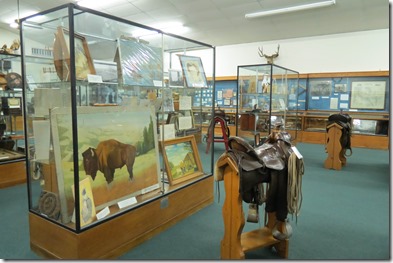 There was a nice collection of old guns, including this Colt Army Model .44 that a wagon man carried while hauling freight to nearby Fort Fetterman during the Indian wars (top), and this Colt .44-40 (bottom) that local rustler George Pike carried. Note that the barrel was cut off to make it easier to hide the gun in his pocket. 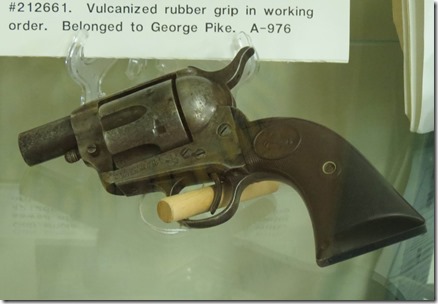 Local legend says that Pike died of a heart attack after winning a large hand in a poker game in a Douglas saloon. Since it is considered impolite to quit when ahead, the rest of the players propped the dead man up in a chair and a cowboy standing at the bar was drafted to play Pike’s hands. Even dead, his winning streak continued, and the story says that he won enough to pay for the handsome headstone that stands over his grave in the town cemetery.

The museum’s other displays include mammoth bones, Indian baskets, and the overalls of rodeo cowboy and railroad detective Charley Irwin, who weighed 500 pounds when he died, in 1934. Among his many friends were Will Rogers, Buffalo Bill Cody, President Theodore Roosevelt, and outlaw Tom Horn. 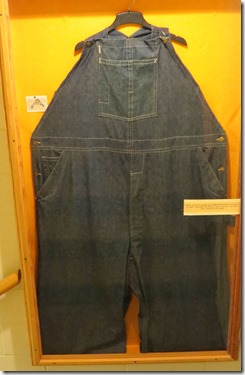 All of that playing tourist wears a man out, so back at home I took a nap and let Bad Nick have the computer to do his thing, posting a new Bad Nick blog titled We’re Still Married. Check it out and leave a comment.

This morning we’ll say goodbye to Douglas and head for Gillette so we can get parked for Escapade. We’re really looking forward to seeing all of our Escapee friends, and I hope lots of them stop by our vendor booth or come to my seminar on Highway History and Back Road Mystery.

Thought For The Day – Preconceived notions are the locks on the door to wisdom. – Merry Browne

3 Responses to “Gillette, Here We Come!”