Happy Easter, everybody. I hope you have a wonderful day celebrating in whichever way you choose.

Hopefully it will be a laid back day for us, because the last couple have been pretty busy and I could use it.

Yesterday we had a family dinner at Terry’s sister Lisa’s house, and Terry, her sisters, and her mom were busy for two days ahead of time planning, cooking, and arranging schedules to make sure everybody and the food were all on time. I teased them by saying that in 1965 the 1st Cavalry Division transported 10,000 men, their weapons, helicopters, vehicles and other equipment with less planning than this dinner was taking. For some reason they failed to see the humor in that. But whatever they did, it all worked out fine, because dinner was delicious and the company was wonderful.

Terry is never happier than when she’s in a kitchen, as this picture shows. All of the ladies in the family are great cooks, but they defer to Terry when it’s time to start slinging hash. Or in this case, fried chicken, potato salad, coleslaw, deviled eggs, cake, and brownies.

Brother-in-law Jim, myself, and Pete, Terry’s dad, just stayed out of the way, which was the best way we could contribute. So we sat around and solved most of the problems of the world. We had pretty much conquered the national debt and the plight of the endangered walking butterfly, and were getting close to solving the eternal debate over whether zebras have black or white stripes when we were called to the table.

Pete spent over 20 years in the Air Force, as a flight line crew chief on heavy bombers with the Strategic Air Command, as well as flying into the middle of hurricanes, among other interesting duties and we enjoyed hearing about some of his adventures. 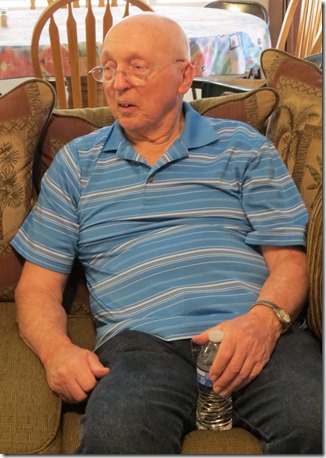 While all of the dinner planning and preparation was going on the last two days, I spent most of it at my desk. It was a lot more work than I expected, but I finally have 10 years of back issues of the Gypsy Journal (2003 – 2012) available to purchase and download online. Now that I have that done, it’s time to start working on the next issue of the Gypsy Journal. I don’t have time to get bored!

Today Greg and Jan are supposed to move up to Apache Junction from Tucson, where they’ve been hanging out for the last two weeks. We’re sure looking forward to seeing them and showing them around a little bit.

It’s warming up here pretty quickly, and we still have to get down to Tucson ourselves for medical appointments, me with the VA hospital and Terry with her doctor. But we have held off scheduling anything until we know what’s going on with her dad. Hopefully after Pete’s appointment with the surgeon Monday, we’ll have a better handle on things.

Thought For The Day – One should never generalize.