I’m bugged. Really bugged. Back in early October, when we were in Pennsylvania at the Hershey Thousand Trails preserve, we were invaded by stinkbugs. They were everywhere, and it was impossible to keep them out of our motorhome. They seemed to hide in every nook and cranny of our Winnebago, and just about the time we think we’ve eradicated them all, another one comes crawling out. I can’t count the number of them we have killed in the last three months. Yesterday alone, we must have dispatched five or six of the little devils.

Now, here at Three Flags in Wildwood, Florida, we’ve got Japanese beetles. If you are not familiar with Japanese beetles, they look like ladybugs, but there’s noting ladylike about them. Every time we open our door there are half a dozen clinging to it, ready to sneak inside. I’d let them in if I thought they ate stinkbugs! At least I’d have something new to kill!

We were pleasantly surprised that the rains predicted for yesterday didn’t develop until sometime in the late evening, and then it was just a brief shower or two. But it was cool and heavily overcast all day and we didn’t venture out. Miss Terry was busy doing some cleaning and organizing, but still found time to make some delicious garlic bread knots, and later on she made some potato skins stuffed with cheddar cheese and bacon. Both were delicious.

Terry also put together some orders that came in over the weekend and they will go out in today’s mail.

For my part, I cranked out another 3,000 words or so on my new Big Lake book and went back and changed some things that had been bothering me in one chapter that I wrote last week. It seemed to make the whole story flow much better.

A lot of you have been asking how soon the book will be out, and all I can say is that I’m working hard on it. I know some authors who say they can grind out a book every six weeks or so, but I just can’t. Hopefully this one will be worth the wait once it is finished.

In the meantime, my friend Dale Roberts’ new thriller Separate Lives came out yesterday on Amazon. This is the second book in his Tyson Palmer series and I got a sneak peak ahead of publication. It’s good! Check it out. 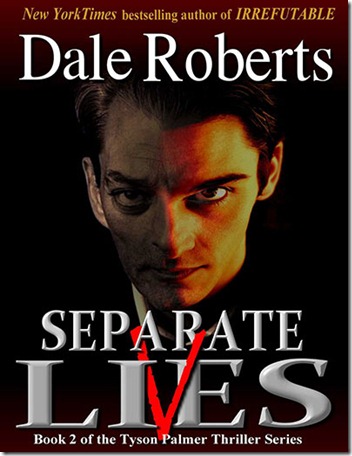 Dale is the fellow who created the covers for the previous three Big Lake books and he’s got a few little tweaks to do on the cover of the new book, then I’ll let you all see it.

I’m not sure what’s on the schedule today. Terry is waiting for confirmation on a dental appointment, so we may be running over to the Orlando area for that. If not, I’m sure we can find some mischief to get into. We always do.

Thought For The Day – I’d rather have honest enemies than fake friends.

5 Responses to “What’s Bugging Me”