Nick's Blog » I Love My Spartan

I got an e-mail from somebody yesterday that brought to mind something my friend Al Hesselbart, the historian for the RV Museum in Elkhart, Indiana, has mentioned before. The lady who contacted me said that they were considering a Thousand Trails campground membership, and were concerned because their Prevost bus conversion was an all electric coach. They wondered if they would have sufficient electric at Thousand Trails to power their Prevost. She also said that they had a Passport America membership, but dropped it after a year because they couldn’t find enough campgrounds that could accommodate their Prevost.

Notice that she mentioned their Prevost three times? It’s actually a Marathon Coach conversion of a Prevost bus shell. Al has often said that he’s never heard anybody who owns a Winnebago, Newmar, Monaco, or anything else talk about driving their Spartan, or Freightliner, or whoever made the chassis. The flip side of the coin is that I have never heard anyone who has a Marathon, Liberty, Parliament, or any of the other bus conversions based upon a Prevost shell call their coach anything but a Prevost. I guess it’s a Prevost thing.

Speaking of Spartan chassis, if you are going to be at the Florida RV Supershow in Tampa January16-20, Spartan is having a ride and drive event. You can schedule a test drive by stopping by the Spartan Chassis booth (#560) at the show and asking an associate to schedule a test drive. You can also fill out a form on Spartan’s Facebook page to get your time slot.

After I mentioned paddling our kayaks with the manatee at Crystal River last year, somebody asked me if I wasn’t afraid of falling out or being upset by one of the huge creatures. I’ll admit that the first time one of them swam under my kayak I got nervous, but they are incredibly gentle animals and it didn’t take me long to get comfortable with them.

My clumsiness is well known, and I fell out of my hard kayak several times, especially when getting in and out. I provided my pal Ron Speidel with an afternoon of laughs on the Saint Joseph River in Elkhart, Indiana a few years back doing so. But my Sea Eagle PaddleSki 435  inflatable is incredibly stable, even for somebody as ungainly as me. I’d have to work really hard to fall out of it, and have never come close in lakes and rivers from Michigan to Florida and everywhere in between. Even when power boats or jet skis have gone past and thrown up wakes, it just sits there in the water and rides them out comfortably. It’s pretty much foolproof, even for this fool. 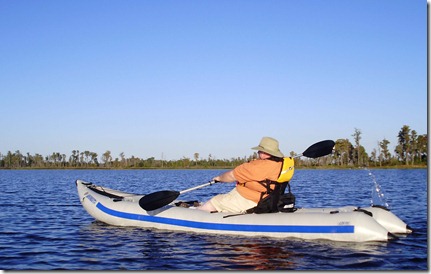 My Facebook authors group is featuring two of our members this weekend, Brandon Hale, whose Day Soldiers series is about a legion of vampires and werewolves that declare war on the human race. Kind of like Congress and the Senate, I think. Besides being a good writer, Brandon is a nice guy who goes out of his way to help other authors succeed at their craft.

Our other featured author this weekend is Brian Dockins. Betrayal of Magic is the first book in Brian’s young adult fantasy/paranormal Department of Magic Book Series, which has earned excellent reviews.

Somebody needs a history lesson. On ABC World News last night, in a story about a soldier who was named to receive the Medal of Honor, Diane Sawyer said it was only the fourth time the nation’s highest military honor would be awarded to a living person. Since I have known two recipients of the Medal of Honor personally, imagine the odds of that. It’s good to know the national media always gets the story right.

Thought For The Day – We sleep soundly in our beds because rough men stand ready in the night to visit violence on those who would do us harm.

4 Responses to “I Love My Spartan”