Since we only had 27 miles to drive yesterday morning, we were in no hurry to get on the road. This new relaxed lifestyle is really going work to out well, if I can keep a rein on my Type A personality that always thinks I need to be doing something every waking moment.

Terry and I really liked Jolly Roger Travel Park on Marathon Key. Debbie, the manager, told us that the place started out as a fish camp that has morphed into a comfortable, laid-back RV park over the years. Their sites are not huge, but our 40 foot motorhome had no problem on one of the interior Passport America  sites. They have some long-term sites that people rent by the season, and Passport America members are welcome year-round for a maximum of five nights stay on a space available basis. 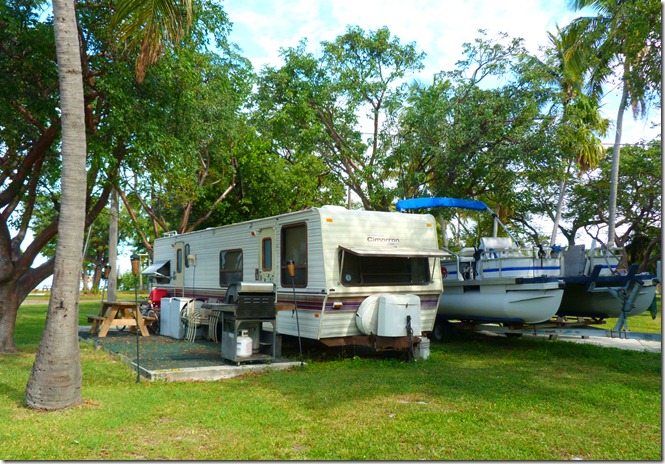 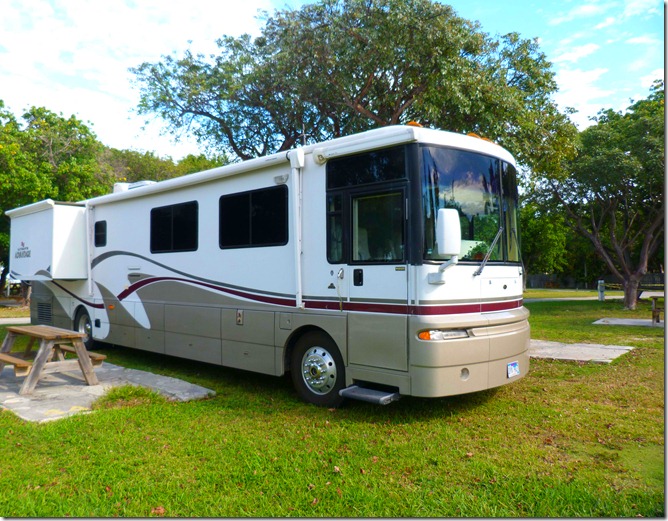 Their waterfront sites have a great view and go at a premium price, obviously. 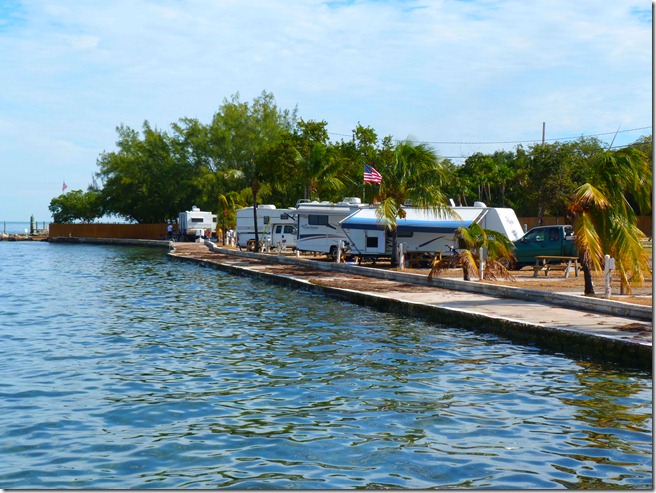 Fortunately, they don’t park RVs under these big palm trees. It’s bad enough to have acorns falling on your roof, could you imagine one of these coconuts coming down? And they do come down! There was one laying under one of the trees. 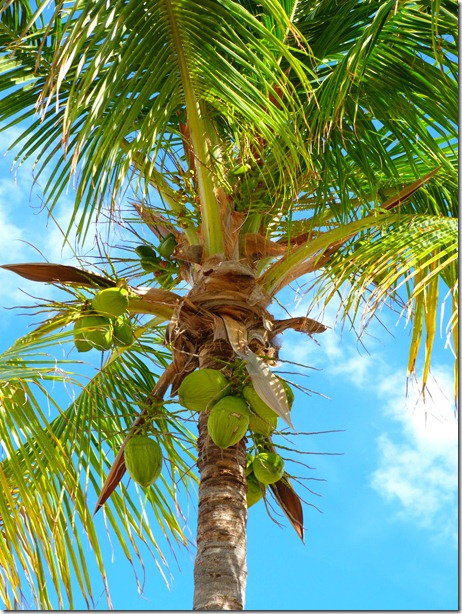 Terry and I walked down by the water to check out the fishing/swimming pier, and I stopped to admire this beautiful Mako center console fishing boat. If we lived in Florida, I’d have one of these babies! 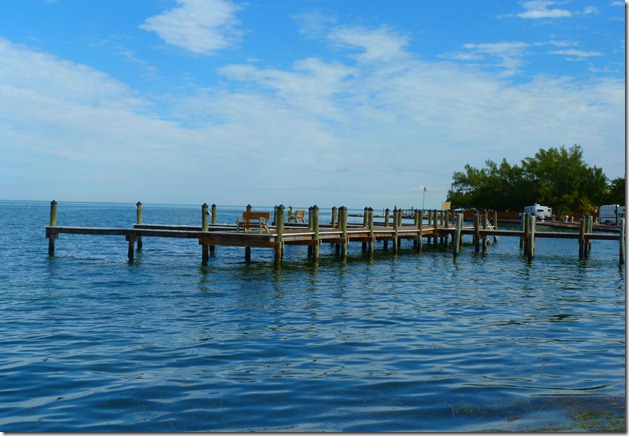 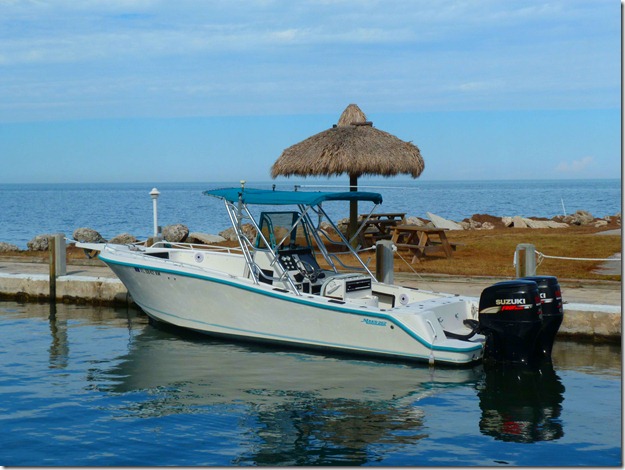 I’d love to come down here and sit in the shade and read my Kindle and just soak in the salty air and the feel of the islands. 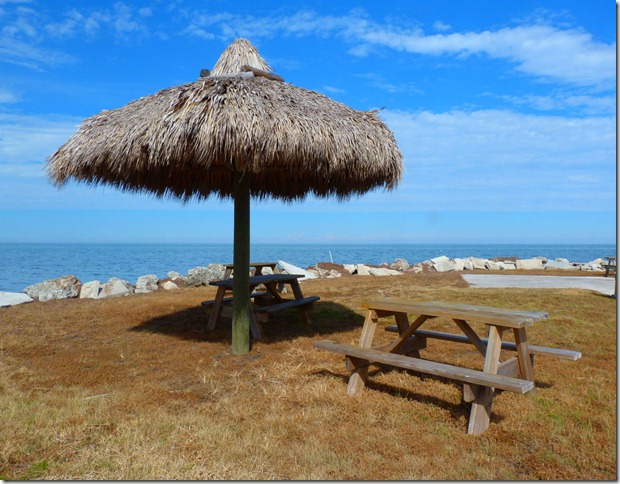 We left about 11:30 AM with Terry at the wheel because I was being a wimp and didn’t want to drive over the Seven Mile Bridge. But to my credit, I didn’t snivel!

We have two weeks reserved at Sunshine Key RV Resort and Marina, which is an Encore park. Their regular rates are much more than our budget can afford, but with our recent Thousand Trails upgrade it’s only costing us $23 a night. For the Florida Keys, that’s a steal!

The regular RV sites are a bit tight, and it was a challenge getting into ours even though it was a pull-through. In fact I managed to put about a four inch scrape in the paint on one of our bay doors navigating a tight turn to get to the site. Hope I can buff it out. 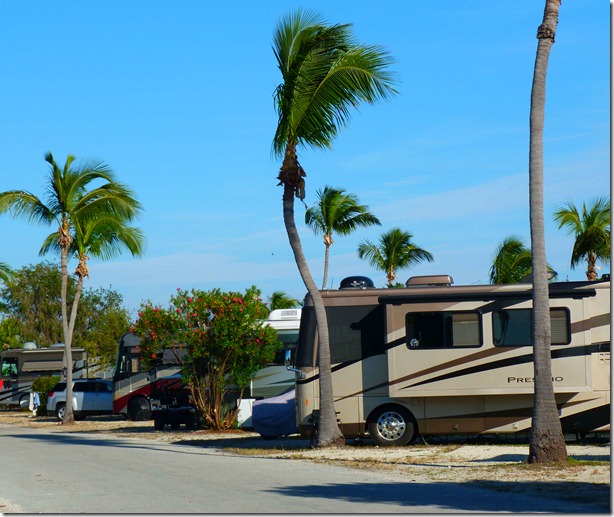 They have waterfront sites here too, which are very nice. 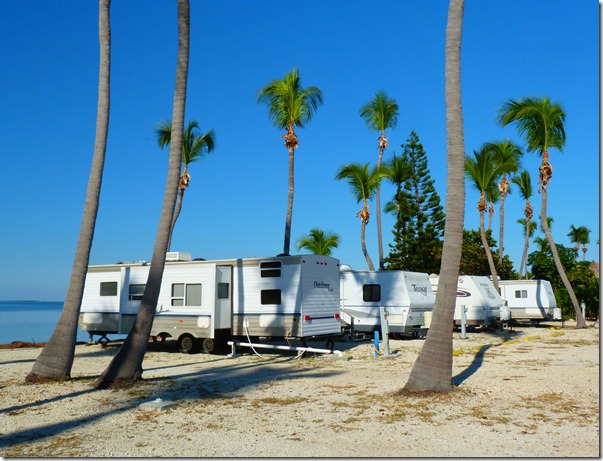 But I do have to say that both Terry and I agree that we like Jolly Roger better. This place advertises that it has a pier, but it’s in poor shape and is closed. And it just doesn’t have the same atmosphere. It’s run by a corporation and just doesn’t feel warm and fuzzy like Jolly Roger did. But again, $23 a night is a steal in the Keys!

Several people had recommended the white pizza at the No Name Pub, which has been a Keys landmark since 1935. It’s located a couple of miles off the highway on Big Pine Key. They told me it wasn’t easy to get to, but it was well worth the trip. 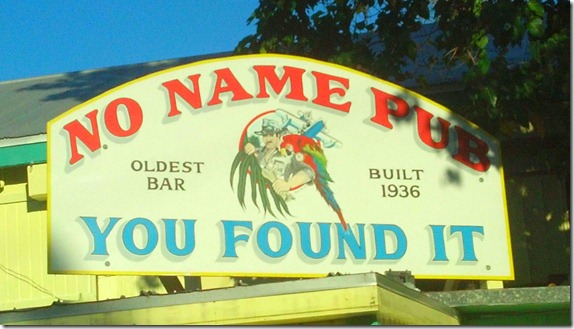 The place started out as a general store, then became a brothel, then a bait shop, and today it’s a bar and restaurant that can only be called a dive. But as dives go, it’s a good one. It’s a tradition for customers to sign dollar bills and stick them on the walls, and the place is covered with them. There’s not an inch of bare wall or ceiling showing, just dollar bills. Lots of dollar bills. Over 70,000 of them, according to our waitress. 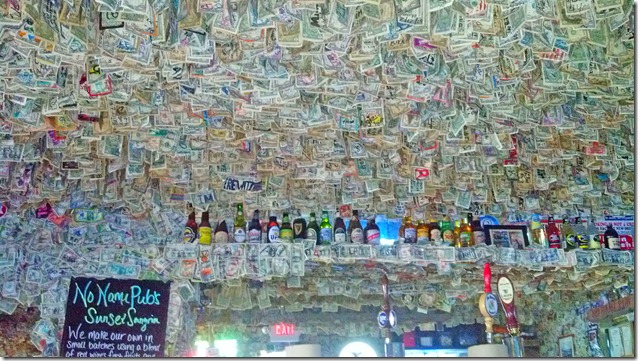 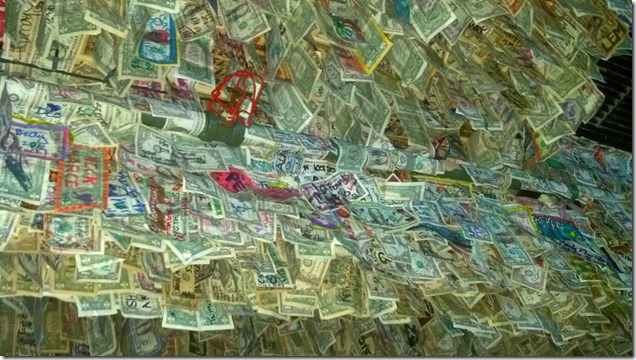 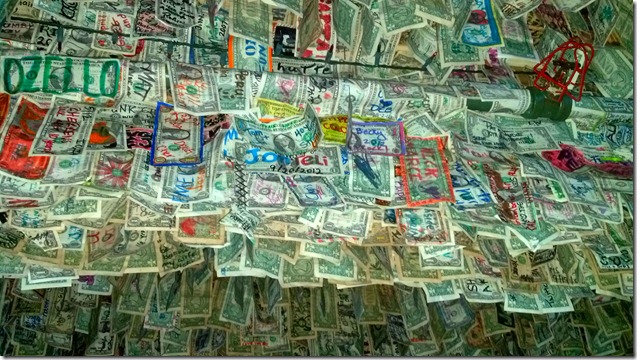 The pizza was fantastic! Well worth the trip. And Terry said the salsa that came with her chips was awesome too.

There is a lot to see and do here, but today we plan to just hang out here at home. I’m learning folks, I’m learning.

Thought For The Day – You never really realize what you have until it’s gone. Toilet paper is a good example.

7 Responses to “Settled In On Big Pine Key”