Nick's Blog » Who Shut Off The Water?

When we woke up yesterday morning, we discovered that the water in the campground had been turned off. I called the office and the lady I spoke to said it would be back on sometime in the afternoon. No problem, that’s why we always keep our fresh water tank at least half full. I turned on the water pump and we were good to go.

And early in the afternoon the water was back on as promised. Unfortunately, the pressure wasn’t any better than it has been since we arrived on Monday. It’s enough to live with, but not nearly as good as it was back at the Hershey Thousand Trails.

I spent most of the day writing, and just about finished the first draft of the prologue for my new Big Lake mystery. I’d like to have it out by Christmas.

In the meantime, if you are looking for something to read, my old friend Sharlene "Charlie" Minshall has a new novel out in Amazon’s Kindle bookstore titled Winter in the Wilderness. Check it out and download a copy. If you don’t know her, Charlie is the author of half a dozen books telling the stories of her adventures over 20 years of solo fulltime RVing, including In Pursuit of a Dream, Freedom Unlimited, RVing Adventures with the Silver Gypsy, and the newly updated RVing Alaska and Canada, to name just a few. Back when Terry and I were dreaming of escaping our hectic workaholic lifestyle and preparing to become fulltime RVers, we read all of Charlie’s books, and she helped convince us that we too could make it happen.

At 3 PM, Greg and I drove into town to mail some stuff at the post office. While I was there, I asked about getting some General Delivery mail sent in, and the lady at the counter said if we were going to be here for very long we needed to get a post office box. I told her we were just passing through and she gave me a card to fill out, an Application For General Delivery Mail, and said once it was approved we could get mail one time. I asked her how long it took to get approved and she said it was whenever the postmaster approved it. The form didn’t look like a regular postal form, and I’m pretty sure it was just their way of discouraging General Delivery customers. Most post offices in small towns are easy to work with, but in our fourteen years as fulltime RVers, we’ve run into a handful like this that, for whatever reason, give us grief. No problem, we’ll just wait to get our mail at our next stop.

We have seen some good reviews for a sandwich shop called Fat Freda’s in Colonial Beach, so we decided to give it a try for supper. It was a small, friendly place, where everybody seems to know everybody, and by the time we finished eating we had talked to all of the staff and most customers.

We never met Freda, but the “Fat” in the name of the restaurant is because they are known for their huge sandwiches. Terry’s crab cake sandwich was delicious, loaded with at least a quarter pound of pure fresh crab and not a bit of filler. I had the fried halibut sandwich and it was good, but nothing to get excited about. 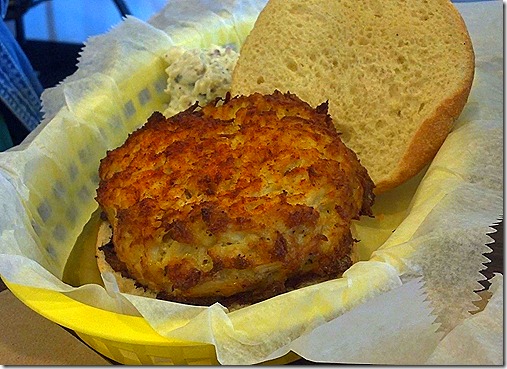 Greg’s huge burger had three buns, a couple of patties, sliced ham, bacon, cheese, and veggies. Greg pulled off the top bun and said he was looking for the kitchen sink, because it had everything else! There was no way he could get it into his mouth, so he had to eat it with a knife and fork. Jan said her chicken salad sandwich was also excellent. My only complaint was the French fries, which were a bit overcooked, but had a good taste to them. 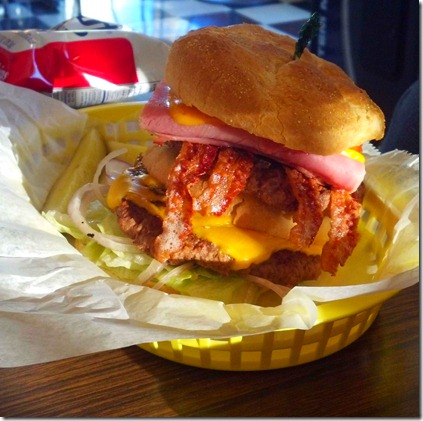 Yes, I know we eat out a lot, but it’s research. After all, how else can we come up with all those great places for you to try that are listed in our Favorite Restaurants guide, which is also part of our 7-in1 E-book. It’s a rough job, but somebody’s got to do it!

4 Responses to “Who Shut Off The Water?”