We pulled out of Harbor View Outdoor World Resort in Colonial Beach, Virginia a little after 9 AM yesterday morning and pointed the nose of our Winnebago southbound. The campground was closing for the season and it’s time to be someplace else.

We had an easy 337 mile run down Interstate 95, skirting around the east side of Richmond on Interstate 295 and crossing a very high bridge over the James River in the process. But since it was three lanes wide in each direction and I stayed in the center lane, sniveling was kept to a minimum.

Two rest area stops later we had crossed North Carolina and were closing in on South Carolina. Along the way, we had seen numerous billboards for a major tourist trap called South of the Border, which is located, appropriately enough, right across the state line. Think Wall Drug with a South Carolina Mexican accent. Yeah, I know it’s tacky, but I’m a tacky kind of guy. I wanted to check it out. 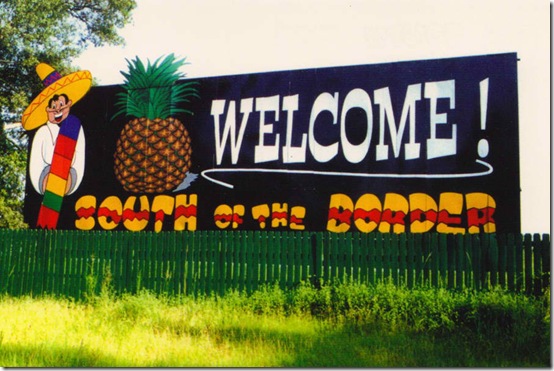 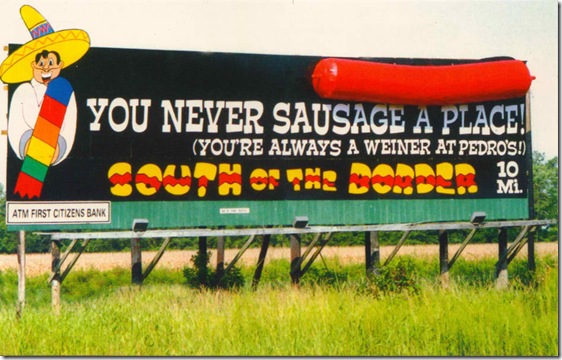 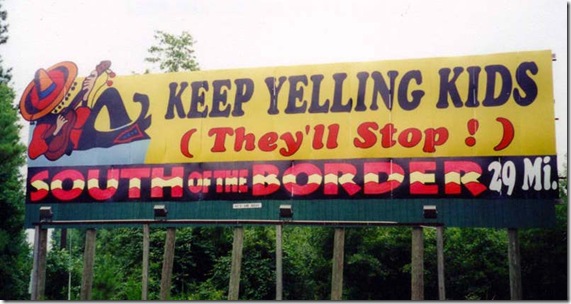 But first we wanted to get off the road and settled in, so we drove four or five more miles to Dillon, where we pulled into Bass Lake RV Campground, a very clean, very friendly Passport America affiliate. $17.50 got us a level pull through 50 amp full hookup RV site on grass. And the Verizon internet signal was strong and fast! The owners are British, and very nice people who made us feel welcome. 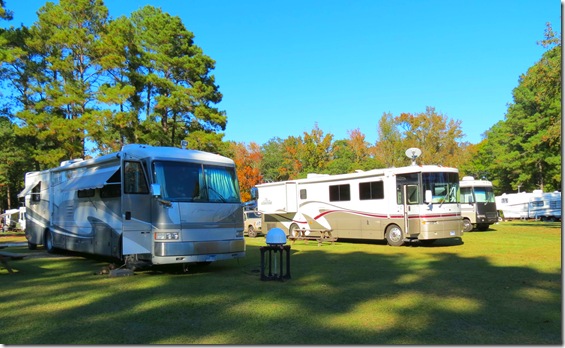 The wife was reading an Amazon Kindle and Greg, always happy to shill for me, told her about my Big Lake mystery novels. She immediately downloaded the first in the series.

Since we had a full tank of freshwater and I had dumped our holding tanks before we left Harbor View, and we were just there for the night, all I did was plug into the electricity.

After we were hooked up and had a while to get settled in and to check our e-mail, we all piled into our Explorer and drove back to South of the Border. Starting as a simple beer stand back in 1949, the place has grown into a major complex that includes gift shops, several restaurants, a motel, RV park, reptile lagoon, and kiddie carnival complete with Ferris wheel.

The place’s mascot, 97-foot Pedro, has four miles of wiring and weighs 77 tons. 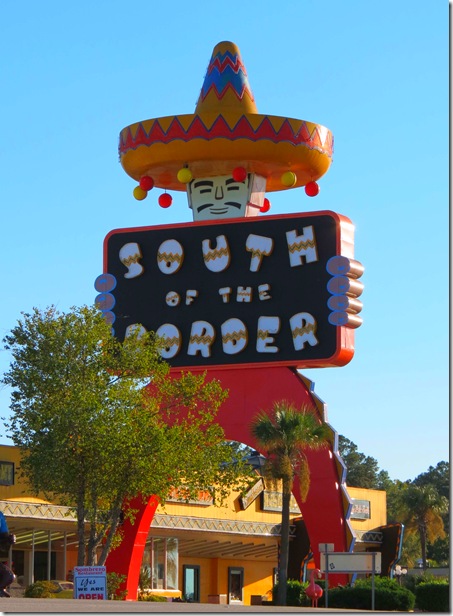 The 200+ foot high Sombrero Observation Tower has a glass elevator that gives riders a great view of the complex and the surrounding countryside. 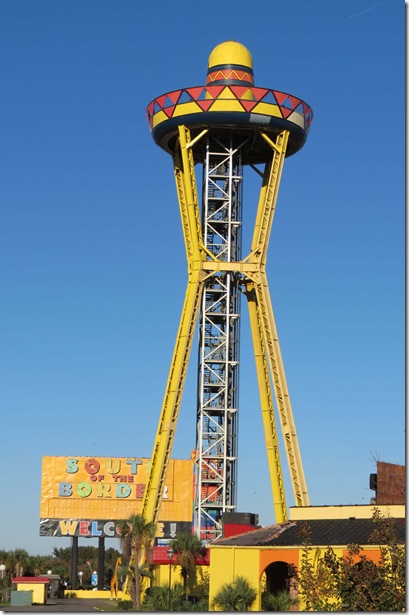 Greg had read some good reviews on the Peddler Steak House, so we decided to give it a try. We were a little concerned because the only other customers were a couple at a nearby table and the prices were higher than we expected, but Greg and I agreed that our ribeyes were among the best we’ve had anywhere. Terry had a salmon fillet and loved it, and Jan ordered mahi mahi and was very happy with her choice. This one definitely goes into our Favorite Restaurants guide!

Back home, we spent the evening watching TV and cruising the internet, which was a pleasure with the fast speeds we were enjoying. It’s been a long time since we’ve had such great service!

Today we will drive another 185 miles or so to Hardeeville, just across the river from Savannah, Georgia, to another nice Passport America park, Hardeeville RV. We stayed there a couple of nights last year and liked it, and it is a great base for exploring Savannah. We’ll be there a week or so, and then it’s on to Florida for the next three or four months. It’s good to be back on the road!