How can it be October already? Where the heck did the summer go? I want a do-over!

My parents always used to say that the older you get, the faster time goes. I never understood that when I was a kid, but I sure do now! Sometimes I want to just stop time, or at least slow it down for a while so I can savor everything around me. I remember once when I was pretty young, noticing my dad just sitting and looking at my sister and me playing on the floor. I asked him what he was doing, and he said “Just making memories, son. Just making memories.”

That didn’t make much sense to me then, but it does now. Sometimes Miss Terry will be busy doing something in the kitchen, or maybe reading or crocheting, and she’ll find me looking at her and ask if I need something. I tell her no, I’m just making memories. Just drinking in all of the good times to savor forever.

Yesterday was a repeat of the last few days. I knocked out several more pages of the new issue, stopping only long enough to go to dinner with Greg and Jan at a restaurant Greg found online in nearby Palmyra, named Funck’s. Greg said they had a lot of good reviews and wanted to check it out. The reviews were right; our meals were very good and Funck’s got added to our Favorite Restaurants guide.

While I was working on the Gypsy Journal, Terry was busy making some of her famous cinnamon rolls. These aren’t some quickie prepared mix that you whip out in a few minutes. No sir, making her cinnamon rolls is an all day process for Terry.

Back at the campground, we had some of the cinnamon rolls fresh out of the oven for dessert, and they were incredibly delicious. I think Greg follows me around and puts up with fixing all of the things I break just because of Terry’s cooking and baking. And who can blame him? 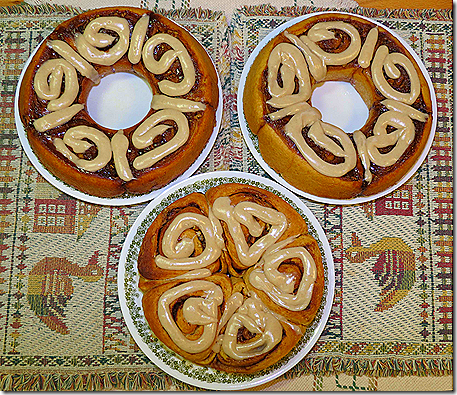 After we finished our dessert, we sat around visiting for a while, and then Greg and Jan went back to their motorhome and I went back to work. I think this is going to be a very good issue. We covered a lot of ground and collected so many stories that I can’t get them all in it. But that means I’ll have enough left over to fill up another issue when we’re sitting still this winter. 🙂

Thought For The Day – Today will never come again. Don’t waste it.