Yesterday morning was another early one, with Terry up by 5 AM and me by 7 for the last morning coffee and doughnuts and lots of hugs as all the rally attendees made ready to hit the road. RVers never say goodbye, just “see you down the road,” because we know that we will meet up again somewhere in our travels.

Bad weather was forecast so a lot of folks were eager to get on the road. By 11 AM, most of them had pulled out and a hard-working crew of volunteers had hung around to help Terry get all the tables and chairs stacked in the Junior Fair Building, the floor swept, and everything put away.

While a lot of people left, a few stayed put. Some wanted to avoid getting out on the road in the predicted strong thunderstorms, and others were like us and just wanted to have a day or two to relax after the busy rally week.

As for Terry and I, relaxing will be mixed with after-rally paperwork and getting things packed away in our motorhome’s storage bays. The first round of storms came through a little after 2 PM, it was fast moving and gone in no time, with no significant rainfall.

Several people came by to wish us well, and when the last of them left about 3:30 PM, I went to the fairground office to settle our bill from the rally. Many thousands of dollars lighter, that chore was out-of-the-way. Hey, we had some big bucks for a little while!

Then Greg and Jan rode with us to CJ Highmarks, where a group of 24 friends held a dinner to honor us and commemorate the end of our career as rally hosts. It was very nice and we both felt honored and loved. Thanks everybody, for making us feel so very special. 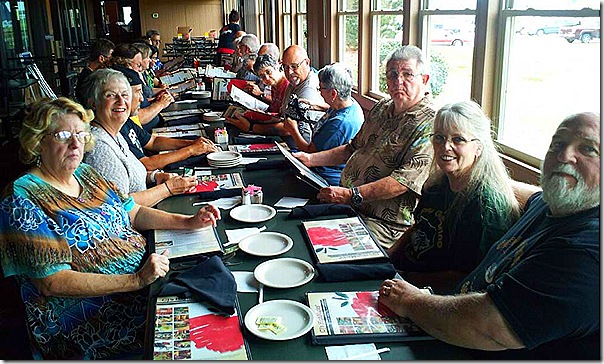 Back at the fairgrounds, Jean Damon gave Terry a wonderful massage, then I was next. What luxury as she worked all of the kinks out of our tired and aching muscles! Thanks Jean, we really needed that! Jean will be at the Escapade in Sedalia, Missouri, so if you want a real treat, schedule a massage with her while you’re there. You’ll love it.

While I was getting my massage, it started raining again, and a much stronger, slower moving storm hit with lots of rain, thunder, and lightning. At least it waited until the rally was over. That’s a first for us!

Just as RVers never say goodbye, this isn’t goodbye for us either. We will still be publishing the Gypsy Journal, traveling, blogging, and writing books. We feel very good about our rally experience. We set out several years ago to create something that was a hybrid between the fun and informality of a small Escapee’s-type rally and the educational opportunities of the now-defunct Life on Wheels. We know that we succeeded in that, and the many positive comments we received from rally attendees let us know that we were filling their needs.

Now it’s time to move on, or actually maybe I should say it’s time get back to the reasons we started fulltiming in the first place. We are not retiring, but we want a slower-paced lifestyle. We had it for a while when we first hit the road.. But then we got involved in teaching at Life on Wheels and following their crazy schedule and never seemed to have time to just relax and enjoy life. When Life on Wheels ended we started hosting our own rallies, and pretty soon we were just as busy all over again. It may take Miss Terry slapping me upside the head now and then if I come up with some harebrained scheme that would get us sidetracked once again, but she assures me she is more than up to the job!

Thought For The Day – When ideas fail, words come in very handy – Goethe

12 Responses to “It’s Not Goodbye”