Sometime early yesterday morning a nasty thunderstorm swept through the campground with rain, lightning, and thunder that sounded like an artillery barrage. It was good to be nice and cozy in our snug house on wheels while the storm raged outside.

Since we planned to stay home anyway, we weren’t in a big hurry to get up and about, and when we did, heavy clouds still hung overhead. I spent much of the day looking at online stock photos trying to find something that would work for a cover for my new book, without much success. I just don’t have a knack for that sort of thing, I guess. I can’t describe even to myself what I want, but I’ll know it when I see it.

A little after noon, the sky seemed to clear up and the sun was shining. Terry said maybe we should’ve planned to go out and play tourist after all, but within an hour the sky had turned dark again and the thunder was rumbling. Then it started raining in sheets and the wind was really blowing the trees here in the campground. I told Terry it looked like we were better off staying home after all.

It was a fast-moving storm though, and within half an hour or so so it started to clear up. Then it came back an hour or so later, although not as intense. Here’s a photo I took out the window after the rain had eased up a bit. 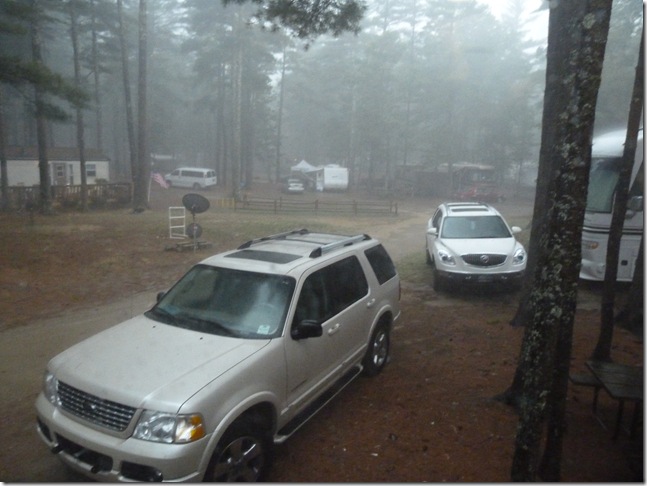 While I was pretending I was a cover artist, and proving to myself that I wasn’t, Terry started making some homemade spaghetti sauce. When I was younger a man, I got my nose busted a couple of times because I tended to poke it in places it didn’t belong, and as a result I have very little sense of smell. But the occasional whiff I did get of that sauce was wonderful.

Terry was multitasking most of the day; besides making the sauce she did a couple of loads of laundry, and put the finishing touches on the crochet project she has been working on. That lady is like the Energizer Bunny, she keeps going, and going, and going.

I’ll tell you what, Terry’s sausage pasta sauce over three cheese tortellini, topped with freshly grated Parmesan cheese, was a meal to savor. Delicious doesn’t begin to describe it. Later in the evening we had some of her freshly baked wheat oat flax bread from a loaf just taken out of the oven. Yummy!

If the weather cooperates today, we plan to drive to Fall River and visit Battleship Cove, which has a collection of US naval ships that includes the battleship USS Massachusetts, the destroyer USS Joseph P. Kennedy, Jr., and a couple of World War II PT boats, among others.

We have several other places we want to visit this week before we have to leave for Sturbridge next Monday, but a lot of it depends on the weather. The forecast right now calls for a clear day today and thunderstorms the rest of the week. We will just have to wait and see how it plays out.

Thought For The Day – If you talk to God, you’re praying. If God talks to you, you’re schizophrenic – Thomas Szasz

3 Responses to “Thunderstorms And Pasta”