I love traveling America’s two lane roads whenever we can, and except for one short stretch when U.S. Highway 60 joined the Interstate near Amarillo, all of this trip so far has been on those slower paced roads.

This is where you see the real America, where your route takes you right through the little towns where folks wave as you pass by, and where you find those small town diners that serve up a chicken fried steak that hangs off the edges of the plate and is toped by a tangy white gravy. This is where you have to be careful who you ask for directions, because sometimes the answer you get is “Go on down there to where the old Perkins’ place was and turn right, then drive a mile or so past Josh Mitchell’s place and bear to the left and it’s right around the corner.” 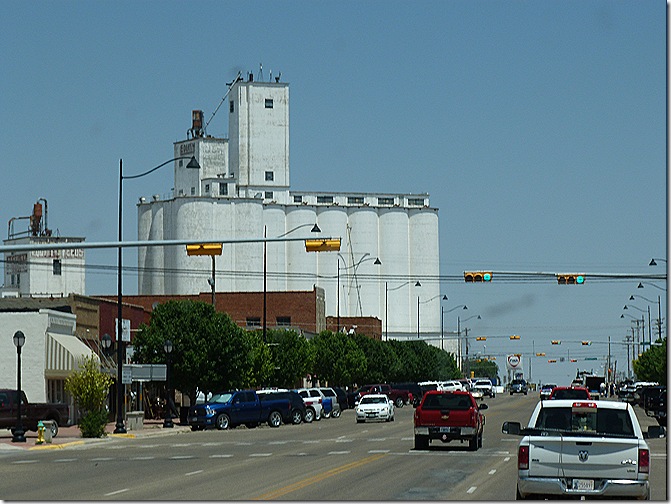 Then again, sometimes you get the response we did once at a convenience store in a small town in northern Alabama, where the clerk started to give us those kind of directions, saw the glassy look in our eyes and said, “Y’all ain’t from around here, are you?” I told him no, and he said to a customer standing there, “You watch the store and I’ll be right back,” then looked at me and said, “Follow me, I’ll take you there.” And he did, leading us over six or seven miles of back roads to deposit us right at our destination, then with a honk and a wave, he made a U-turn and went back to town and to work.

We left Amarillo Ranch RV Park yesterday morning, stopped to fuel up at the Flying J, and then drove northeast on U.S. 60 to Pampa, where we picked up State Route 70 and followed it north to connect with U.S. 83, which took us across the Oklahoma Panhandle and into Liberal, Kansas, home of the excellent Mid-America Air Museum and the Dorothy’s House Museum, celebrating the classic film The Wizard of Oz.

This is high plains country, but that doesn’t mean it’s all flat. We drove past some rugged draws and small canyons, and up and down some short, steep hills. 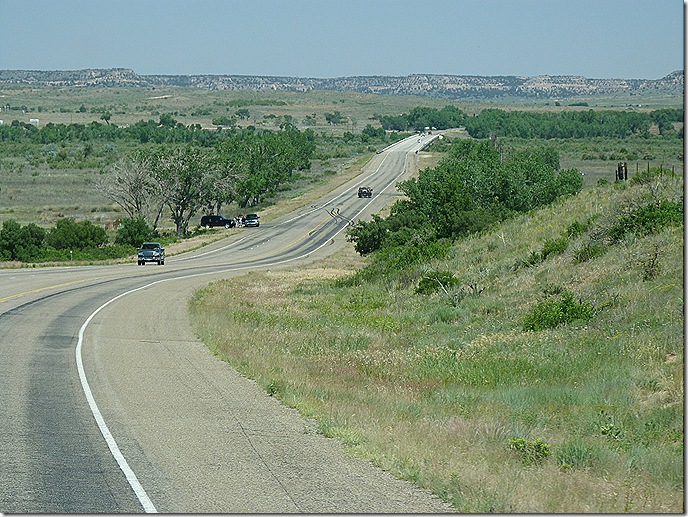 From there, we followed U.S. 54 northeast through Meade, home of the Dalton Gang Hideout, and then drove a few miles north to skirt the edge of Dodge City and get onto U.S. 56, which brought us to Larned Kansas. We covered just over 300 miles, and had a headwind much of the way. Our mileage was down to about 6.5 MPG, thanks to the wind. It was a pretty easy trip most of the way, except for one stretch where the strong wind was hitting us broadside and making the motorhome handle squirrely. But as long as I kept my speed under 55 it was manageable.

Sometimes you have to get over to make way for big pieces of farm machinery. 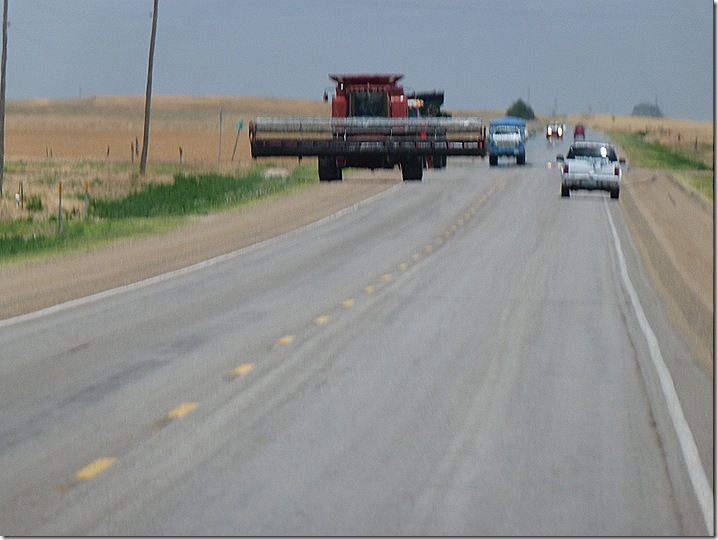 We passed a big wind farm that is still under construction. Those blades are huge! 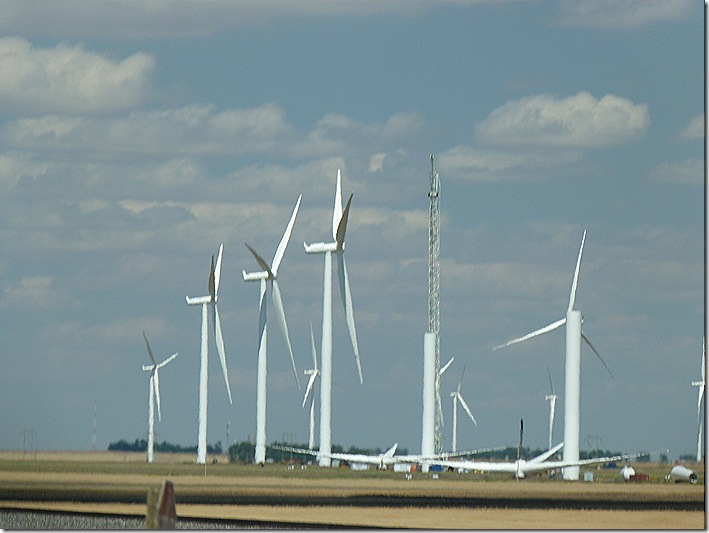 Larned is a clean, friendly little town, and we’ll be covering three stories while we’re here, Fort Larned National Historic Site, the Santa Fe Trail Center, and the Central States Scouting Museum. We were not sure where we’d find a place to park for the night, but when I stopped at the fairgrounds to inquire, someone gave me the home phone number of the Fair Director, who said to just stay right there and make ourselves at home. So here is our rig, all settled in. 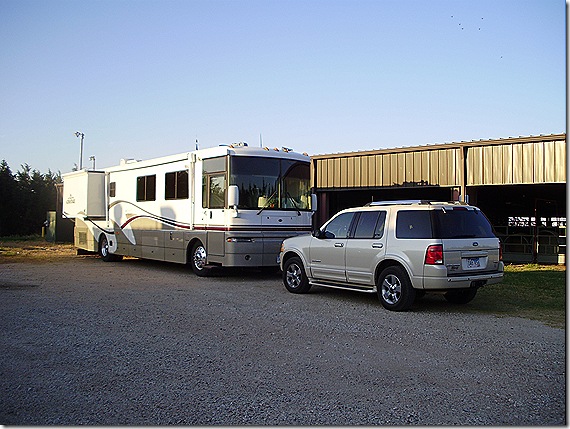 We drove into town and stopped at the Scouting Museum, which is housed in an old farm implement dealership. Even though it was 5 p.m. and they were officially closed, the nice man there gave us a quick tour, and then had us follow him downtown to the restored State Theater, which is a fantastic place. I’ll tell you how friendly Larned is; I asked a couple for a suggestion of a good place to eat and the husband said the best cooking in town was found in his wife’s kitchen, and they invited us to their house for dinner! We passed, but it’s just one more example of why I love small town folks.

There is a nice park at the fairgrounds, and we took a walk around the exercise path that circles part of it, checking out the different stations where you can do pull-ups, stretching exercises, a stair stepper, and such. Here is Miss Terry burning off some calories on the stepper. I got my exercise taking the pictures and cheering her on. 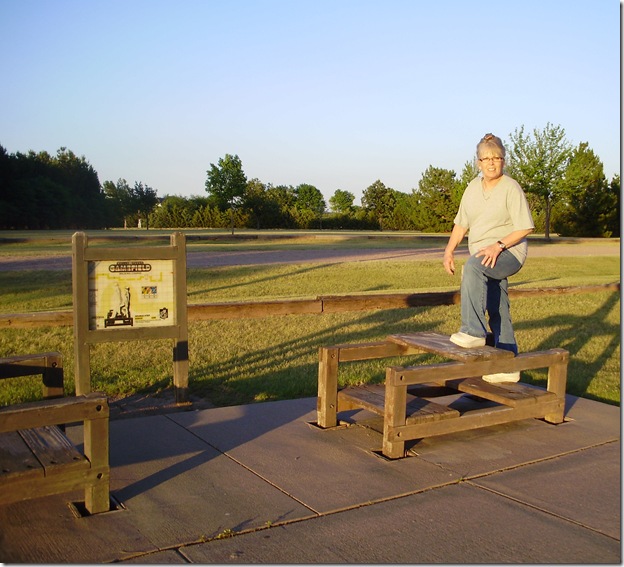 Larned is also home to Larned State Hospital, which at one time held as many as 1,500 patients, many judged criminally insane. For a time when he was a youngster, my author friend Randy Attwood lived on the grounds of the hospital, where his father was a dentist. Check out his e-book Crazy About You. It’s an excellent story. Randy told me that Larned is more eclectic than other small Kansas towns because the state hospital brought in a lot of foreign doctors who couldn’t work privately because they didn’t have U.S. licenses, but could work in a state hospital because the state had the power to waive licensing requirements. Thus a lot of doctors, psychologists, and psychiatrists from Cuba and other countries ended up in Larned.

We’ll cover our stories here today, and if we have time, we’ll drive a while and try to get some more miles behind us. We have an appointment at Blue Ox, in Pender, Nebraska on Monday morning, and it’s just about 400 miles from here to there.

Thought For The Day – I stayed up all night to see where the sun went. Then it dawned on me.