Nick's Blog » Back On The Road

Well, it took longer than expected, and we made a very nice donation to the economy of Redlands, California before we got out of town, but we’re back on the road.

The first thing yesterday morning the guys at Redlands Truck & RV Performance Center were hard at work on our Winnebago again, pushing to get us done by the end of the day. Rob Gambol discovered a couple of issues that needed attention, I brought up a thing or two, and by the time everything was said and done I think we have a new coach. Or least we rebuilt it to darn near new!

After installing the new PacBrake and repairing the exhaust leaks, things still didn’t seem quite right to Rob and shop owner Keith Shomaker. Further investigation by Rob revealed that where our exhaust pipe came into the muffler, it had never been installed properly. Instead of one slipping into the other and being secured by a wide clamp, the two pieces were just butted against each other and clamped down. Once he fixed that, there was a big difference in performance.

After all of the work was completed, here is a list of what was done: created access to top of engine from inside coach, installed new PRXB PacBrake  repaired three exhaust leaks, installed inside dual wheel tire valves, installed Safe-T-Plus steering control unit, repaired loose vent on engine compartment door, replaced two ride height valves, alignment, checked and cleaned transmission cooler, weighed coach. And, of course, they gave it a very thorough inspection to find and point out any future problems we might have. I believe in fixing things before they become a problem whenever possible.

Keith and Karen at Redlands had been apologizing to us for two days because things didn’t go as quickly as we had originally planned. However, the original plan didn’t include all the extra work we had done. And what did we care? We are always at home wherever we are! The quality of the work we received was excellent, and yes, it cost quite a bit of money, but if you want the best you have to pay for it. And it was still a lot less than most folks will pay to maintain a house in a year’s time. We are very pleased with our experience at Redlands and I have no hesitation at all in recommending them to anybody. These folks are pros and the best of the best. That’s why we drove all the way from the Phoenix area to have our work done.

We had the motorhome weighed at our rally in Yuma a couple of months ago by RV Weigh Portable Scales and our left front and right rear were both overweight. Since then, following the suggestions of Paul and Doris Cunningham from RV Weigh, we have been busy getting rid of a lot of stuff and also redistributing what we kept. Yesterday’s weighing showed that we’ve gotten rid of 475 pounds of excess weight, bringing the front end into just about perfect balance and at the correct axle weight rating. The rear is also closer to being balanced, although it will never be perfect because Winnebago puts the house and coach batteries and the basement air conditioning in the right rear. I can’t do a lot about their poor design.

We left about 5:30 PM and got on Interstate 10 headed east. There was a lot of traffic between Redlands and Beaumont, but then it thinned out quite a bit and we made good time. There was a steady breeze blowing from the right rear quarter, but nothing at all like what we had to deal with going into Redlands earlier in the week. And the Safe-T-Plus really did seem to help quite a bit. Neither the wind nor passing trucks affected us at all.

I could really tell the difference in performance with the new PacBrake. The one thing I have never liked about our Winnebago Ultimate Advantage was the exhaust brake. I had to downshift and get it up about 2,200 or 2,300 RPM to get any significant braking action, and even then I found myself using the brake pedal more than I wanted to. Between having the exhaust leaks fixed and the new PacBrake, I am seeing a big difference. Even at 1,400 RPM in sixth gear, if I take my foot off the throttle we start slowing down fast. I like it!

We didn’t go far, only about 60 miles to the Palm Springs Thousand Trails preserve, which is really in Palm Desert. This is a popular place with snowbirds and during the winter it can be hard to get into. But this time of year there are more empty spaces than occupied, and we had our choice of sites. 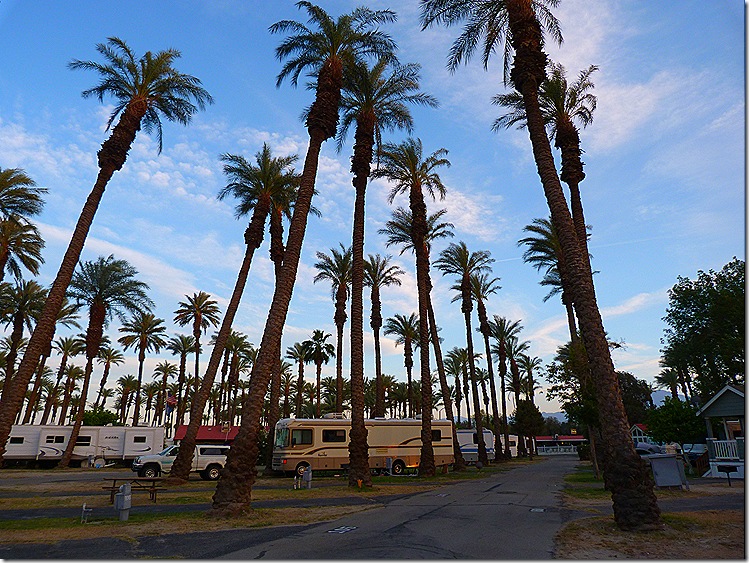 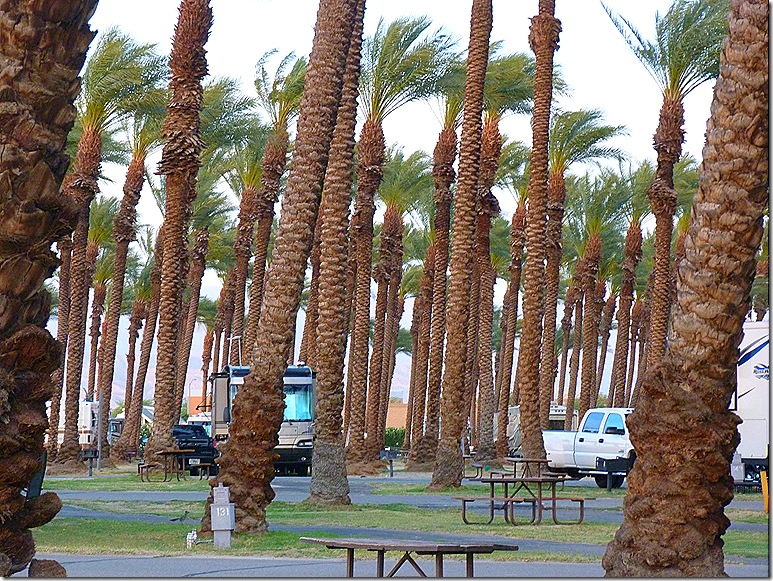 They have 50 amp sites available, but they are all back-ins. Since we were only going to be here one night and the breeze was keeping it cool, we chose a pull through 30 amp site instead so we didn’t have to unhook the Explorer.

The campground is full of tall palm trees, and Terry noticed that several of them had ladders going up the side at the very top. I guess this must be to make it easier to trim them? Or maybe they are date palms and the ladders are to harvest the dates? I don’t know. 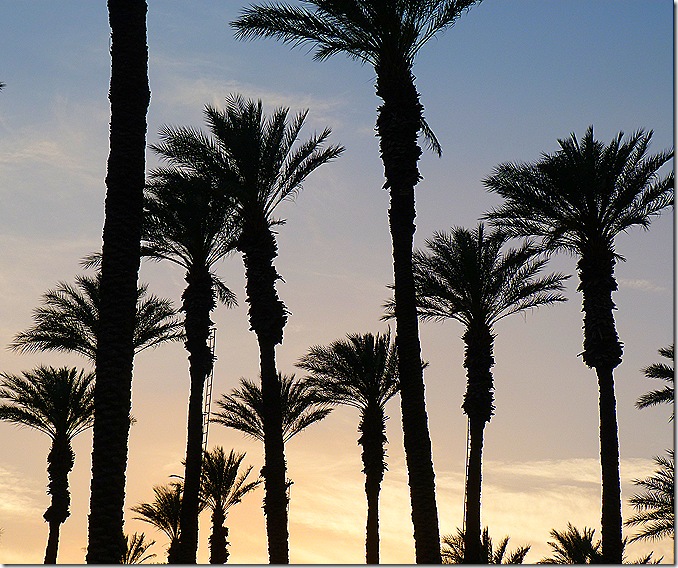 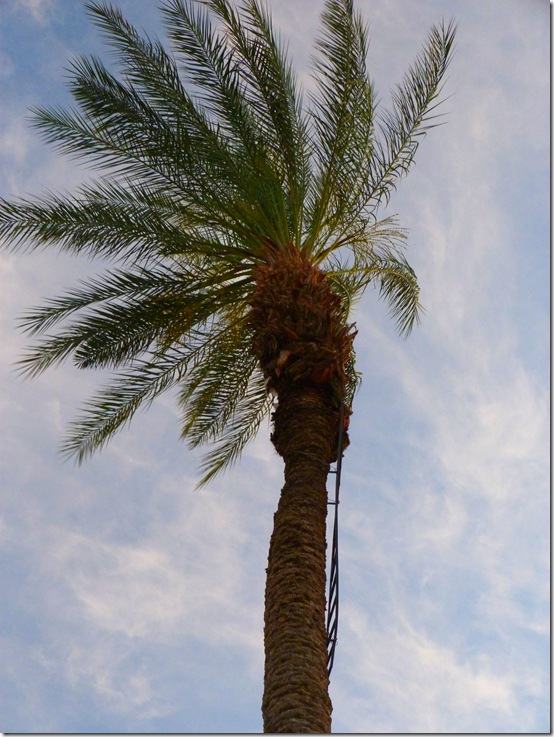 Terry was playing around with her camera and got a couple of neat pictures of the moon and the palm trees. How cool is that? 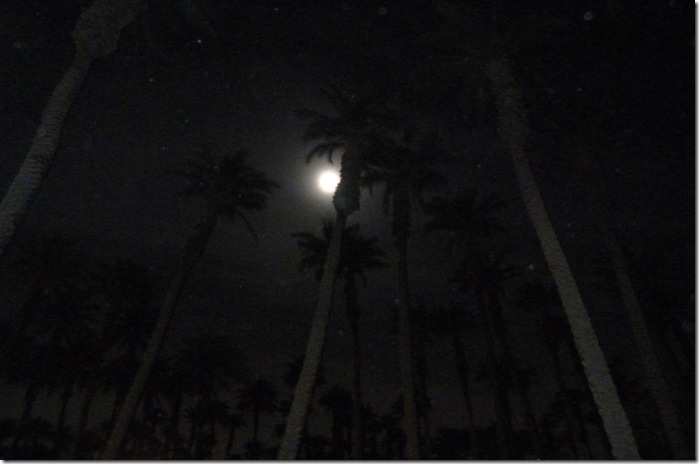 We won’t be here long, in fact we’re headed out again this morning if the weather will cooperate. We had strong winds overnight, but they were supposed to lessen up and we should be okay. We really want to get to the Verde Valley Thousand Trails preserve near Camp Verde, Arizona this afternoon. It’s about 340 miles, which shouldn’t be too much of a problem. Once we get there, we plan to take about a week and do absolutely nothing. We deserve it!

Thought For The Day – Pretending to be normal day after day is exhausting.

8 Responses to “Back On The Road”